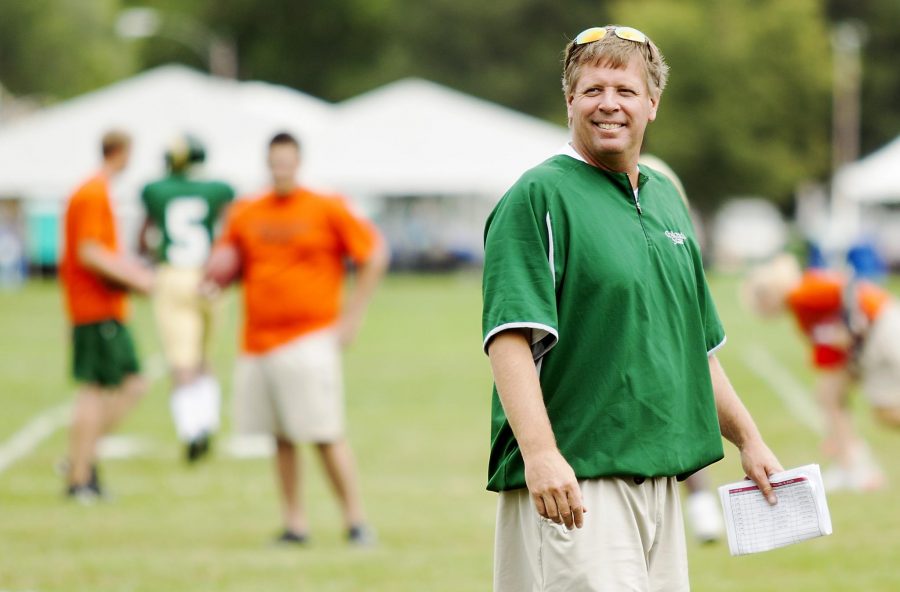 Coach Jim McElwain walks across the field during practice on Friday, Aug. 24. The Rocky Mountain Showdown will be McElwain's first regular season game as a head coach at CSU.

Today CSU President Tony Frank gave his approval of the construction of an on-campus stadium, citing his belief in its long term benefits.

“What would be in the best, long-term interest of Colorado State University well after our time to care for her has passed? In the end, I found that to again be the most useful lens through which to view the stadium issue,” Frank said in an email. “Against this backdrop, I think a well-maintained stadium located on the main campus, now with decades of tradition behind it, would be a great benefit to the university, providing a familiar venue for athletics, graduations, freshman convocations, band days and other large events. And so, with that long view in mind, I support our moving forward to attempt to build such a facility.”

Frank’s approval of the on-campus stadium comes nine months after the idea was introduced last December when Frank announced the hiring of new Director of Athletics Jack Graham.

Graham made his first hire in football coach Jim McElwain, who expressed his support of the stadium at his weekly Monday press conference.

“I think the momentum for the program is exponential. I’m not sure that you could put a degree even on it, yet I do know this; whatever they decide they’re going to do whatever’s in the best interest of this university for decades to come,” McElwain said. “It’s not just about the next two or three years. This is about something that people are going to put their arms around 50 years from now, and when you guys are sitting in 50 years from now listening to that next coach he’s going to thank them for what they did for this university and I believe that.”

McElwain said he felt the decision to build an on-campus stadium was one made with thought outside of the football program itself, which is off to a 1-4 start following three consecutive 3-9 seasons.

“It’s not just about the football, it’s about a commitment to excellence to everything we do,” McElwain said.

The on-campus stadium has been a lighting rod for debate, but McElwain isn’t worried about the decision distracting his players in preparation for this weekend’s homecoming game against Fresno State.

“No, I don’t think so,” McElwain said. “All of us have this clutter in our minds, which take focus away from the main objective, which our main objective is to get better today. Sounds like a broken record, but that’s how you’re successful.”

Even current players, who wouldn’t be around to play in the stadium if it were built, feel an on-campus stadium would go a long way to helping the program and the university.

“I think it will be great for the program,” senior corner back Marcus Shaw said. “I’m sure the school will make whatever the best decision is for the school and for the team, but I think it’ll be a great thing for the team and the campus.”