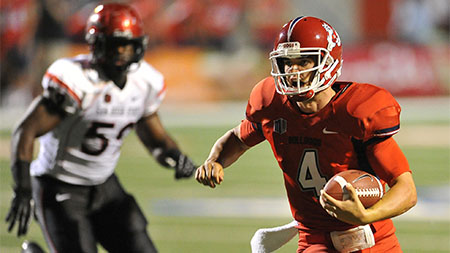 After four consecutive losses of 14 or more points and enthusiasm around the program waning, the CSU football team will have another chance to right the ship this Saturday during the annual homecoming game against Fresno State.

In order to stop their current slide, the Rams will have to get the running game going early in the game.

CSU has not had a 100 yard rushing game yet in any of its first five games this season, a trend it would like to stop with the help of running back Chris Nwoke, who had games with over 100 yards rushing in three of his last five games in 2011.

Fresno State will be looking to continue the Rams’ struggles while contending for its first road victory after experiencing a blowout loss at No. 4 Oregon in week two and a disappointing one-point loss at Tulsa two weeks ago.

“This week we know we’ve got a big challenge on our hands having to go on the road,” Fresno State coach Tim DeRuyter said. “We’ve not won on the road yet this year, (we’re) playing a CSU team that’s beaten us the last three times. …and so our guys know it’s gonna be a big challenge.”

In order to end their road struggles, the Bulldogs will have to continue their dominance on offense behind quarterback Derek Carr and Fresno State’s passing attack that averages 335.2 yards per game, which ranks the Bulldogs No. 11 in college football.

Execution is something that has been lacking during the Rams’ last four games as sloppy play on both sides of the ball have caused CSU to run up large deficits early in games.

Going into their second Mountain West game of the season, the Rams are still working on ironing out some of the details that haven’t been attended to and hoping that the passion the team had in their first game against CU-Boulder will be reignited this week.

“We don’t know until Saturday,” CSU coach Jim McElwain said of whether or not his team has that passion back. “I wish I had the crystal ball to say yes. I do know that it’s important to them, I do know they’re not out there not trying, you know, now lets grasp a little of what we had that first week.”