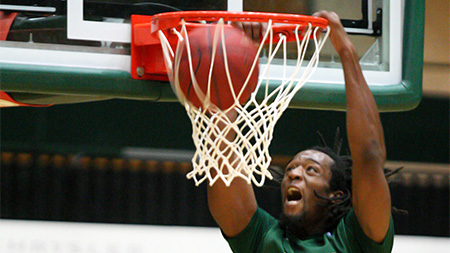 New CSU coach Larry Eustachy said he cares more about his team’s mindset on the court than the X’s and O’s of basketball.

He states and restates that “the offense will take care of itself,” and the Rams need to recommit themselves in terms of effort on the defensive end and hustle plays.

“We’ve got to change the culture. In my opinion, if we’re going to go to the next level with this team, that’s what we need to do,” Eustachy said.

CSU played against someone other than itself in Sunday’s 87-67 win over Metro State, and despite the 20 point win, the team acknowledges it still has a long way to go.

“We have to improve drastically over the next few weeks before we play Montana — we’ve just got to get tougher,” senior forward Pierce Hornung said.

When CSU defended Metro State the “right” way, the Roadrunners shot 19 percent from the floor, but when the team didn’t defend the “right way, Metro State made 65 percent of its shots, according to Eustachy.

“We just have to buy into that this is really what wins games,” Eustachy said. “What I’m selling is, no matter how bad we shoot, we can win games, and that hasn’t been the case because of a lack of depth.”

Eustachy has taken advantage of the depth on his team by ratcheting up the intensity of his practices and holding the team more accountable for its mistakes.

“Right now, we’re in better shape than we’ve ever been and we practice with no out of bounds,” senior guard Wes Eikmeier said. “Every drill we do if no one’s on the floor going after a loose ball, we’re running for it, we’re paying a price.”

The Rams’ coaching staff will take advantage of their depth not by giving their players more rest, but by extending their playing time in games and demanding a higher level of effort during those games with the expectation of more rest later.

“The body can take a lot, it’s just how mentally tough are you to serve it out,” Eustachy said. “I’m big on that, it’s a mental thing more than a wear-down physical thing. That’s what I think we really lack.”

CSU will have one more opportunity to test its mettle against another team before the Nov. 9 opener against Montana when the team travels to New Orleans Friday to scrimmage with Tulane.

The NCAA allows teams that play only one exhibition game to travel and play a scrimmage against another team as long as it is completely closed and not publicized at all.

“We’ve got seven practices left before we play a really good Montana team and we certainly won’t play our best,” Eustachy said. “These guys are going to get better and we’re just not going to be our best early.”