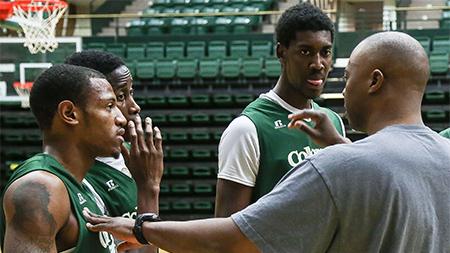 CSU’s opponents this season will have more to think about defensively than new coach Larry Eustachy did when he came to Moby last season as the head coach of Southern Miss.

Though the Rams return three starters and four other letterwinners, there are seven newcomers on the team that all have the potential to impact games.

The most prominent newcomers for CSU are newly-eligible transfers Daniel Bejarano and Colton Iverson. They sat out last season due to NCAA transfer rules after coming from Arizona and Minnesota, respectively, but played on CSU’s scout team and regularly bested the Rams’ starters.

Bejarano played in eight games for the Wildcats during his freshman season, but came to CSU after legendary Arizona coach Lute Olson retired and was replaced by Sean Miller.

Rivals.com ranked Bejarano as a four-star prospect and the No.18 point guard in the nation when he came out of North High School in Phoenix, Ariz.

Iverson scored 517 points in three seasons at Minnesota and collected two double-doubles. He will add some much-needed size to CSU’s front line and provide the experience of playing in the Big Ten conference.

“He’s going to make a huge impact and make everybody’s job a little easier,” CSU senior guard Dorian Green said. “Last year we had to double the post a lot and this year we won’t have to do that.”

The Rams added even more size with junior college transfer Gerson Santo. Originally born in Brazil, Santo averaged 7.4 points and four rebounds in two seasons at the College of Southern Idaho and was a member of the 2011 National Junior College Athletic Association national championship team as a freshman.

CSU had a logjam of talent at the guard position coming into 2012, but senior Jesse Carr tore his ACL during an offseason workout and will miss the entire year, opening up time for younger guards like sophomore transfer Johnathan Octeus and freshman Jordan Mason and Joe De Ciman.

Mason already made his mark on the team during a full squad scrimmage. His team was down by 20 at the halfway point, and he sparked them to an eight point win.

With all of these new, productive additions, the Rams possess a depth absent in recent seasons.

“What makes this team different is there’s competition. If somebody doesn’t feel like playing, or isn’t playing the right way, we have depth and that wasn’t the case last year,” CSU coach Larry Eustachy said.

That depth will allow the Rams to execute Eustachy’s fast, aggressive style with little fear of fatigue or a drop-off when the second unit takes the floor.

“You get to play harder and when you’re in there your minutes will be more efficient,” Green said. “We won’t have guys playing the amount of minutes we had last year, so we can play with more energy.”