Bye week much needed for banged up CSU football team 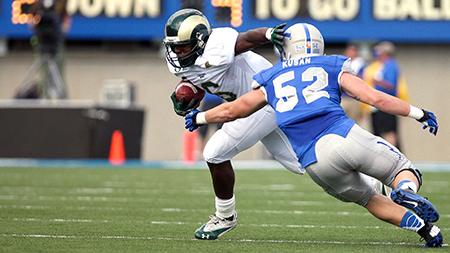 Chris Nwoke (6) runs past Josh Kusan (52) during the third quarter of CSU's game versus Air Force. The rams will be coming back from a bye-week to take on Hawaii this Saturday at Hughes Stadium.

If it wasn’t bad enough to struggle through a season with one win, CSU football has been forced to deal with a myriad of injuries to key contributors on an already young team. By accident or design the Rams’ bye week came at the perfect time.

“It’s nice (having a bye week) right here kind of at the halfway point,” junior H-back Jake Levin said Monday. “You do get to kind of reflect and see what you can change and what you will change going into the next half giving yourself a fresh start. It’s been very positive for us.

Through seven games this season the Rams have lost starting quarterback Garrett Grayson to a broken left collarbone, the team’s leading rusher from a year ago,Chris Nwoke, to nagging ankle injuries, senior cornerback Momo Thomas with season-ending shoulder surgery and even backup quarterback M.J. McPeek, who suffered a shoulder injury of his own against San Diego State.

That’s just to name a few. CSU has grown thin at safety, defensive line and most notably quarterback. Asking your third string, freshman quarterback to start is rather unfair, but Jim McElwain has no choice.

“I thought we got our starting quarterback Connor Smith really some valuable reps and we got him into it. Obviously he’ll go in as the starter,” McElwain said at his weekly Monday press conference.

Smith saw action in the Rams’ last game in San Diego completing 18-of-22 passes (81.8 percent) for 181 yards after McPeek left the game, but threw an interception and got sacked twice.

Like McPeek before him, Smith will have to learn what it takes to be a Division-I starting quarterback. Lucky for him there was a bye week first.

“When you know you’re going to be the guy there’s a heightened sense of intensity…I thought he did that and threw the ball around the yard pretty well,” McElwain said of his young quarterback. “Still took a sack down in the red area during the red area scrimmage and that was corrected. Still tried to fit a ball a couple times in where you know what, the reason the backs and the check down (are there) is to flip it to them. So those are all things that need kind of constant coaching, constant reminders and that’s how you become consistent at the position.”

McElwain and his coaching staff did have the opportunity to see more from other young players outside of Smith who will be asked to step in and fill the shoes of all the injured veterans.

“In our case we used (the bye week) from a fundamentals standpoint,” McElwain said. “It allowed us to get some guys, that haven’t maybe been playing a whole bunch, a good look and maybe see where they’re at and those are the things that we were able to reevaluate. I feel like we came out of it well. Now that’s to be determined on Saturday as well.”

In the end nobody was busier than the medical training staff.

“We obviously had some guys banged up. We had everyone in the rehab, in the training room,” linebacker Aaron Davis said. “They were definitely full this week.”