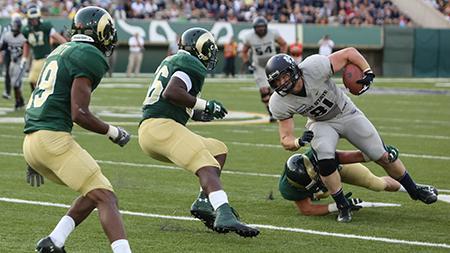 Utah State tight end Kellen Bartlett (81) is taken down during the first half of Saturday's game at Hughes Stadium. Despite outscoring the Aggies in the second half, Colorado State fell short to Utah State 30-19.

[flagallery gid=43 name=Gallery]
CSU is making a habit of falling behind early. Bad news is the Rams haven’t figured out how to get out from behind the eight ball.Utah State man-handled CSU at the line of scrimmage controlling the clock and the game on route to a 31-19 victory.

The Aggies wasted no time, striking on their first possession on a 26-yard run by running back Kerwynn Williams with 9:52 remaining in the first quarter.

“I thought the kids executed, made big plays, which they had to do. I am proud of the kids,” Utah State coach Gary Andersen said.

“I think it’s our mindsets. We have to come out and play a great game, every game, from the beginning like last game,” wide receiver Marquise Law said. “We have to drive the ball. Three-and-outs are killing us and we have to get going and get a rhythm going.”

By halftime, CSU was down 17-0, and it could have easily been 24-0 if not for the defensive effort of freshman safety Trent Matthews. Matthews stripped the ball just outside the goal line and corner Shaq Bell recovered the ball, essentially ending the half.

“(The defense) they really, I thought, showed flashes,” McElwain said. “I thought that they played hard. They gave up a big play there, but they came up with a couple turnovers and gave us an opportunity.”

CSU’s defense continued its strong play in the second half, turning Utah State over on three straight possessions going back to the final drive of the second half. However, the Rams could only muster six point off the three turnovers, proving to be costly in the end.

“Looking back, those are the things we need to capitalize one and it changes the game big time,” quarterback Garrett Grayson said. “Momentum goes toward us and the defense gets behind you and everything changes when you can do that.”

For most of the night the CSU defensive front couldn’t contain Utah State’s playmakers, namely Williams. Williams rushed for 205 yards on 21 carries, good for a 9.8 yard per carry average and two touchdowns.

“Kerwynn had some big plays tonight, with the help from the front line, for lots of yards, and it was great to see him have a performance like that,” Andersen said.

Sophomore quarterback Chuckie Keeton was the main focus for the Rams heading into the contest, but McElwain didn’t believe keying on him led to Williams’ offensive explosion.

“No, I don’t think so. We were in the wrong front one time that popped,” McElwain said. “It goes back to gap control.”

Keeton was efficient, going 23-for-30 for 178 yards and a touchdown, but did throw two interceptions.

It was a bit of a bounce back game for a banged up secondary unit that got abused against San Jose State.

“I thought our secondary, for the most part, stepped up and recharged a little bit,” McElwain said.

Now the Rams sit at 1-3 and must avoid demons from the past.

“The big thing is right now that we continue to move forward and not lapse into the past,” McElwain said. “I’m disappointed enough  for all of Fort Collins, all of Colorado and everybody that’s a Rams fan, but I will not let that get me down. I know what we’re doin’ is right, and our guys know it because I can see it in their eyes.”