CSU volleyball comes up short in upset bid against No. 2 UCLA at Moby Arena 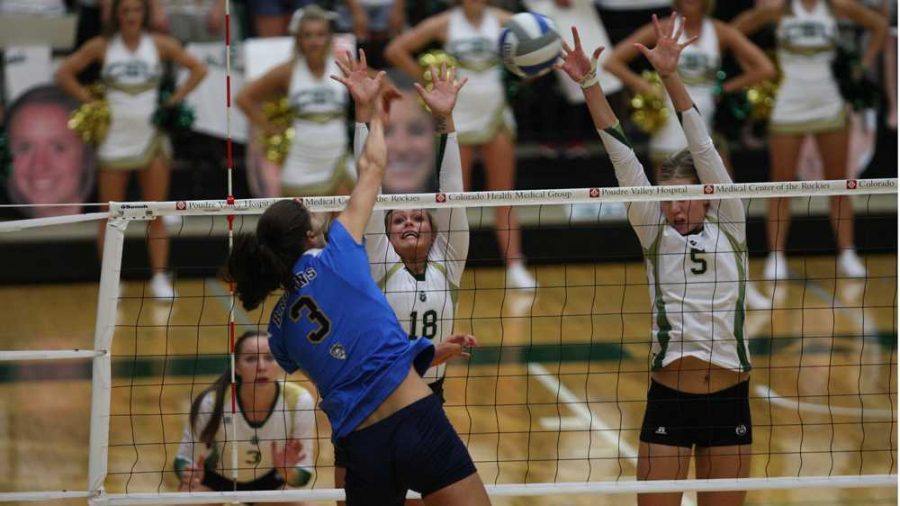 CSU fans prepared to storm the court, sensing another colossal upset, but No. 2 UCLA proved too tough in the fifth set.

The Bruins handed CSU its first home loss of the season 3-2 Saturday night in Moby.

“I’m not disappointed with the way we played, but we could have won,” CSU coach Tom Hilbert said.

The Rams led 9-8 in the fifth set, but got caught in a bad rotation and UCLA went on a 7-1 run to close the match out.

“We were thinking execute every single play and take it one point at a time. We did that and were tied 10-10 and couldn’t get one side out,” senior outside hitter Dana Cranston said.

CSU gave the defending champions everything they could handle, but UCLA extended its winning streak to seven matches and has only played one match at home in the John Wooden Center.

“There’s no pressure for anyone that plays against us. They can walk in the gym free and easy with no expectations on the result,” UCLA coach Michael Sealy said. “All year we’ve talked about trying to play fearless, and that’s a tough thing to do in such an adverse environment.”

Senior Tabi Love did most of the damage defending Plourde. She finished with four solo blocks to go along with a match-high 24 kills.

“That gal is such a good blocker that we couldn’t get kills. It psychologically messes with you a little bit,” Hilbert said.

Hilbert thought he could exploit Paige’s matchup in the middle, but she tried to finish balls straight down and couldn’t kill them.

“That’s not how you get kills when going up a blocker that you think you’re physically better than, you have to hit high corners,” he said. “We probably should have practiced that more this week.”

Sophomore outside hitter Kelsey Snider lead CSU with a career high 15 kills, including six in a dominant second set for the Rams. CSU hit .349 compared to .300 for UCLA and won 25-22 to take a measure of momentum back in the set.

“That’s as high a level of a set as we have played probably since I’ve coached here,” Hilbert said. “Let’s attach ourselves to that and say ‘that’s who we are.’ It’s unrealistic to think you can be that great every match, but by God if you do it once you can figure it out.”

The Rams start conference play Thursday September 20 on the road against New Mexico.

“This is as prepared as I’ve felt in all my years here. We played really good teams here and the full spectrum of teams,” Cranston said.

5,641 fans, the fourth largest crowd in CSU history, gave Hilbert the premier event he was hoping the match would be when he scheduled it.

“We entertained a giant crowd with really fun volleyball to watch,” Hilbert said. “We grow from this type of match, we really do.”

“It just stings, because we could have won.”