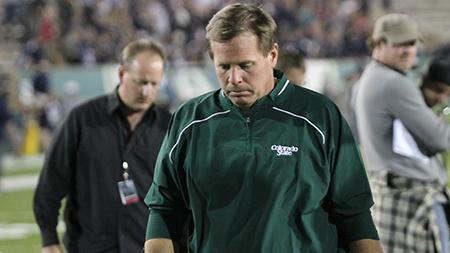 Head coach Jim McElwain walks off the field after Saturday nights loss to Utah State at Hughes Stadium. The Rams were outplayed on both sides of the ball and lost to the Aggies 30-19.

The sting of three consecutive 3-9 seasons can take its toll on a football team, but after starting 2012 off 1-3, the Rams are excited for a fresh start in Mountain West play this weekend against Air Force.
“We know we’re 1-3 but to be honest we don’t care,” quarterback Garrett Grayson said. “We know that was non-conference, we saw the mistakes we made. We’re going into conference now, it’s 0-0, anybody can win (the conference) and that’s our goal.”

Helping the Rams in their pursuit of the Ram-Falcon trophy this weekend will be running back Chris Nwoke, who will be in the starting lineup on Saturday and fellow running back Donnell Alexander, who has been taking full reps in practice this week.

Last season, Nwoke had a career day against the Falcons, carrying the ball 29 times for a total of 269 yards and two touchdowns.

The return of two playmakers on offense might help the Rams get into a rhythm offensively early on, as CSU has scored a total of 10 points in first quarters so far this year.

“We’ve just gotta establish (the run game),” Nwoke said. “We gotta get set and do the things we did in practice and just do it full speed, do it at a fast pace and play physical. And I think as we concentrate on doing that, we beat them down, I think we should be in good shape.”

The Rams have stressed repeatedly this week how they need to wear down Air Force, a task that’s not easy to do against a Falcons team that prides itself on its execution, particularly on offense.

Air Force has outworked opponents on the ground game early on this season, averaging a staggering 375.3 rushing yards per game, good enough to make the Falcons the second-best rushing team in the nation.

The success of Air Force’s rushing attack this year is largely because the Falcons execute their blocks and rarely take a play off according to CSU coach Jim McElwain.

“This also shows you where really our country is probably in pretty good hands,” he said. “Because you don’t see these guys taking a shortcut in anything they’re doing and that makes you feel comfortable as a U.S. citizen.”

In order to neutralize the Falcons’ rushing attack, the Rams will have to stop Air Force’s option offense, the likes of which CSU has not faced yet this season.

The danger for the Rams, however, is not focusing too much on stopping the run and getting beat with the deep ball.

The focus of the week for CSU has been execution and discipline in every aspect of the game.

So Saturday in Colorado Springs, a battle of wills will determine who starts off  strong in conference and who will bring home the Ram-Falcon trophy.