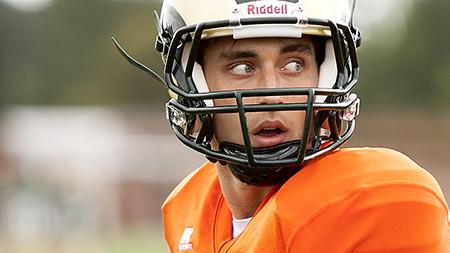 On Saturday night at Hughes Stadium, the CSU football team will take the field for the last time this year against a non-Mountain West opponent.

But facing off against Utah State this weekend provides the Rams with an opportunity to atone for losses to North Dakota State and San Jose State, and give CSU its first home victory under coach Jim McElwain.

In order to turn things around early on in the season, the Rams will need to control the line of scrimmage against Utah State, an area that has caused CSU trouble the last few weeks.

The Rams’ defense has focused this week on winning the battle at the line of scrimmage and making second-year quarterback Chuckie Keeton uncomfortable in the pocket.

“It was a big thing last week because we needed to get more pocket pressure,” CSU defensive lineman Zach Tiedgen said. “(It’s) more than like getting off blocks and getting sacks, as long as we get in his face and make pocket pressure we’ll be alright.”

Offensively, the Rams will look to mitigate the effects of the pocket pressure Utah State tries to put on CSU quarterback Garrett Grayson in an attempt to put up points against the No. 15-ranked scoring defense in the country.

For Utah State, the success of its defense early on has been attributed not only to the defensive scheme, but also to the attitudes of its players.

“It’s all about the kids in the end,” Utah State coach Gary Andersen said.

“They’re physical and they aren’t backing down from anybody. You’ve got to have that on defense if you’re going to be any good. They look forward to competing.”

In order to match the physical style Utah State plays, the Rams and Grayson will need to learn from the mistakes made in the second half against San Jose State.

A good second-quarter performance by the Rams last week gave way to a second half during which the Rams punted four times, turned the ball over twice and scored just one touchdown.

A difference-maker this week for CSU could be the return of running back Chris Nwoke, who the Rams hope will help them move the ball more effectively on Saturday.

“He’s a downhill runner, he’s gonna lower his shoulder and give some blows,” Grayson said. “We all know how Nwoke is, he’s a 1,000-yard rusher, so we’re glad to finally have him back.”

The Rams maintain they put no stock in moral victories because when they look back on the last two games, they know they’ve gone 0-2, a streak they would like to stop as soon as possible.

“Until we can start being consistent and start winning games, there’s no small victories right now,” offensive tackle Joe Caprioglio said. “We’ve been leaving offense out on the field, and so we can’t fall back and say it was good enough when it wasn’t.”