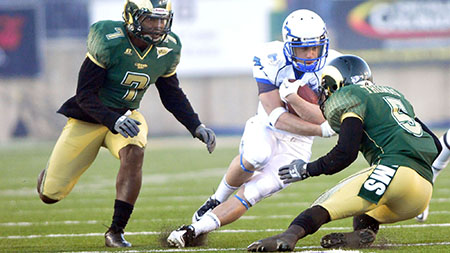 Air Force Academy wide receiver Jonathan Warzeka (15) picks up a first down against the ram defense during the first quarter of the CSU vs Air Force Game Saturday at Huges Stadium. Air Force won the game 45-21.

Defending against an option offense is one of the most difficult things for a defense to master.

Saturday afternoon, the CSU football team (1-3, 0-0 MW) will face that challenge as they travel to Colorado Springs to face rival Air Force (1-2, 0-1 MW) and its potent offense.

The Falcons have been successful  running their offense thanks to the ability of senior quarterback Connor Dietz to create plays with his arm and legs.

With Dietz at the helm, opportunities have opened up for starting running back Cody Getz, who enters this week averaging 153.67 rushing yards per game, which makes him the No. 2 rusher in the nation.

“Obviously he understands what he needs to do and does it great,” CSU coach Jim McElwain said. “When you get into that, sometimes you say ‘do you stop him?’ No, the key is probably is to contain him and not let him explode on you.”

In order to contain the Falcons’ rushing attack, the Rams might look to take a page out of UNLV’s playbook, who last week after trailing Air Force by 11 points at halftime put together three consecutive touchdown drives of over 60 yards while controlling the clock and keeping the ball out of Getz’ hands.

The running game, with the insertion of running back Chris Nwoke back into the starting lineup will be key for the Rams’ offense in slowing down Air Forces’ attack.

“LIke we’ve been trying to do the last few weeks, just gettin the run game going,” CSU quarterback Garrett Grayson said on what the offense has been focusing on this week. “And then obviously be consistent on third down, we wanna keep ourselves (the offense) on the field and keep our defense off the field. We’ve been kind of putting them in a bind lately with what we’re doing.”

For both the CSU and Air Force, the beginning of the 2012 season has presented numerous challenges as both teams have struggled out of the gate. Both McElwain and Air Force coach Troy Calhoun have stressed that the difficulties early on have given each an opportunity to teach their respective units how to execute better.

“There’s nothing you can do about yesterday–you can learn from it,” Calhoun said. “I’ve always felt that what you do today does have an impact on what you do tomorrow and for us, we’ve gotta keep playing ball and our endgame has to be to develop as a football team and just to learn and grow from the experiences that we’re able to gain each and every week.”