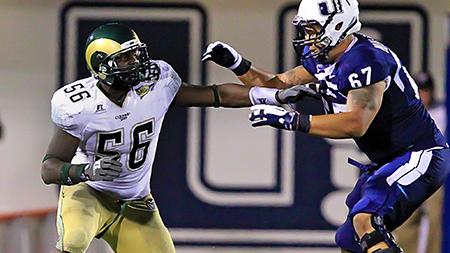 Over the last few years, the CSU football team has experienced some tough losses, but they pale in comparison to what Utah State has gone through.

Eight of the last nine games Utah State has played in have been decided by one touchdown or less, but the Aggies have a flair for the dramatic, winning six of those eight games.

Playing in highly competitive games every week makes the victories sweet but the losses, like last week’s 16-14 loss to Wisconsin, especially painful.

“This is a tough-minded crew,” Utah State coach Gary Andersen said. “All I hear is ‘Oh, another tough loss,’ but I guess the way I look at it is we won six of eight in the last seconds. I’m very proud of them.”

Last year when the Rams traveled to Logan, Utah, Utah State stayed true to form, losing a dramatic game to CSU in double overtime when running back Robert Turbin was stopped at the goal line on a two-point conversion attempt, giving the Rams a 35-34 victory.

This year, Utah State is looking to return the favor in Fort Collins.

“We know they’re a good team, they’re coming in here to win,” CSU quarterback Garrett Grayson said. “And obviously they wanna pay us back for what happened last year. We beat them at their place and they’re trying to come in here and beat us at ours.”

When Utah State makes its 31st trip to Fort Collins this weekend, it will be the last time the Aggies play CSU as an out-of-conference opponent because Utah State joins the Mountain West starting in 2013.

Preparing for a future conference foe and rebounding from a heartbreaking, last-second loss last week makes the game on Saturday one Utah State will not overlook.

“Is this an important game? It’s a huge game for us,” Andersen said. “It’s a team that beat us last year, it’s a future conference opponent. It’s on the road and we haven’t won on the road yet this year. Roll those things all up and this is a big football game.”

It’s a big game for CSU too.

The Rams have said they feel this weekend will provide them with the challenge of playing against a fundamentally sound football team while trying to stop their current losing streak at two games before heading into conference play Sept. 29.

In order to do that, the Rams need to shake off their sluggish start to 2012 to avoid another 3-9 season.

While the last two games have been difficult for the Rams, CSU coach Jim McElwain maintains that — despite the early struggles — there are reasons for optimism looking ahead at the rest of the season.

“It hurts,” he said of the back-to-back losses. “And these kids are starting to understand that taste and don’t like the taste. Now, I’ve seen some building and seen some guys that are really putting forth the effort to make it right, but when (that’s) all they’ve known for so long, that’s hard.

“But I’m gonna say this — our foundation is strong and you know, I’m really looking forward to something good happening to these guys.”