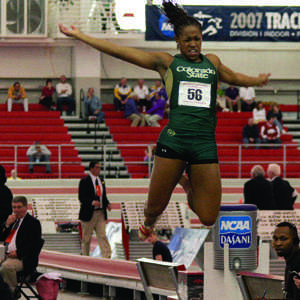 Athletes from CSU have represented the USA in every summer Olympic games since 2000. Former All-American long jumper Janay DeLoach will continue that tradition in London later this summer.

She finished third in the 2012 US Olympic Trials long jump final with a jump of 7.08 meters. Brittney Reese placed first and Chelsea Hayes came in second to round out the team.
“It was a long, drawn out process that was very stressful,” DeLoach said. “I was really kaput and exhausted at the end of it.”

“I knew I still had to work,” she said. “These girls were jumping fantastic.”

Her initial jump would have been enough to qualify, but her final jump cemented her position in London.

“My coach and I decided my goal wasn’t just to get to the Olympics,” DeLoach said. “My goal is to medal.”

DeLoach reached this point by re-committing herself to her technique and focusing on taking care of her body.

“It wasn’t until this year I really took my diet seriously. I didn’t quite understand what it took to be in the absolutely tip top shape you can be in,” she said. “It makes a huge difference in how you feel. You can push your body much further when you’re taking care of it.”

CSU track and field coach Brian Bedard noticed DeLoach improve during her years as a Ram and saw her commitment increase when she graduated.

“She kept working, looking for ways to get better. She re-committed herself year after year,” he said. “Her passion for the sport continued to grow.”

Even with DeLoach’s success, not every former CSU athlete at the Olympic trials reached their ultimate goal.

“The real challenge is everything coming together at the right time,” Bedard said. “Casey Malone was the best discus thrower in the US for two years and then he got injured. Practice wise he was way behind where he needed to be.”

Despite only one former CSU athlete making it to the Olympics, having so many in the Olympic trials can do wonders for CSU’s track and field program.

“It’s huge from a recruiting standpoint,” Bedard said. “It gets our foot in the door and shows recruits that coaches here have the ability to coach them at a high level.”

“That says something about the program and what we can offer,” DeLoach said. “If I’m working out in the weight room and they bring in a recruit they can point and say ‘she’s an Olympian.’ I’ll always be an Olympian.”
Related articles