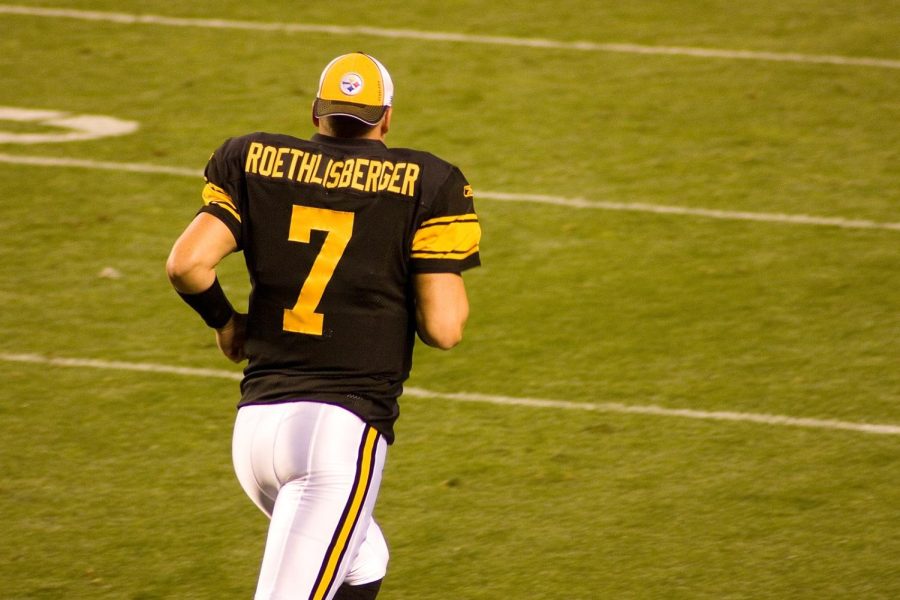 Quarterback Ben Roethlisberger (7) of the Pittsburgh Steelers jogs on field prior to a game Sept. 29, 2008. (Photo courtesy of Andy via Wikimedia Commons)

The NFL is certainly no stranger to controversy. Through the actions of superstars such as Antonio Brown, Kareem Hunt, Ben Roethlisberger, Ezekiel Elliott and more, the league seems to turn out scandals like a well-oiled machine at this point.

Most recently, the NFL oversaw the conclusion of its latest — and arguably largest — superstar controversy.

Last month, superstar quarterback Deshaun Watson was dealt from the Houston Texans to the Cleveland Browns in a blockbuster trade. This historic deal resulted in the Browns forking over five draft picks to the Texans, three of which being first-round picks. The Browns also provided Watson with a five-year contract extension for $230 million guaranteed.

While the deal undoubtedly changed the competitive landscape of the league, it may have had even larger ramifications off the field.
“It’s disgusting that someone involved in such troublesome allegations — not to mention such a high amount of them — continues to be valued so much by the NFL. Sadly, though, it does not come as a surprise, given the league’s disturbing history of inaction in similar instances.”
Watson notably sat out the 2021 NFL season in demand of trade, and during his hiatus from the field, an astonishing amount of sexual assault and misconduct allegations begin to pile up against him. As such, potential suitors from around the league backed off on Watson trades while both the NFL and federal law enforcement investigated the allegations.

Initially facing 10 criminal complaints and a whopping 22 civil lawsuits, Watson was cleared of criminal charges in nine of the complaints by a Texas grand jury on March 11 — just one week before his trade was announced.

Despite the fact that Watson still faces 22 active civil lawsuits, teams around the league immediately jumped into an intense bidding war for Watson once it became clear he would not face prison time.

In fact, he was even granted permission to pick the team he wanted out of the trade offers. Watson was able to interview each team inquiring about him and ultimately select whichever franchise gave him the best offer.

It’s disgusting that someone involved in such troublesome allegations — not to mention such a high amount of them — continues to be valued so much by the NFL. Sadly, though, it does not come as a surprise, given the league’s disturbing history of inaction in similar instances.
“It’s worth noting a number of less talented players have seen their careers entirely derailed for far less troubling controversies.”
Ricky Pulley Jr. is a men’s violence prevention coordinator as well as a gender justice trainer and consultant. In his position, Pulley deals with matters of sexual assault and misconduct on a daily basis.

“It’s not my place to determine innocence or guilt,” Pulley remarked on Watson’s 22 pending civil lawsuits. “What I will say is that we know, even with the myths we often hear, the vast majority of victims that come forward to report are not lying. … In fact, men are more likely to be victims of sexual violence than they are to have someone falsely accuse them of sexual violence.”

Further highlighting the issue with both our nation and the NFL’s culture regarding sexual violence, it’s worth noting a number of less talented players have seen their careers entirely derailed for far less troubling controversies.

“I definitely think being a quarterback who is extremely gifted with regards to his abilities on the field helps,” Pulley explained. “In a ‘win now’ league, people are willing to overlook the transgressions of a franchise quarterback.”

It should also be noted that the NFL is able to suspend its players regardless of whether or not they face criminal charges. As such, it’s likely Watson will face somewhere between a six to eight game suspension this coming season.

With that being said, something tells me Watson won’t think twice about his small incoming suspension, especially considering he’s fresh off of signing a $230 million guaranteed contract extension.