Hontz: Congress must act to uphold public trust in the Supreme Court 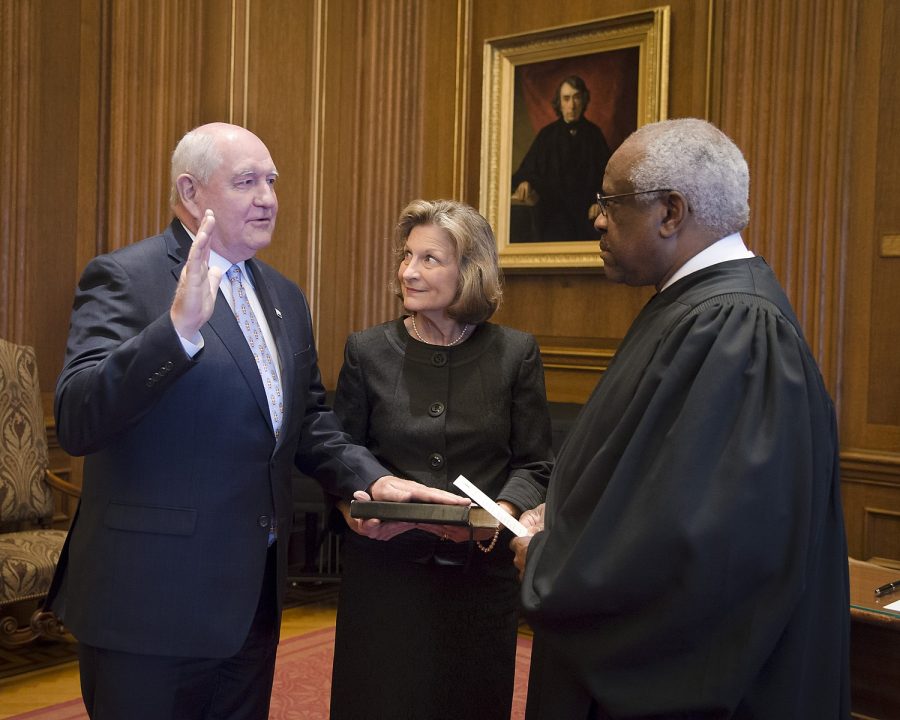 Sonny Perdue is sworn in as the 31st secretary of agriculture by U.S. Supreme Court Justice Clarence Thomas with Perdue's wife, Mary Ruff, and family at the Supreme Court in the District of Columbia April 25, 2017. (Photo courtesy of Preston Keres via Wikimedia Commons)

In the 232-year history of the United States Supreme Court, only one Supreme Court justice has ever been impeached.

Despite this historical hesitancy of the American government to impeach justices, it’s becoming excruciatingly clear that Congress should act to hold Justice Clarence Thomas accountable for his recent actions.

For those who are unaware of the recent controversies regarding Thomas’ wife, Virginia “Ginni” Thomas: Her reckless promotion of conspiracy theories and questionable involvement with the Jan. 6, 2021, Capitol insurrection have directly compromised her husband’s ability to effectively carry out his duties.

Recently, the United States congressional committee investigating the events of Jan. 6 acquired text message records from former President Donald Trump’s Chief of Staff Mark Meadows. Within these texts, the committee confirmed there were 29 messages exchanged between Meadows and Ginni Thomas during the three-month span of November 2020 to January 2021.

Many of these messages contained efforts on Ginni Thomas’ part to pressure Meadows into attempting to overturn the 2020 presidential election results — actions influenced by her belief in the theory that the 2020 election was rigged against Trump.

In addition to these text exchanges between Trump’s chief of staff and the Supreme Court spouse, Ginni Thomas was also found to have further promoted these baseless conspiracies on her husband’s private email mailing list.

One notable member included in Clarence Thomas’ private mailing list was John Eastman. Clearly influenced to at least some extent by Ginni Thomas’ inappropriate use of the mailing list, Eastman has since become one of the country’s most prominent supporters of Trump’s baseless claims that the 2020 election was rigged.

Courtenay Daum is a political science professor at Colorado State University, and she specializes in matters regarding American constitutional law and the U.S. Supreme Court.

“The real issue of concern here in the context of the U.S. Supreme Court is not that Ginni Thomas is a political activist who believes and traffics in conspiracy theories but rather that her husband has refused to recuse himself from cases that involve issues that his wife is deeply involved in both personally and professionally,” Daum said.

“While there are (no) formal rules and regulations governing when justices should recuse themselves, it is abundantly clear that (Clarence) Thomas’ failure to do so in these types of cases raises ethical concerns while simultaneously undermining public confidence and trust in the U.S. Supreme Court,” Daum said.
“Congress could pass legislation governing judicial ethics and imposing transparency for disclosing potential conflicts of interests on Supreme Court Justices, and I think this type of legislation might assuage the concerns of some members of the public.” -Courtenay Daum, CSU political science professor
Considering Clarence Thomas’ blatant mishandling of the cases in which his wife is directly implicated, is it feasible he could actually face impeachment from the Supreme Court?

“All of that being said, I do not think that impeaching (Clarence) Thomas is likely or viable,” Daum stated.

“A conviction in the Senate requires the support of 2/3 of the senators, and that is inconceivable right now,” Daum continued. “The fact that only three Republicans voted to confirm the first Black woman to the U.S. Supreme Court just two weeks ago demonstrates how unlikely it is that multiple Republican senators would support the impeachment of (Clarence) Thomas, who is a hero to many on the right.”

So if impeachment is virtually impossible due to the hyperpartisan nature of our nation’s Senate, how can Clarence Thomas be held in check?

“Congress could pass legislation governing judicial ethics and imposing transparency for disclosing potential conflicts of interests on Supreme Court justices, and I think this type of legislation might assuage the concerns of some members of the public,” Daum said.

Regardless of whatever form such legislation may take, it’s abundantly clear that something must be done in the immediate future to prevent Clarence Thomas and others on the court from abusing their power, as both the public perception and legitimacy of the court may very well hang in the balance.