Trash Talk: Denver Broncos making moves; where do they go from here?

After acquiring a new head coach and superstar quarterback Russell Wilson, the Denver Broncos have signaled they are once again ready to contend for a Super Bowl title. 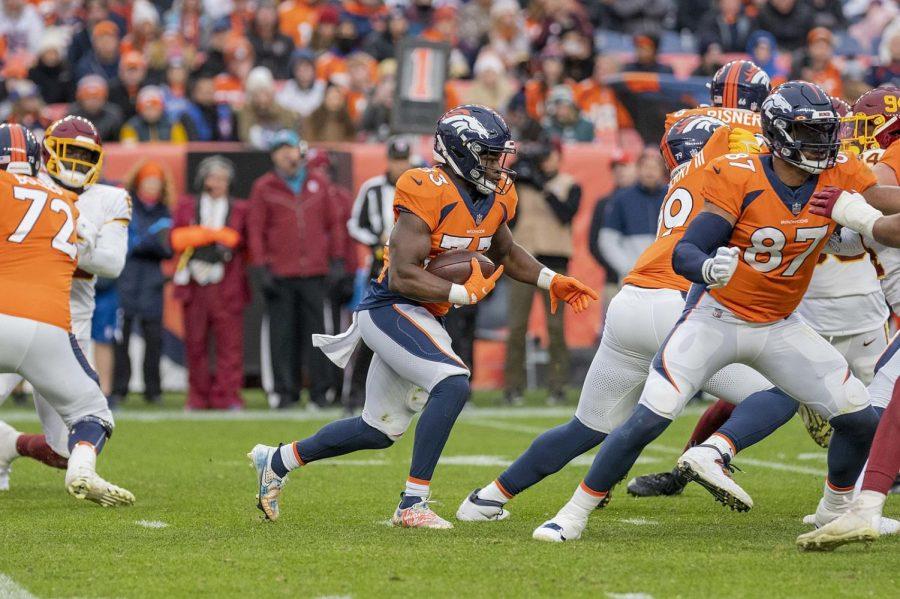 Javonte Williams (33) runs the ball against the Washington Commanders at Empower Field at Mile High in Denver Oct. 31, 2021. (Photo courtesy of All-Pro Reels via Wikimedia Commons)

Since the start of the NFL offseason, the Denver Broncos have dramatically altered the course of their franchise both by hiring an offensive-minded coach and also acquiring Super Bowl-winning quarterback Russell Wilson. Considering this, I feel it’s only fair to assume the organization has been taking advice directly from my writing. In my previous article, titled “The Denver Broncos: 5 years of irrelevance,“ I suggested the organization begin its offseason by taking these two major steps.

As such, I now consider it my own personal responsibility to guide the Broncos organization forward. In the best interest of both the organization and its fans, I’d like to take this opportunity to highlight how the Broncos can best navigate their way through the remainder of this NFL offseason’s free agency period.

In the time since the organization’s hiring of coach Nathaniel Hackett and its blockbuster trade for Wilson, the team has been relatively conservative in its approach to free agency. Aside from some minor contracts given to a small group of depth players on both sides of the ball, the only two starting-caliber players the team has acquired since the Wilson trade are defensive tackle D.J. Jones and outside linebacker Randy Gregory.

As such, the Broncos currently stand with somewhere around $15-20 million in cap space and eight draft picks in this year’s coming NFL draft.

So where does the team go from here?

While $20 million in cap space isn’t a game-changing amount in the NFL, it’s certainly enough for the team to add a pair of impact players prior to this year’s draft.

The first roster hole the Broncos must address is the cornerback position. More specifically, I believe the team desperately needs a competent slot cornerback. The simplest solution for this particular position would be to re-sign Bryce Callahan. However, while he has been productive when healthy, Callahan’s long history of being injury-prone may deter the team from bringing him back.

In this instance, I’d recommend the Broncos consider a reunion with Chris Harris Jr. Since leaving the team for the Los Angeles Chargers in 2020, Harris has proven that despite his age, he is still very productive in the slot. In addition to this, Harris’ experience as a veteran combined with his familiarity with the Broncos organization would position him as an invaluable voice in the locker room. Betting on a proven veteran rather than the potential of a younger player is a move that makes more sense for this true contender of a team that is seemingly ready to push in all of their chips for this coming season.

The next position I’d suggest the Broncos look at upgrading through free agency is running back. While second-year back Javonte Williams is poised to become the team’s workhorse after an impressive rookie season, the depth behind him is lackluster at best. The most obvious solution to the Broncos’ lack of depth at the running back position would be to re-sign running back Melvin Gordon III. Gordon recently expressed interest in returning to the Broncos for the upcoming season, and the team should be eager to do so as well.

While Gordon is not the same Pro Bowl-caliber player that he was earlier in his career with the former San Diego Chargers, he’s still a more than serviceable back with an abundance of experience and an overtly positive locker room presence. A deal that would place him in a change-of-pace role as Denver’s backup to Williams would be beneficial for both Gordon and the Broncos team.

By returning to the team in its newly established contender form, Gordon would have a legitimate shot at winning a Super Bowl title. In return, the Broncos would feature arguably the best one-two punch in the league at the running back position, and the team would also be able to hold on to a starting-caliber player in the event of Williams’ injury.

As made clear through my two free agency suggestions, I believe that now as a true contender, the Broncos should prioritize reliability, experience and leadership over potential. By trading for Wilson, the team signaled that it’s prepared to go all-in for the pursuit of a Super Bowl title. Moving forward, it’s imperative the team’s free agency signings reflect this sentiment.