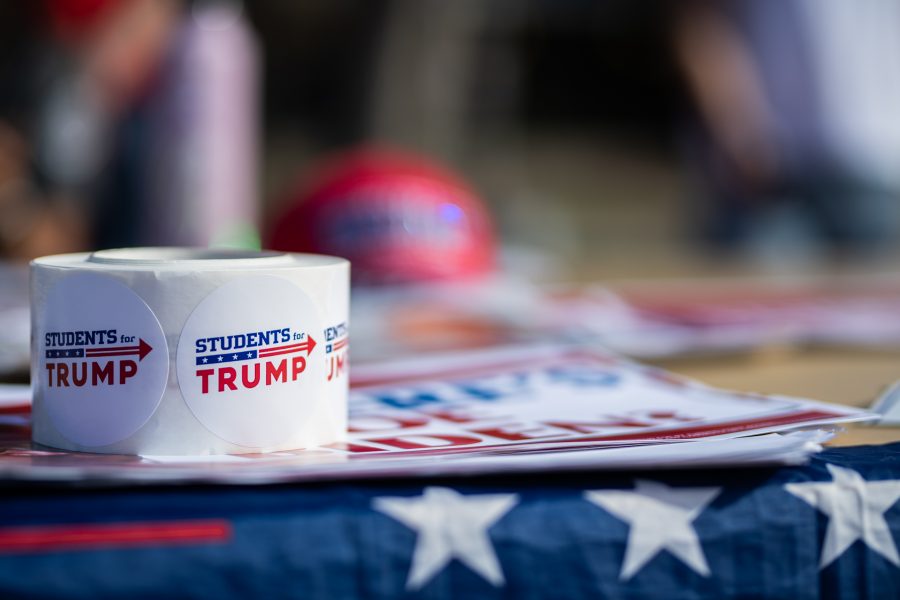 Students for Trump stickers on the Students for Trump table Nov. 3. “I know it’s a controversial image for us to have,” co-founder and Vice President Gabby Reichardt said. “But it is really a place for people to come and talk those issues out, those social issues, the way they want to vote and really tease out some of those conversations, since it can get a little hostile in other areas of campus.” (Lucy Morantz | The Collegian)

Jan. 20 marked the one-year anniversary of President Joe Biden’s inauguration. Adding to the date’s significance, Jan. 20 also marked one full year from the official end of what was arguably the most disastrous presidency in American history.

When former President Donald Trump vacated the White House over a year ago, many Americans hoped and believed his chaotic reign over the nation’s politics had finally come to an abrupt end. Any chance of Trump maintaining control over the Republican Party likely diminished due to the Capitol insurrection following his accusations of widespread voter fraud only two weeks prior to leaving office.

With Trump gone, American politics could finally return to some semblance of civility and normalcy. The Republican Party was no longer led by Trump and could finally end its sycophantic relationship with the former president. At least, that’s how it seemed, right? As the following months demonstrated, this belief could not have been further from the truth.

The brash, ruthless and combative brand of politics became a template in which the majority of the Republican Party frantically reshaped itself to fit within. Through both the 2016 and 2020 elections, Trump proved there was a large portion of the country whose vote could be won over with far-right ideologies and hateful rhetoric targeted at varying ethnic, religious and racial groups.
“Whether Trump becomes president again is not really the point. Although another Trump presidency could very well deal the final blow to our nation’s treasured democracy, I fear that such an outcome has already been made inevitable as a result of Trump’s first go-around.”
In exchange for breathing life back into the fear-mongering political tactics that had previously been perceived as a relic of our country’s troubled past, Trump was all but anointed as the unofficial king of conservatism in the United States. The Republican Party was no longer the party of Abraham Lincoln. In fact, it wasn’t even the party of George W. Bush, John McCain or Mitt Romney any longer. The Republican Party belonged — and continues to belong — to Trump.

Again, this became abundantly clear in the months that followed Trump’s departure from office. As the former president descended further and further into conspiracy and rage, a lot of Republicans followed closely behind. Republicans throughout the party began to downplay the horrific nature of the Jan. 6, 2021, Capitol insurrection. Furthermore, the party shamelessly began to assist Trump in peddling his baseless and dangerous claims that the 2020 election was rigged against him.

Further displaying the complete control over the Grand Old Party that Trump has continued to enjoy following his presidency, any member within the Republican Party who dared to speak out against Trump’s disgraceful claims or actions has seen their career in politics be derailed.

Additionally, Trump has opened the door for a new generation of politicians to enter the fold — all of which are molded directly in his image. As a direct result of Trump’s influence on incoming GOP members, we have seen far-right conspiracy theorists and Trump sycophants such as Georgia Rep. Marjorie Taylor Greene, Florida Rep. Matt Gaetz and Colorado’s own Rep. Lauren Boebert plague the integrity of our nation’s governing institutions.
“It appears as though Trump’s rise to power was not the short-lived wound to American democracy that I and many others once hoped it to be.”
Trump has been constantly — and very publicly — flirting with the idea of running for a second term in the upcoming 2024 presidential election. If the actions of the GOP over the last year were not enough to enable Trump to run a second time for the Oval Office, a series of recent polls showed he is the most desired candidate for Republican voters for the 2024 election.

Whether Trump becomes president again is not really the point. Although another Trump presidency could very well deal the final blow to our nation’s treasured democracy, I fear that such an outcome has already been made inevitable as a result of Trump’s first go-around. During his four years in power, Trump fundamentally altered the trajectory of our nation in ways that appear to be irreversible.

After leaving office as the only president to have ever been impeached twice, Trump left our nation’s democracy on the brink of total collapse. Of the countless failures and catastrophic mistakes made throughout his presidency, Trump’s most detrimental impact on our country has been the normalization of domestic terrorism, authoritarian politics and the seemingly altered reality of alternative facts in which he lives.

As we currently stand one year later — despite the evidence that would suggest his presidency was a disaster of unparalleled proportions — Donald Trump is practically worshipped by some people.

It appears as though Trump’s rise to power was not the short-lived wound to American democracy that I and many others once hoped it to be. Instead, the impact of Trump upon our nation’s democracy seems to be far more comparable to that of a seeping gash that only worsens with time.