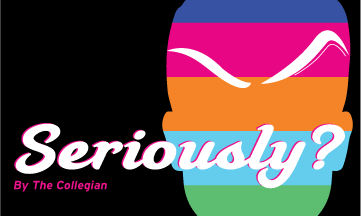 If you ask any Colorado State University student, scroll through any CSU meme page or even just go to a CSU football game for yourself, you’ll find a common theme — everyone is disappointed with our school’s football team.

Our football season has been rough so far. Between upset losses, failed comebacks and awful defense, we’ve struggled with a 1-3 start this year. It’s really no surprise, though, since the team hasn’t had a winning season since 2017. To put it bluntly, CSU students have just gotten used to sucking at football.

But right now it’s Homecoming week, and we’re trying to reflect on the time-honored traditions that tie together Rams of the past and Rams of the present. As it turns out, one of the best, most long-standing traditions here at Colorado State is just that — having a bad football team.

Rather than being embarrassed or upset about our bad football performances in recent years, we should embrace this  time-honored tradition and celebrate how awful our team is.”

After sifting through a bunch of articles published by The Collegian dating back to 1961, there was a clear theme — CSU just isn’t good at football. One particular game in 1971 described how the student section had fun despite the team’s sucky performance on the field. Instead of passively watching Utah State University beat the Rams 18-17, drunk and rowdy students started a snowball fight that pummeled both fans and the team. As weird as it sounds, this little episode inspired me.

The 1971 football team — quite frankly — sucked. And sucked hard. They got massacred game after game after game, struggling to a 3-8 record after losing the first eight games of the season.

If a small group of CSU students sitting in below-freezing temperatures to watch such an awful team could still have a good time, why can’t we?

Rather than being embarrassed or upset about our bad football performances in recent years, we should embrace this time-honored tradition and celebrate how awful our team is. I mean, isn’t it kind of impressive that we can be so bad for so long? I feel like that takes more effort, skill and luck than being good at football.

Let’s be real here. Nobody really goes to football games to watch the game anyway. You go to get drunk at the tailgate beforehand, stumble your way into the student section with a bunch of frat boys, sorority girls and other students who are all also drunk and cheer when everybody else cheers.

I’d argue that 75% of the people in the crowd don’t know what football even is. If nothing else, our poor play on the field should give us even more of an excuse to get more drunk and have more fun.

So you know what? This Saturday, when we take on San Jose State University in the Homecoming game, just go to have fun. Go get sloshed with your friends in the Moby Arena parking lot beforehand, and remember when we get absolutely demolished by SJSU, you’re taking part in one of CSU’s best Homecoming traditions — watching your football team lose.