Tusinski: Fort Collins is not exempt from the alt-right 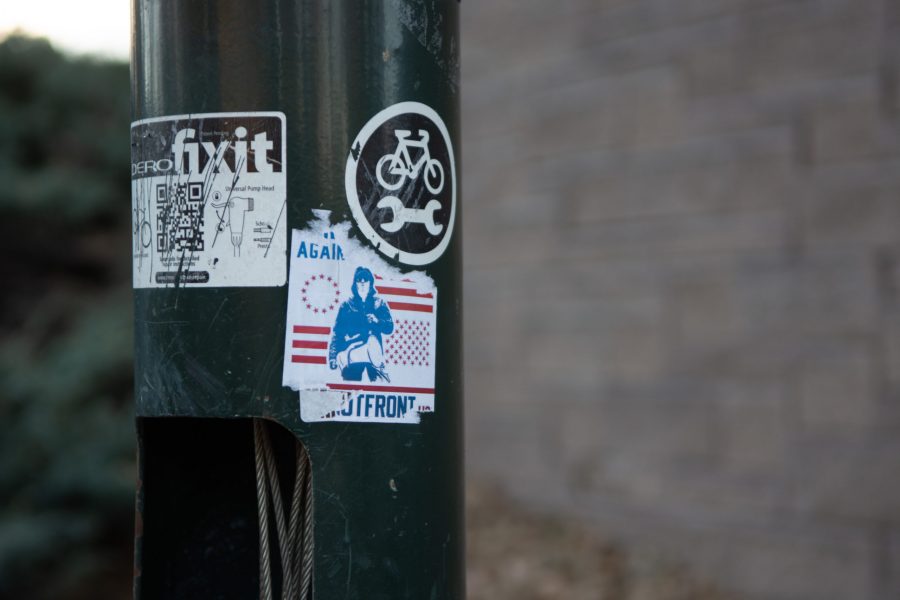 A partially scratched off Patriot Front sticker on a bike work stand next to the tunnel under Prospect Road outside the University Center for the Arts Nov. 16. The Southern Poverty Law Center calls Patriot Front a “white nationalist hate group.” (Matt Tackett | The Collegian)

If you spend some time walking around campus, one of the things you’ll notice is the prevalence of the Colorado State University Principles of Community. The five pillars of our community are everywhere: on T-shirts, wall plaques, stickers, signs and more. The principles of integrity, service, respect, social justice and inclusion permeate the school’s environment and make clear that CSU’s community is an accepting one.

Given how much effort the University puts into being inclusive, it’s jarring to see stickers from white nationalist groups just a couple blocks off campus.

Walking down Laurel Street, I found a number of stickers from Patriot Front, an organization the Southern Poverty Law Center defines as a “white nationalist hate group.” The group proclaims that American democracy has failed due to America’s multicultural nature and that America belongs to European-Americans only.

The stickers illustrate an increasingly important truth in the post-Trump era: the far-right is no longer trying to hide.”

Despite how outlandish their politics are, their stickers are rather subtle. They’re only a couple of inches big and are plastered on street lamps, traffic signs and trash cans. If you weren’t looking for them, chances are you wouldn’t even notice them — and that’s exactly the point.

Patriot Front, and most right-leaning hate groups, do a good job of slyly marketing their hateful ideologies through subtle mainstream facades. These stickers capitalize on mainstream conservative ideals and imagery. Every sticker was red, white and blue, had Betsy Ross flags and featured slogans that seem like a slightly-farther-right brand of American conservatism: “Long live America,” “Keep America American,” “America First,” etc.

To an untrained eye, these seem like palatable Donald Trumpian ideologies. A little far right, sure, but not outright hateful. That’s exactly how the alt-right wants to appear. They cloak their hate behind a mask of patriotism, self-determination and Americana that can be digested and accepted by the public — even in a left-leaning environment like Fort Collins.

The stickers illustrate an increasingly important truth in the post-Trump era: the far-right is no longer trying to hide.

While before, Nazis, racists and fascists were mostly confined to prison gangs, tiny underground groups and small online message boards, they have recently been emboldened by our national politics. The attempt to subvert democracy on Jan. 6, the massive far-right protest in Charlottesville, Virginia, and the constant support they received from the former president have only grown the power of the far-right. They have support in the halls of Congress, in the media and increasingly among the public. Their tactics are working.

These stickers demonstrate the pivot the far-right is taking after their growth in numbers. They’re no longer sticking to small pockets of the internet — they’re going public. While they aren’t plastering stickers all over Fort Collins that scream “Fascist America now,” they’re not hiding like they used to. They’re trying to push the Overton Window of Political Possibility to the far right, even in a liberal-leaning region like Larimer County.

We should all take note of the politics of the people and the world around us and the changes that occur in those politics every day.”

Think back to fall 2019, when Charlie Kirk and Donald Trump Jr. came to campus. While the event brought classic conservatives in tow, it also brought out the neo-fascists. The Proud Boys, who describe themselves as “Western chauvinists,” stood outside and antagonized counter-protestors.

They shouted hateful slogans and tried their hardest to start fights outside the event in what was one of the first public appearances of neo-fascism in Fort Collins. In short, they felt emboldened to come out of the woodwork and proudly display their hate.

I’m not saying Fort Collins is suddenly chock-full of neo-fascists hellbent on destroying the classic American way of life or that every conservative is proudly converting to fascist ideologies. What I am saying is the conservative-to-fascist pipeline exists, and these stickers demonstrate the increasing prevalence of that pipeline.

The stickers show that we all have to be conscious of our surroundings. We should all take note of the politics of the people and the world around us and the changes that occur in those politics every day. We should pay attention to the increasing presence of hatred in the United States, and when confronted with these metaphorical stickers, we should rip them down.