Cooke: We can all celebrate FoCo’s renewable electricity transition 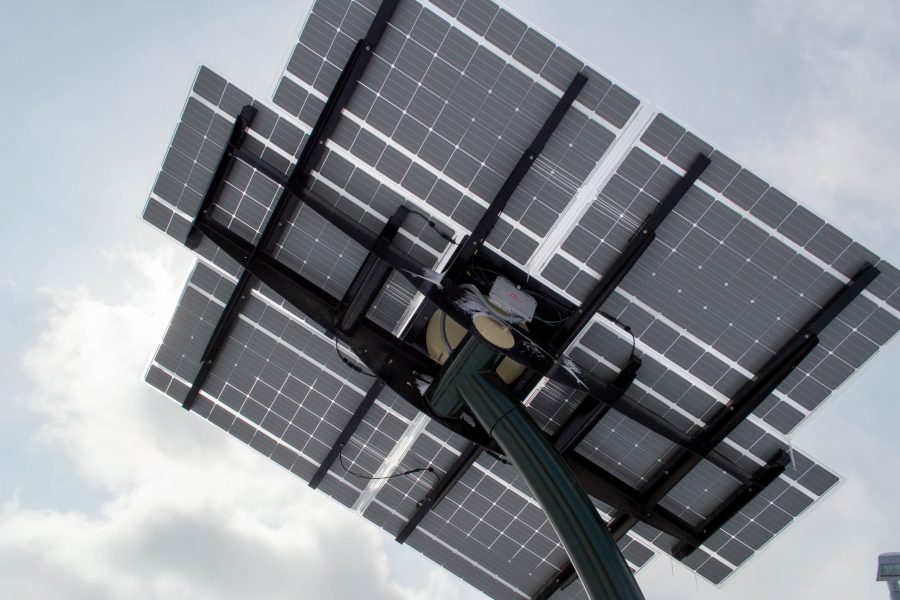 Colorado State University continues to improve their commitment to sustainability by implementing solar panels all across campus to help reduce their emissions of greenhouse gases. (Laurel Sickels | Collegian)

Like several cities across the country, Fort Collins is committed to achieving 100% renewable electricity in the coming years. This commitment ultimately determines Colorado State University’s own goals, since the University gets about 85% of its electricity from the City, according to CSU’s campus energy coordinator Stacey Baumgarn.

Rather than working on this behind the scenes where many residents can’t even tell it’s happening, Fort Collins should emphasize its renewable electricity transition as an important part of the City’s character. Given the urgency of the climate crisis, our decision to do away with fossil fuels should be a point of pride for everyone who calls this place home.

Decarbonizing our electricity is a huge part of our overall response to climate change, and it’s happening right now.”

“Sustainability is an obligation to the future,” Baumgarn said. It’s a deliberate choice in the present to do things in a way that does not jeopardize opportunities for future generations. Making sustainable choices now demonstrates our loyalty and consideration to those who will come after us.

Isn’t that something you want to shout from the rooftops? Doesn’t it sound like something we would all be excited and proud to practice? Well, it’s certainly happening, but wouldn’t it be nice to explicitly celebrate it?

Perhaps the City’s renewable electricity transition is difficult to celebrate right now because it’s not exactly visible to most people. The transition so far seems to only be happening in board meetings and actual power plants. Talking with Baumgarn, I gathered this process is just as bureaucratic and clunky as it is historically significant.

Fort Collins receives electricity from the electric utility company Platte River Power Authority. The authority, which is aiming for 100% noncarbon energy by 2030, is joint-owned by its member cities and town, which include Fort Collins, Estes Park, Longmont and Loveland.

The authority being publicly owned is important, Baumgarn said. “No one’s competing — we’re all working towards a shared goal,” he said.

CSU cooperates with Fort Collins, the City cooperates with the other members of the authority and they all share the goal of achieving renewable electricity generation within the decade.

Easily accessible artifacts — maybe even working demonstrations — of solar or wind technology could foster wonder and pride in all who see it, especially in young engineers of the future.”

This is great, and according to Baumgarn, “Loads of conversations and collaborations are happening.” But all of this still feels like it’s happening elsewhere. Unless you work at a power plant or in the authority’s office, how can you notice and take pride in this transition?

A suggestion: Celebrate whenever we hit certain benchmarks or after a year of increased renewable electricity capacity. Imagine a festival or a half-day of classes when we all dedicate some time outside for a collective, “Hey! We’re doing it!”

Imagine if Fort Collins built public exhibits of renewable infrastructure in Old Town or parks across the City. Easily accessible artifacts — maybe even working demonstrations — of solar or wind technology could foster wonder and pride in all who see it, especially in young engineers of the future.

According to Baumgarn, CSU currently has at least 20 new solar arrays under construction that will be installed on campus sometime in the near future. We could have the CSU Marching Band play when each one is installed, CAM the Ram breaking it down to the beat while President Joyce McConnell freestyles about renewable energy.

Fantasies aside, we should be ecstatic and proud of this region’s renewable transition because of how historically significant this transition is. Electricity generation accounts for 25% of greenhouse gas emissions, according to 2019 data from the United States Environmental Protection Agency. Decarbonizing our electricity is a huge part of our overall response to climate change, and it’s happening right now.

Fort Collins deserves to feel special about its commitment to renewable electricity. Such a commitment demonstrates that our community cares deeply about its own future as well as that of the planet as a whole. Moreover, to echo Baumgarn, it reflects a tendency to embrace cooperation and collaboration over competition.

“Sustainability is an obligation to the future,” Baumgarn said. Learning to celebrate our City’s obligation to its future would give us all more reasons to smile and reinforce our collective ties to this jewel of a place.