Tusinski: It’s time to open up about mental health 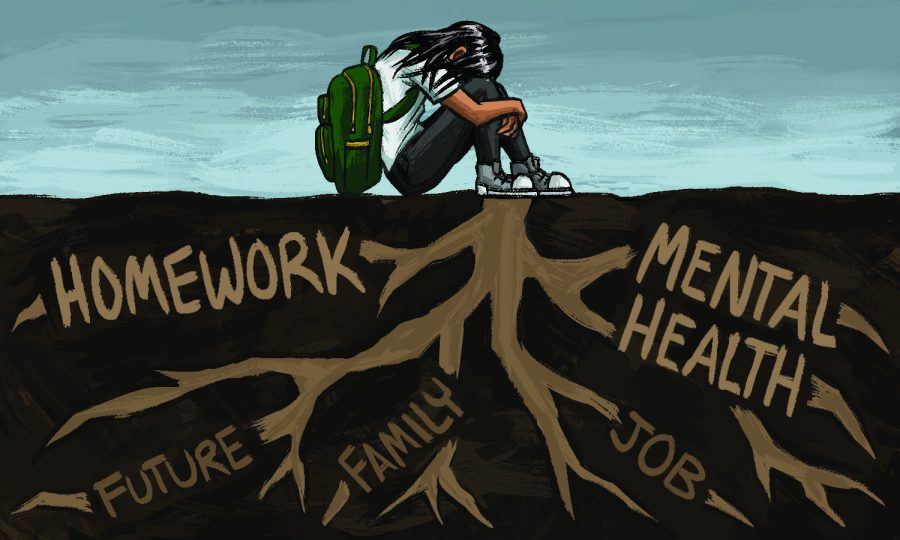 Hi, my name is Dylan Tusinski. I’m currently a junior at Colorado State University, and I have been diagnosed with depression and paranoia. I was first diagnosed with depression when I was seven years old, in second grade, and I was diagnosed with paranoia just last year. My mental illnesses affect me pretty heavily, but through it all, I’ve survived. I’m not ashamed of my mental health, even if it’s been poor. It’s part of me, and it’s made me a stronger person.

See? It’s not that hard to be open about your mental health, even if it’s not a sunny picture.

Mental illness cannot and should not be used as a crutch to excuse your actions but should be used as a baseline to explain them.”

Stigma around mental health is an unfortunately pervasive issue. Studies have shown that people keep their distance from those who don’t have perfect mental health. Even medical professionals share this same stigma, which truly shows the depth of the issue. It runs so deep that even those with poor mental health will sometimes place the stigma on themselves.

So, as someone who’s admittedly mentally ill, I want to end that stigma. I’ve found that in my personal relationships, one of the best ways of doing so is being upfront about it. Being open with my friends and family about my emotions, even when they’re influenced by my mental illness, has cultivated deeper kindness and compassion.

You should be open about your mental health so as to deepen your friends’ understanding of your emotions. Chances are they’ll be more caring and kind.”

Take, for example, a situation I had with a friend: She and I would hang out pretty frequently, almost on a nightly basis. After some time, though, I fell into a depressive episode and couldn’t muster up the energy to leave my bed, let alone my house.

She texted me after a few days and was understandably concerned that I’d gotten bored of her, suddenly didn’t like her for some reason, had found better friends to hang out with or was otherwise uninterested in furthering our friendship.

Rather than lying and saying I was busy or that classes had gotten hectic, I told the truth and said that I had been really depressed. I told her that some of the things she had done and said contributed to my emotions, but I stressed that my actions were a reflection of myself, not of her.

It went really well. She understood immediately and began changing her actions. She stopped saying the things that would trigger my depression, she stopped specific actions that would make me noticeably sadder and she ended up being much more compassionate.

At the same time, she helped me understand how my actions, even if spurred by mental illness, affected her — how my social withdrawal, my general sadness and some of the things I said in my depression-clouded mindset had hurt and impacted her. While she used the opportunity to grow and strengthen our friendship, I did the same. As a result, we became much better friends.

It was a great microcosm of things that I’ve since recommended to all of my friends who are also mentally ill. You should be open about your mental health so as to deepen your friends’ understanding of your emotions. Chances are they’ll be more caring and kind. They’ll understand that your judgement is clouded and that your mind is full of mixed messages that may not accurately reflect reality.

That being said, the work doesn’t end at being open about your mental health. You can’t just say, “I’m mentally ill!” to your friends and expect them to immediately understand and accept everything you do and say. Mental illness cannot and should not be used as a crutch to excuse your actions but should be used as a baseline to explain them. You have to work to be better, and opening up is a great place to start.

If nothing else, I wanted to write this article to let you know that you’re not alone — that no matter what you’re dealing with, no matter how serious or how trivial, there is someone there for you. … Things do get better.”

I also want to note that being open with your peers might be good for some, but it isn’t good for everyone. There are plenty of situations and circumstances that aren’t the arena for openness about mental health. But what’s helped me may help someone else out there, which is why I wanted to write this article.

Lastly, I feel it’s important to stress that there’s no cure to mental illness. Being open about your mental health won’t magically cure your mental illness. There is serious work to be done, whether through therapy, medication or any other form of treatment. Going through the rigmarole that is mental health treatment, you may still find yourself struggling — that is OK.

If nothing else, I wanted to write this article to let you know that you’re not alone — that no matter what you’re dealing with, no matter how serious or how trivial, there is someone there for you; that mental illness doesn’t make you less than anyone else; that it is an obstacle that can be overcome; that things do get better.