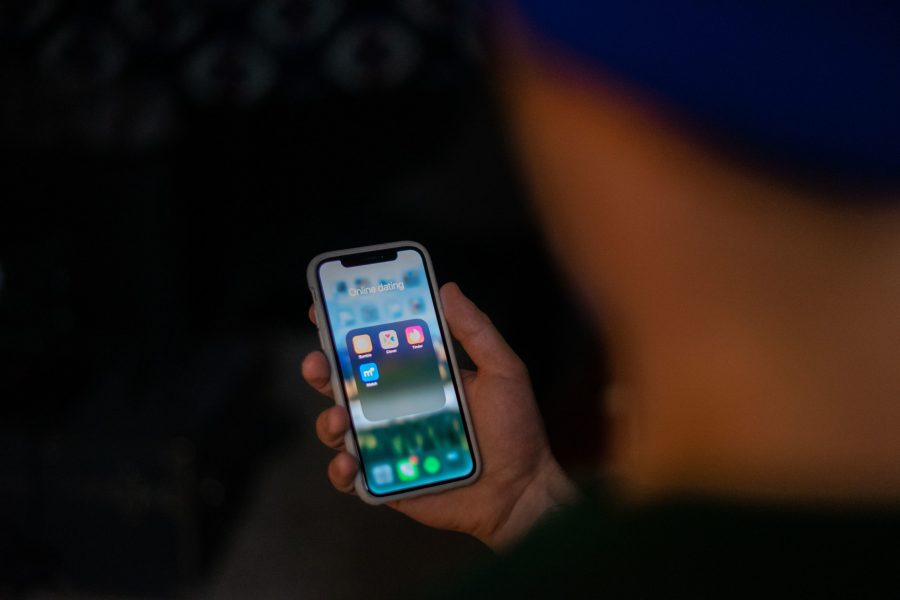 Dating apps have become a popular alternative to meeting people in person. Users upload an online profile of themselves, and if matched with another person, they can start chatting through the app. Online dating services have been around for 20 years, but have recently become more common Feb. 23, 2020. (Skyler Pradhan | Collegian)

College is a time for dating. Some people spend their academic career dating casually or hooking up, while others meet their future spouse and begin settling down.

While navigating the world of dating, younger students may encounter potential partners significantly older than themselves, and it’s important to be aware of red flags and potentially abusive behavior as a result of the power dynamic.

Any relationship occurring between two of age and consenting adults stands the test of legality, but age-discrepant relationships are a minefield for manipulation and deception.”

Married heterosexual couples with an age difference of 10 years or more make up an estimated 8.5% of the total United States married population, according to a U.S. Census Bureau survey from 1999. While data on heterosexual couples in age-gap relationships today is limited, one might expect that percentage to have gone up in recent years.

U.S. Census Bureau data from 2018 suggests that around 60% of adults aged 35 to 44 own a home. Approximately 77% of those in the same age group have a job, according to data published by Statista earlier this year. Dating someone of this caliber — who owns a home, or several, and has an established career — can seem alluring when you’re by all means a novice in the game of life, but is it really emotionally economical?

Any relationship occurring between two of age and consenting adults stands the test of legality, but age-discrepant relationships are a minefield for manipulation and deception.

When you’re in your late teens or early twenties, you may feel like you know everything there is to know about life; maybe you have a good amount of dating experience already.

Often in these kinds of situations, however, the relationship will revolve around a dynamic in which the older partner takes the lead. Why is this, though? An older partner, in most cases, simply has more dating experience and naturally falls into the role of shot caller.

This imbalance of experience can make for a hotbed of lying, gaslighting and other forms of manipulation. Someone lacking experience in the dating game is more susceptible to the deception of a duplicitous partner.

When you have years of dating experience under your belt, you probably know how to spot red flags. You recognize a partnership should be built on honesty and communication.

Inexperienced daters might not spot these red flags and are less likely to pick up on toxic behavior. A partner that is considerably older than you could see this as a weakness and take advantage of this.

That’s not to say that all age-discrepant relationships are marred with deceit, though. This kind of manipulation can happen in any relationship in which one partner has substantially less experience, regardless of the age difference.

The circumstances simply make it more likely for such a situation to occur when an older — and particularly unsavory — partner has the upper hand.

Dating someone much older or younger than yourself also becomes a nonissue once you enter later stages in life.

The difference, however, is that at that point in life — regardless of the age disparity — odds are you’re at a similar life stage as your partner. You likely both have your own place and a career established.

When you’re just entering college and dating someone who is at a radically different stage of their life, that difference can feel astronomical.

Tom Bender, a licensed professional counselor of 25 years with his own practice in Paonia, Colorado, who deals with couples and individuals, agrees that the dynamic of an age-discrepant relationship wholly depends on the ages of those involved.

Statistically, relationships with a large age gap don’t have an optimistic future, either.

A study published in the Journal of Population Economics found that overall, married couples with a smaller age gap reported more marital satisfaction than those with a larger gap. Among those sampled, couples with an age gap of one to three years generally reported the most happiness within their marriage.

If you’re seeking a fulfilling long-term relationship based on this data, look for someone no more than three years older than yourself, and regardless of your partner’s age, watch out for red flags.