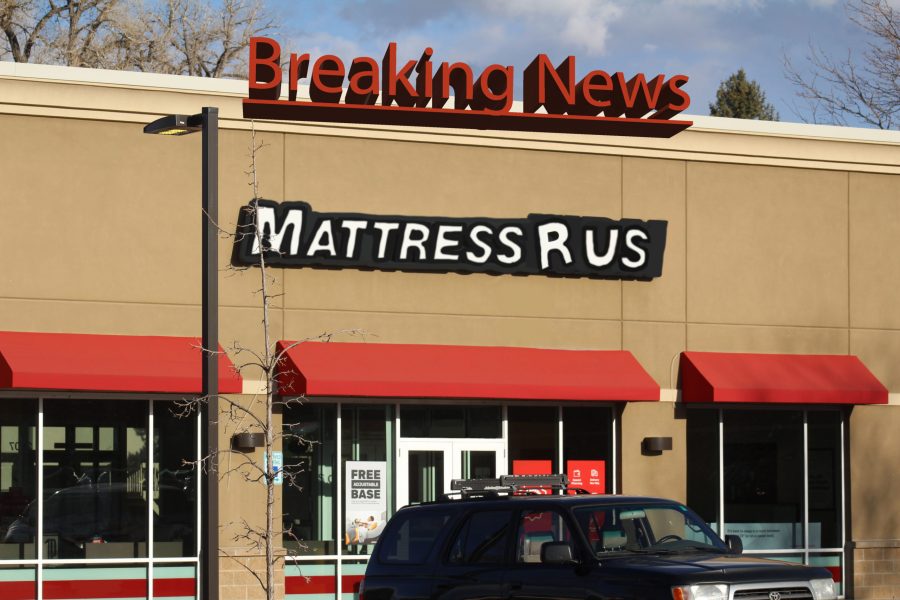 For the past several weeks, The Unprecedented Times investigated dramatic drug busts and cover-ups connected to Northern Colorado’s endless proliferation of mattress stores. Now, thanks to the contribution of some unlikely allies, we’ve cracked the cocaine case wide open.

Earlier this week, The Unprecedented Times reporters met outside at awkwardly appropriate social distances. Per Centers for Disease Control and Prevention guidelines, we maintained enough distance to fit two Dr. Anthony Faucis between us. When we discussed what evidence we had on the case, a gaggle of geese chortled past.

Rather than stalk forward and stare us down with those cold dark eyes like normal, the geese jerked their heads side to side and burst forward in a squawking flash of feathers. Assuming the geese were just having a rough day, we tried to get back to our work.

But one reporter, Rue “Blue” Maroon, convinced us that something was up.

“I’m a regular goose bully target,” she said. “These birds aren’t itching for a fight. They’re itching for something else.”

Another reporter, Skeeter Yeet, alerted us to the birds’ white-ish poop. Yeet was certain the geese had recently ingested powdered cocaine — and lots of it. When we asked why he was so sure, Yeet said he, like Maroon, is frequently harassed by geese.

“Gotta fight back somehow,” Yeet said with his eyes on the ground. Before we could ask what he meant, the geese took flight, and suddenly we had a trail.

We followed the geese as they flew south along the I-25 corridor. The birds stopped at several mattress stores, foraging for cocaine in discarded mattresses until they were shooed off. After a Longmont detour, the flock of drug fiends followed a delivery truck marked with Mattress “R” Us insignia.

We followed our coked-out eyes in the sky to the outskirts of Denver. The mattress truck pulled into a large parking lot occupied by more trucks like it, conspicuous black vans and police cars. We confirmed the presence of Officer Sus McShady, the last known person to see The Unprecedented Times editor Baul Prull before he went missing.

The genius of basing these mattress stores in Northern Colorado is that they fit perfectly into a landscape with a booming human population. Everyone and their grandma needs a mattress, right?

Suddenly, there was a blur of honks, feathers and confusion. When a van opened its back doors, the geese descended upon it like addict moths to a cocaine flame. Narcotic powder blocked out the sun, and The Unprecedented Times reporters escaped.

After a literal wild goose chase, we regrouped back in Fort Collins and put all of our information together.

We don’t wish to alarm readers, but it very well might be that most, if not all, mattress warehouses between Fort Collins and Denver are actually just Walmart-sized transit stations for a quantity of drugs large enough to coat the Front Range like a winter storm.

Mattress stores get drugs from dealers in super sketchy Denver parking lots. They buy in bulk, since mattresses hold so much volume. Based on what we witnessed, they deal mainly in cocaine, but other substances make their way into the scheme as well. The geese stick to booger sugar — God knows what the rabbits get into.

Whether the drugs go directly from the vans to the mattresses, like some kind of cocaine Dr. Seuss machine, is unclear. We do know, however, that law enforcement is involved based on McShady’s presence.

The genius of basing these mattress stores in Northern Colorado is that they fit perfectly into a landscape with a booming human population. Everyone and their grandma needs a mattress, right?

With the demand in place, the warehouses hold the goods until they get distributed across the region. Based on our evidence of mutilated mattresses, it’s likely that some of the drugs are sold directly out the back of mattress stores. One of our most credible witnesses, Willy-Bob Slick, testified to the “super sus” things happening behind these stores.

But, in one last diabolical twist, it might be that U+2 is a political scheme orchestrated by drug-dealing landlords as a justification for keeping unused mattresses in vacant bedrooms. These mattresses could be absolutely dummy-thick with thousands of dollars of cocaine, heroin, marijuana and probably COVID-19 vaccines too.

We understand that the magnitude of this conspiracy might frighten our readers, but The Unprecedented Times is dedicated to bringing you the truth — even when that truth means vast drug enterprises, crooked landlords and coked-out geese.

Although we’ve exposed this dastardly scheme, The Unprecedented Times has no way of knowing what will happen to the mattress stores between Fort Collins and Denver. Perhaps the only thing we can do is warn our readers of what we’ve learned. One thing is certain: We owe our local geese a couple lines of gratitude for pointing us in the right direction.

Editor’s Note: This is a satire for April Fools’ Day. Real names and the events surrounding them may be used in fictitious/semi-fictitious ways. Those who do not read the editor’s notes are subject to being offended. This work is a piece in a larger series. Read part 1, part 2, part 3 and part 4 at collegian.com.