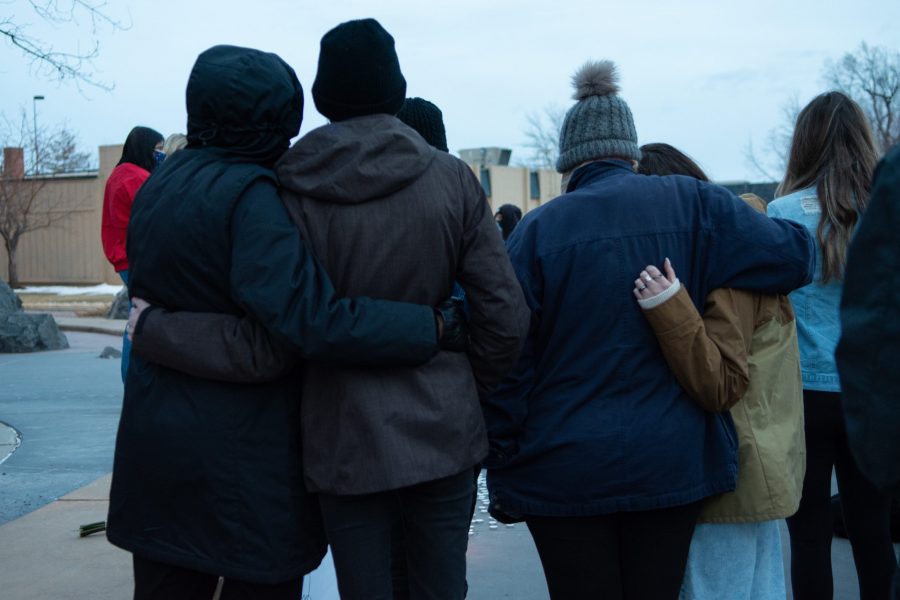 Vigil goers stand together during the moment of silence at the March 23 candlelight vigil organized to honor the victims of the March 22 Boulder King Soopers shooting. The vigil was held outside of the Larimer County Justice Center. (Matt Tackett | The Collegian)

On March 16, a shooting spree left eight dead in Atlanta; six of the victims were women of Asian descent.

Robert Aaron Long, the man charged with the murders, told investigators his ‘sex addiction’ motivated him to “take out that temptation,” according to Cherokee County sheriff’s Capt. Jay Baker.

Long explained his behavior with discussions of his addiction (although sex addiction is not acknowledged by the psychiatric community as a disorder).

Mass shootings are all too common in the United States, and the narrative about mental illness woven into the discussion about these shootings is damaging. Instead of discussing why the shooter is “crazy” or mentally ill, we should be discussing the effects of toxic masculinity within our culture.

Understandably, following a mass shooting, many people are gripped with grief and fear and look for explanations for the events. Labeling the shooter as “crazy” and mentally ill seems to quell this need for answers, but it negatively impacts people actively struggling with mental illness.

Open discussions about mental health and well-being are incredibly important to helping college students maneuver through school and enter full adulthood well-adjusted, but more severe mental illnesses are repeatedly left out of that discussion.”

Instead of immediately labeling a shooter mentally ill or “crazy,” we should examine the role toxic masculinity plays in creating their perceptions of the world and perceived “justifications” for their actions.

According to The Violence Project, as reported by National Public Radio, 98% of mass shootings are committed by men.

Some people argue that men are biologically predisposed to aggression, which is perpetuated by “boys will be boys” culture, which socializes young boys to believe that their reckless or aggressive behaviors are just part of their nature. This same behavior is criticized when displayed by young girls and “corrected” early on.

Toxic masculinity in the U.S. places importance on more stereotypically masculine behaviors and shames those who appear or act more effeminate. Toxic masculinity can be seen in phrases like “boys don’t cry” or “man up,” which teach young boys and men to bottle up their emotions.

This internalization of masculinity creates a vicious cycle where men feel emasculated and act out in a hyper-masculine way (such as committing a mass shooting to show aggression) to regain a sense of control and then shame other men into that same conformity.

Mass shootings are an extreme example of this, to be clear, but that the need to reach impossible, hyper-masculine standards — without reaching out for help because that would be too feminine — creates a space for insecurity and hostility.

This does not justify the actions of those who commit mass shootings, but it is a more central and grounded idea than labeling them as mentally ill and moving on.

In fall 2018, 41.2% of college students met with a counselor, therapist or psychologist via select providers, according to Statista.

Open discussions about mental health and well-being are incredibly important to helping college students maneuver through school and enter full adulthood well-adjusted, but more severe mental illnesses are repeatedly left out of that discussion.

Instead, we should examine the role that toxic masculinity plays in creating this emotional instability and not just blame it on mental illness.

Discussing mental illness in nonviolent contexts is crucial in the fight to destigmatize these very real and common disorders faced by everyday people.