Eckburg: Baby boomers and millennials agree on one thing: weed 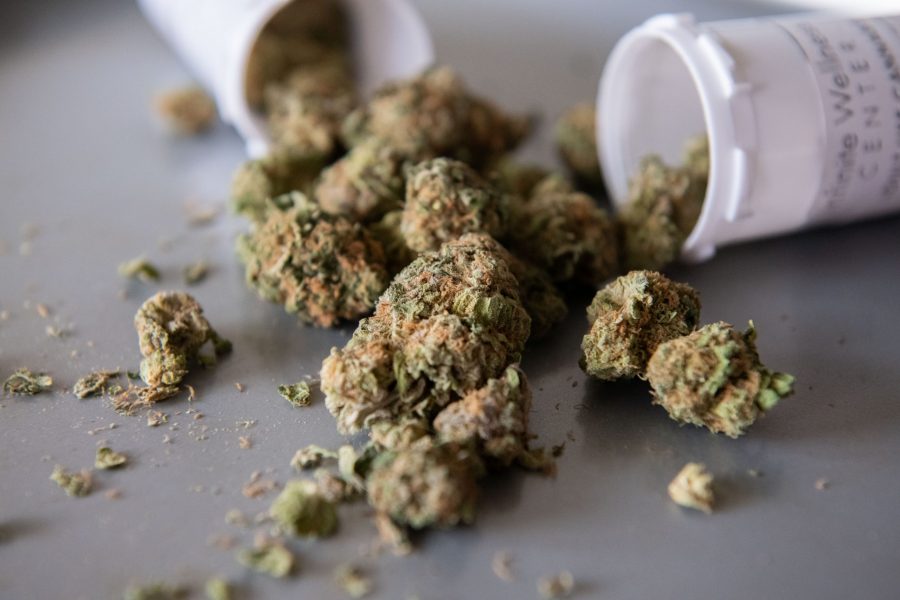 The National Institute of Drug Abuse has given a $3.2 million grant to researchers from Colorado State University and the University of Tennessee, Knoxville to test a text-delivered counseling program for young adults with cannabis use disorder. CUD is a diagnosis given for the continued use of cannabis despite clinically significant impairment. (Photo Illustration by Colin Shepherd | The Collegian)

The marijuana industry in the United States is experiencing an extraordinary period of growth.

In the U.S. in 2018, the legal marijuana industry was worth $10.4 billion, said Beau Whitney, vice president and senior economist at New Frontier Data — which specializes in examining data for the global cannabis industry — in an interview with the Associated Press.

Investors are learning more about the marijuana industry, and nearly two-thirds of U.S. states have legalized medical marijuana in some way or another. The industry is booming, and that growth is not showing signs of slowing anytime soon.

As the industry grows, it’s important to recognize the generational differences in how people view marijuana, both medically and recreationally, and the shift in tolerance that is occurring across the nation.

With rising accessibility and technological advancements throughout the industry, marijuana is becoming normalized and accepted across all age groups.”

Millennials are crucial in the shift that normalizes use of both medical and recreational marijuana. The influx of new information about marijuana’s effects and uses has led older generations, like baby boomers, made up of people born between 1946 and 1964, to become more progressive with their views, slowly untangling the racist ideology associated with the plant.

After the United States repealed Prohibition in the mid 1930s, states started regulating marijuana, and the Marihuana Tax Act passed in 1937. This act was essentially the United States’ first step in criminalizing marijuana across the nation and was largely tied to racism against Black and Mexican communities, who used marijuana more frequently during that time.

At the time, marijuana was falsely linked to rising crime rates and violence, and fears about the drug swept the country.

The boomer generation grew up surrounded by anti-marijuana propaganda as well as the war on drugs in the 1970s, meaning uncertainty about the effects of the drug followed them through their lives.

Now, boomers are more likely to use marijuana for only medicinal purposes, helping relieve chronic pain and arthritis, and millennials report using it recreationally as well as medically.

This shift in tolerance is likely due to the change in the way marijuana is discussed.

Boomers were born into a U.S. that was largely intolerant of marijuana and lived through the surge in popularity that occurred in the 1960s and ‘70s.

As the country moves to decriminalize marijuana, a shift in attitudes is ever-present among boomers.

Decriminalization and legalization increases the overall availability of marijuana along with more accessible information about its effects and uses. As older people get prescriptions for marijuana to help them with chronic pain, it may further the trust they have in the positive aspects of cannabis use.

Millennials — people born between 1981 and 1996 — and Generation Z did not grow up with the same societal stigmas that boomers had about marijuana.

By the time the youngest millennials were born, California already legalized medical marijuana.

Smoking flower — the plant itself — still remains the most common way of consuming marijuana but is declining due to the popularization of cannabis vape products.

With rising accessibility and technological advancements throughout the industry, marijuana is becoming normalized and accepted across all age groups.

The global cannabis industry is expected to reach “97.35 billion (dollars) by the end of 2026,” according to Fortune Business Insights.

Millennials are pioneers in legalizing recreational marijuana. According to a Pew Research Center study, 78% of millennial democrats believe marijuana should be fully legalized. 71% of millennial republicans also support this.

One of the other important motives that millennials have for fully legalizing marijuana is the broader social impact that it will bring.

According to the American Civil Liberties Union, despite Black and white communities using recreational cannabis at similar rates, Black people are 3.64 times more likely to be arrested for possession of marijuana. Laws that were born out of racism continue to target and impact people of color and their communities.

According to the National Association for the Advancement of Colored People, “Despite making up close to 5% of the global population, the U.S. has nearly 25% of the world’s prison population.” African Americans have an incarceration rate of a little over five times more than their white counterparts.

As the marijuana industry booms, the baby boomer generation and millennials have more in common than they think, and they possess the unique ability to present different views on the effects and uses of marijuana both medicinally and recreationally. Although they have different motivations for advocating for legalization, both generations are representative of a tolerance shift throughout the nation.

Ideas about marijuana are shifting as knowledge and technology advance, making it more accessible. The generational differences between boomers and millennials are vast, but surprisingly, if there’s one thing they can agree on, it’s weed.