CAM the Ram advocates for geese as mayor of Uncanny Valley 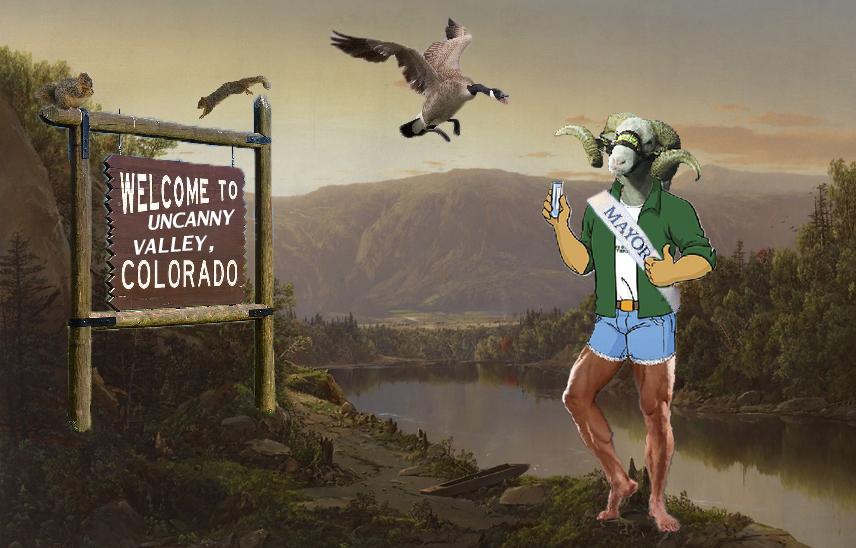 Students on Colorado State University’s campus are noticing that their beloved CAM the Ram has been looking a bit different lately.

While in past semesters CAM appeared in Ram form, this semester CAM has been showing up on signs, stickers and newspaper ads encouraging students to follow COVID-19 safety measures. But the community has questions. What happened to football? Why did he spontaneously start walking on two legs, and why does he suddenly look like a modern and more studious version of John Travolta?

“His fashion seems to merge the realms of both ram and human being — a look some professionals in the field are calling ‘furry fashion,’” apparel and merchandising major Jennifer Olivia-Newton said.

Since CAM had the year off using his work as a mascot to act as the stabilizing force in freshman students’ sanity due to the COVID-19 panopticon, he’s hooved up to answer an important call from his other furry friends (the ones with extra legs).

Since fall 2020, CAM has been serving as interim mayor of Uncanny Valley, Colorado, after the previous mayor, Marvin Mandrake, perished during a terrible encounter with a lawnmower.

“I wanted to use my unique position as a member of the CSU community and the animal community to act as a bridge between the two,” CAM said, dabbing his snout with a tissue after completing his weekly COVID-19 saliva screening.

CAM noted that he took on walking on two legs and wearing human clothes after a suggestion from the Coalition of Minotaurs, Sirens and Centaurs.

“The coalition thought that by making my chiseled pecs and triceps burst out from beneath a CSU T-shirt, I could gain the attention of the college demographic,” CAM said. “I believe ‘pulling hot college babes’ is the technical term for it.”

Students have varying reactions to this change, ranging from inexplicable attraction to a profound, visceral feeling of dread ― both of which influence their dreams at night.

“The most important thing to remember is that the pit that grows in your stomach when you see the new CAM is completely normal,” advised CSU Health and Medical Center psychiatrist Thomas de Nile. “I know this for a fact because I feel it too, and I just can’t afford to descend into insanity with the rest of you.”

The coalition thought that by making my chiseled pecs and triceps burst out from beneath a CSU T-shirt, I could gain the attention of the college demographic.” -CAM the Ram, interim mayor of Uncanny Valley, Colorado

One thing students can look forward to are the new political initiatives CAM is spearhorning.

“I’ve been negotiating with the campus geese, and they’ve agreed to do their business away from the sidewalks if CSU can successfully lobby the City of Denver to stop feeding them to homeless people,” CAM said. “In addition, I’m patching things up between CSU Facilities Management and the squirrels, who feel that their cleanup efforts oftentimes go unnoticed by their superiors.”

CAM has also used his time off to actually get an education, which is something he didn’t know CSU students did because he only ever sees them partying.

“I didn’t realize that human beings could actually walk in straight lines until I saw them on weekdays,” CAM said, polishing his hooves.

Despite the clear positive political benefits of his new position, like visiting dads, CAM prefers the tailgates to the classroom.

“Once the global poltergeist has passed, you can count on seeing me back on the field — or at least on the television,” CAM said.

Editor’s Note: This is a satire for our April Fools’ Day edition. Real names and the events surrounding them may be used in fictitious/semi-fictitious ways. Those who do not read the editor’s notes are subject to being offended.

The Unprecedented Times reporter A bee-van Der Graph can be reached at letters@collegian.com or Twitter @abbym_vg.