Blouch: If you drink alcohol, don’t judge the stoners 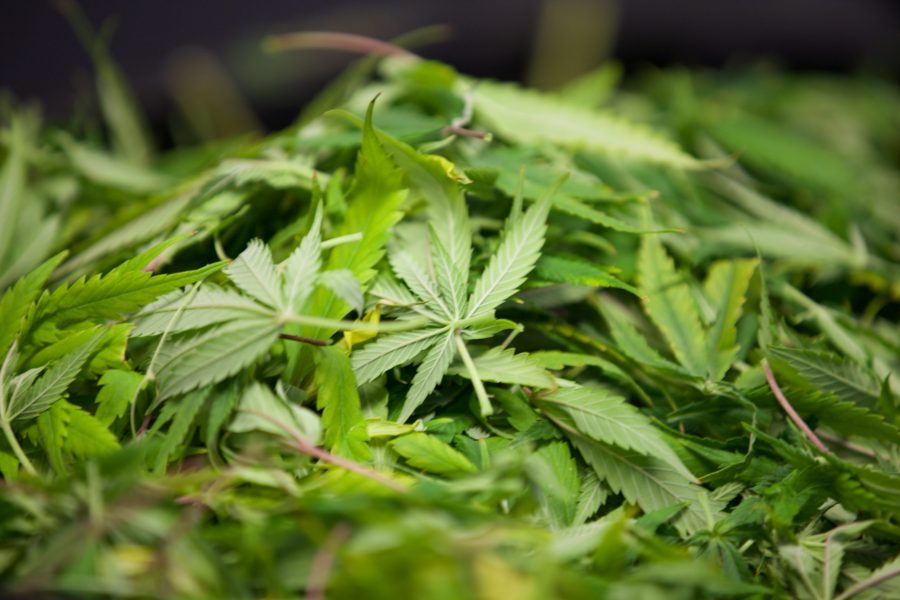 Cannabis leaves in bins in Organic Alternatives’ grow facility on Apr. 7. All plant material that is not sold will grinded and mixed so that it is unidentifiable once it is finally disposed of. (Ryan Schmidt | The Collegian)

In 2012, Colorado became one of the first states to legalize marijuana for recreation, alongside Washington. Being born and raised in Colorado, I am familiar with the ever-present, evolving dialogue around the drug.

While many people associate Colorado with marijuana — and we have garnered a reputation for ourselves as “freethinking stoners” — it’s important to recognize that Colorado’s weed culture wasn’t always this way. It took years for Amendment 64 to pass, with people on either side of the debate in what seemed like a never-ending tug-of-war battle.

The stigma around marijuana didn’t go away once it was legalized, and the drug still has a lot of negative connotations. When I was in middle school, our drug education program centered around abstinence, such as the Drug Abuse Resistance Education program, though it was largely ineffective at preventing substance use.

People still use marijuana for its healing properties today.”

The fear instilled from this misinformed education created a distorted view of what marijuana actually is. This view becomes hypocritical when it is put alongside alcohol, which is widely socially accepted. Many people partake in both substances — especially college students.

A recent study showed that around four out five college students consume alcohol to some extent. According to a national study, “In 2018, 43% of full-time college students aged 19-22 reported using marijuana at least once in the prior 12 months.”

Yet there is still an unfair stigma against weed when compared to alcohol. Some women have opened up about their experience with said hypocrisy during motherhood.

“Being judged for doing something nontoxic and totally organic, enjoying a God-given plant, by moms who suck back two bottles of Chardonnay like sports drinks feels like sh*t,” a Tennessee mom said.

Yet there is no hard evidence to suggest that anyone has died from a “weed overdose.” Verywell Mind said, “There have been a few isolated case reports where marijuana has been implicated in people’s death. However, a clear causal relationship has not been established.”

Meanwhile, deaths from alcohol use account for a little over 95,000 deaths in the United States each year, according to the Centers for Disease Control and Prevention.

Blindly stigmatizing weed also ignores the history of marijuana. Marijuana use likely dates back to Asia around 500 BC, where ancient cultures used the plant as herbal medicine — not to get high. During the 19th and 20th centuries, people in the U.S largely used cannabis as a patent medicine.

Stigmatizing marijuana while simultaneously ignoring the risk of alcohol, an objectively more harmful substance, is hypocritical.”

People still use marijuana for its healing properties today. WebMD explains how people use medical marijuana for pain management of health conditions such as Alzheimer’s disease, cancer, Crohn’s disease, multiple sclerosis and many others.

Meanwhile, alcohol consumption poses a serious threat to the body. Consistent alcohol use is linked to liver damage, pancreatitis, infertility and cancer among other serious health concerns.

This isn’t even mentioning the risks an unhealthy relationship with alcohol can do to the interpersonal lives of an individual. Alcohol abuse within a family can cause long-lasting troubles within it. An article published by pubmed.gov explained that it is linked to “high levels of interpersonal conflict, domestic violence, parental inadequacy, child abuse and negligence, financial and legal difficulties” and other dangers.

In a study published by the National Center for Biotechnology Information, alcohol consumption among college students was negatively associated with motivation to achieve well in academics.

While marijuana consumption is also linked to worsening academic performance, the risk is not as high given that alcohol is more addictive than marijuana. A 1998 report shows alcohol’s potential for addiction as way more than marijuana.

Stigmatizing marijuana while simultaneously ignoring the risk of alcohol, an objectively more harmful substance, is hypocritical. Not only does it undermine the risks of alcohol, but it perpetuates a narrative that gatekeeps an effective medicine that treats a number of different conditions.

With that being said, marijuana is not the perfect plant. Like any drug, there are risks, and overconsumption is typically not a good thing, all else equal. An unbiased, comprehensive education is necessary for people to understand both the risks and the benefits this drug may present should someone choose to consume.