Holitza: Mass shootings are a part of our return to ‘normal’ 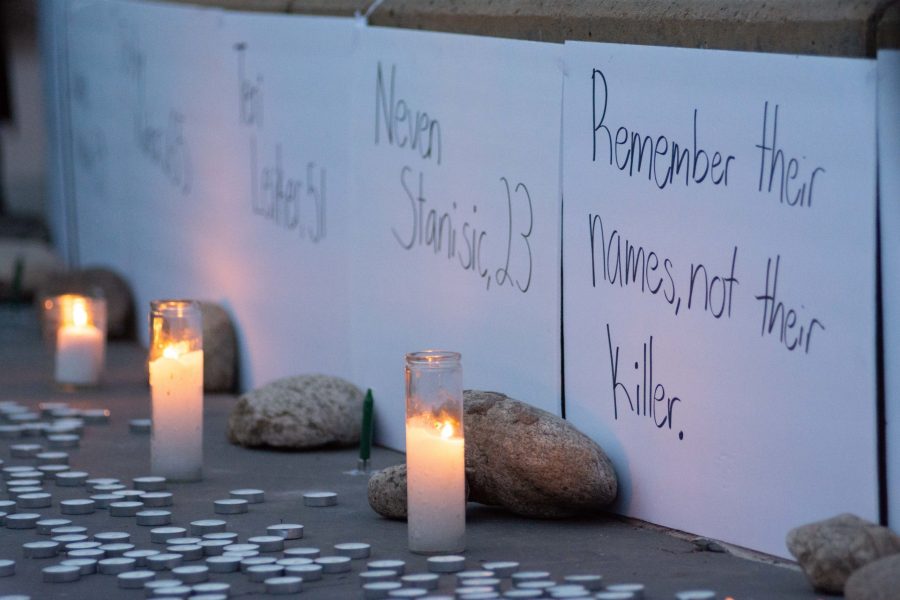 Signs listing the names and ages of the victims of the March 22 Boulder King Soopers shooting are placed for a candlelight vigil outside of the Larimer County Justice Center March 23. (Matt Tackett | The Collegian)

In an honestly enraging statement from the Colorado State Shooting Association, they laid out a perfect example of the repetitive and apathetic tone often taken by so-called Second Amendment advocates.

While thoughts and prayers are a respectful public response to such tragedies as the 10 lives lost in Boulder, Colorado, or the eight lives lost in Georgia, when all lawmakers can muster is thoughts and prayers, it comes as little respite for these unfortunately all too common tragedies. Action is necessary, and change will not come without lawmakers putting aside their petty quarrels and doing something because doing nothing is not working.

Our guns have changed, shouldn’t our gun laws? pic.twitter.com/9wQ06O9eMP

In 2016, States United launched a campaign that blames the evolution of guns for the rise in mass shootings. The argument presented is one that has been voiced for years. When the Second Amendment was originally drafted, it was obviously during a period in which the only guns Americans could gain access to could fire one shot before requiring several minutes to reload.

The point of the amendment, for self-protection against a tyrannical government, has little merit today. The 2021 election transition period demonstrated that even in the face of a power-hungry politician like former President Donald Trump, our electoral system worked, displaying that we no longer have the need for such extreme measures of self-protection.

The Second Amendment seems to be a catch-all argument for many pro-gun advocates. One of the most common criticisms of gun control is that criminals will find a way to gain possession of guns regardless. The Boulder shooter legally purchased the gun that he used against several people — this came just 10 days after a judge blocked the counties’ two-year standing assault weapon and large capacity magazine ban. To many, this demonstrates that the problems stem from a systemic inability to restrict obviously extreme freedoms.

No individual person should be capable of committing such acts of violence, even if they possess the intent. Making it more difficult to get assault weapons may have direct impact on the sheer number of violent events that continue to occur, and without attempting them, we will not know. What is clear is that inaction isn’t working.

As a community, we mourn together, remember together and we will get through this together. #BoulderStrong pic.twitter.com/aU1kJvRLiX

This shooting drove home sentiments that are shared by many Coloradans and our unfortunate history surrounding gun violence. Many of us vividly remember nine years ago when the Aurora theater shooting occurred, during which 12 individuals were killed and nearly 70 others injured.

Nearly 22 years ago, shooters killed 12 students and a teacher at Columbine High School. People in Colorado have seen and mourned mass shootings far too often over the past nearly two decades — tragedies that we cannot guarantee would have occurred had the rifles that these individuals carried been far more difficult to acquire.

The problem remains that kind words and condolences continue to be the only response to these frequent mass murders. Diversions and dodging continue to occur like clockwork after each and every shooting. It is infuriating to say the least, and the aftermath of these horrific events continues to be predictable and ineffective. After a year with little to no mass shootings due to the pandemic, it is now apparent that nothing has changed.

The pandemic seemed to keep mass shootings at bay, and the hope was that upon reopening, we would see positive progress. This shooting has demonstrated that progress has not been made. This event unfortunately represents one of the biggest drawbacks of our return to normal. If mass shootings are a strong indication of the United States returning to normal, then maybe we shouldn’t be comfortable with our “normal.”