Eckburg: Saying ‘not all men’ isn’t the ‘gotcha’ you think it is 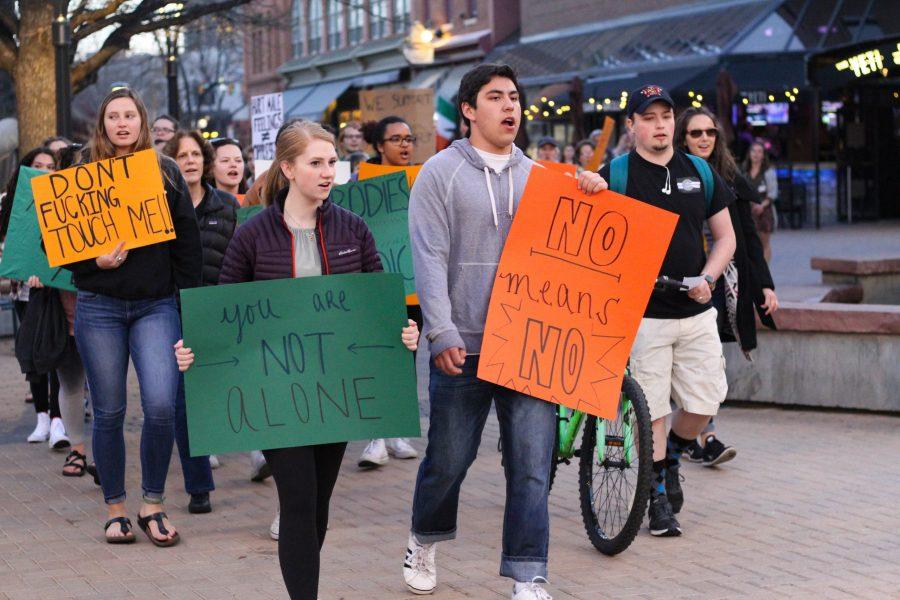 Participants of Take Back the Night march through the streets of Old Town with signs expressing messages of solidarity with survivors of sexual assault and domestic violence in 2018. (Ashley Potts | Collegian)

Editor’s Note: All opinion section content reflects the views of the individual author only and does not represent a stance taken by The Collegian or its editorial board. This column contains discussion of sexual assault, those who may be triggered should read with caution.

If you have spent any amount of time online, you have definitely come across the phrase “not all men” littering comment sections. This phrase is commonly used when women share their stories about times men have made them uncomfortable or put them in dangerous situations. A man may say something like, “You know not all men catcall women, that may have just been a fluke.”

Women are cautious of certain behavior in men not because “all men” exhibit that behavior but because they have experienced it enough to keep their guard up.

We, as college students, should replace the phrase “not all men” with something more validating and accepting. The message means well, but regardless of the intent, it often feels dismissive of women’s experiences. This phrase is commonly used by men, but we, as a collective, need to make an effort to redirect a critical point to one that is more validating.

Clearly not all men put women in dangerous situations, but current assault statistics warrant a sense of unease. Instead of immediately jumping to “not all men,” we should consider ways to validate women’s experiences and recognize they only reflect upon perpetrators, not the entire male population.

It is not all men, nor was it ever all men. Unfortunately, it is too many men.”

Sexual assault and rape occur on college campuses across the country.

According to the Rape, Abuse and Incest National Network, “Among undergraduate students, 26.4% of females and 6.8% of males experience rape or sexual assault through physical force, violence or incapacitation.”

It is more than possible for a man to be sexually assaulted or raped; however, college-aged women experience rape or sexual assault nearly four times as often. This, naturally, makes many women feel uneasy.

Women are taught self-defense and strategies to keep ourselves safe while also being informed on boundary setting. We are told to carry pepper spray and tasers; we are taught to aim with our elbows and make noise. Society has conditioned us to keep an eye out for the boogeyman that might leap out from behind any dark corner.

According to the National Institute of Justice, 85-90% of sexual assaults reported by college-aged women involve someone the survivor already knows. The boogeyman, more than likely, is not some stranger lurking in the alleyway.

It can be extremely hard to cope with trauma that comes with sexual assault or rape, especially when the perpetrator is someone the survivor knew and potentially trusted.

It is not all men, nor was it ever all men. Unfortunately, it is too many men.

Through their actions or lack thereof, too many men are perpetuating rape culture, either acting as perpetrators themselves or contributing to the harmful rhetoric and behaviors that objectify and sexualize women.

Such a culture allows and promotes victim-blaming, which disenfranchises women’s experiences. Discussions about assault are already difficult, and even more so when the perpetrator is someone the victim trusted and socially connected with.

Yes, “not all men” sexually assault women, but when those words directly follow a woman’s experience with assault, there is a problem.

Believe survivors. Dismissing women’s experiences is not new, especially due to most survivors knowing or being socially connected to the perpetrator. Many women are afraid to come forward due to the potential social repercussions of speaking out against their abuser. It’s estimated that 63% of sexual assaults are unreported, and of the reported, many are discussed only after a significant amount of time has passed.

Instead of saying “not all men,” we, as college students, should lend our sympathy and understanding to survivors and believe their stories without dismissing them by stating the obvious in a pointed way. Regardless of the meaning of the phrase or the intent, it is dismissive and silencing.

College-aged women are at a special risk of being raped or sexually assaulted; they should have space to openly discuss their experiences without being ignored, belittled or dismissed.

If you, or someone you know, has experienced sexual assault or rape you can call the National Sexual Assault Hotline at 1-800-656-4673, or explore other resources, including online chat options for both men and women. You are not alone, it is not your fault and your experience is valid.