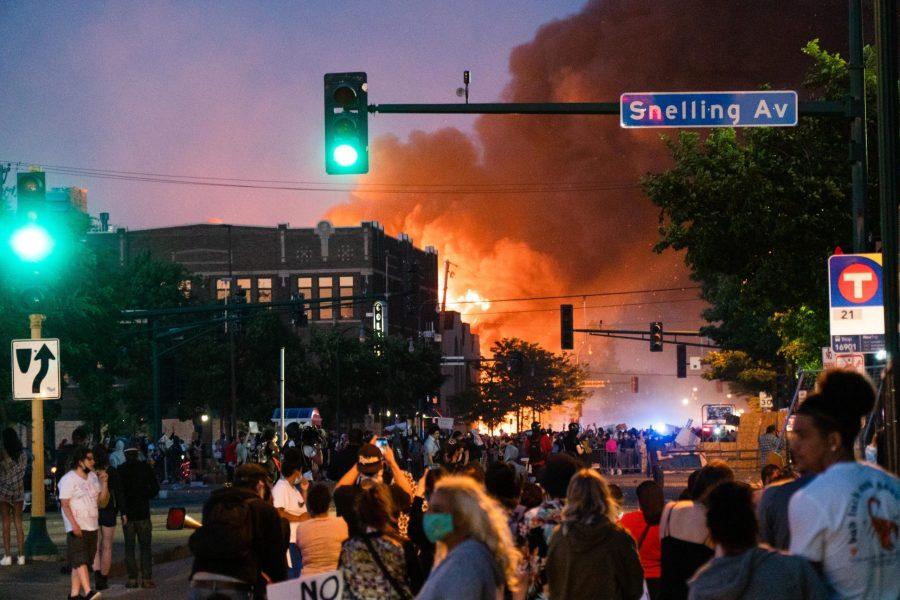 A building on fire near Lake Street and Minnehaha Avenue in Minneapolis, May 28. (Ben Leonard | The Collegian)

Editor’s Note: All opinion section content reflects the views of the individual author only and does not represent a stance taken by The Collegian or its editorial board. This column was originally published in The Los Angeles Loyolan.

I can’t tell you exactly why this is the moment this unrest is happening, but I can tell you that it is a long time coming. While there are many people and groups using this moment to promote their agendas or live out the anarchical fantasy, at the heart of this moment is a message that must be heard.

In many ways, Minnesota is a hidden gem. A place where the grass grows green, the people are nice, the streets are clean and the schools are good. Minnesota is home to 16 Fortune 500 companies, numerous prestigious universities and some of the best public schools in the nation. If you were to visit Minneapolis, it would genuinely be hard to sniff out the deep oppression here. Racist systems and pasts are cloaked in “Minnesota Nice.” But the undercurrent runs strong. In 2017, Minnesota was ranked second for racial disparities in the U.S., after our close neighbor Wisconsin. In the past three years, not much has changed. The Midwest remains one of the most unequal places in the country. Not the Jim Crow South, the Midwest.

This type of racism is a silent killer. It seeps in the cracks of homes and minds and infects everyone.”

Here, racism isn’t spoken. It sits inside the hearts and minds of people who won’t speak their minds out of fear of being challenged or called out. It sits inside and grows and festers until one day it comes out. Like kneeling on the neck of a handcuffed Black man. Because even if that officer thought he was just taking control of a situation, deescalating like the police academy taught him to, somewhere inside him (maybe deep, maybe on the surface) something told him to choke George Floyd to death because he is Black, and he should know his place.

This type of racism is a silent killer. It seeps in the cracks of homes and minds and infects everyone. For some, Minnesota is a near utopia. The schools are good, we have strong public utilities, a strong job market, and wonderful nature and weather. But, in reality, residential perfection is only for some. Minnesota has some of the largest equity gaps in the country for Black people.

This inequality is almost never addressed because it is easily ignored in places like Minneapolis. Redlining and unequal lending reinforces segregation in communities, so people can live their entire life without being exposed to the true diversity of this state. The median household income for a white family is nearly double that of a Black family. Seven percent of white Minnesotans live in poverty, but for Black citizens the rate is 27%. Only 24% of Black households own their home. Seventy-six percent of white households own their homes.

This isn’t just microaggressions and racist language and this isn’t just about cops killing Black people. This is about systems set in place that intentionally keep Black and brown communities held down.

This isn’t just about Black men being killed by cops, this is about the fact that the Black community’s systematic oppression is still not seen.”

Black America is not the same as white America. And yes, sometimes being Black is fun. Many days I’ve thanked God for my seat at a table. Being Black is like being part of an international club of understanding and support for one another. There’s culture, music, hair, fashion, food, literature and more that was created and established well before I, or my parents, were born. Some days, being Black is beautiful. It is a symbol of strength and courage, of love and community and of hope. But then I see another Black body, handcuffed, facedown on the pavement, lifeless at the hands of the police. A glaring reminder that all our Black culture and joy is just a cover. It is the threads we have had to weave to try and stitch up the gaping slashes that run deep within our community and individuals.

Eventually this moment will end. The protest will die down, and those who are privileged enough to ignore this oppression will begin focusing on other news. But I won’t and I can’t. This isn’t just about Black men being killed by cops, this is about the fact that the Black community’s systematic oppression is still not seen. This is about the fact that we still aren’t heard as we are screaming for you to hear us when we say that this country is founded on keeping Black people as lesser. This is about all the times we are told to calm down when we are faced with racist acts and language. When will you believe us?

This isn’t just about George or Breonna Taylor or Ahmaud Arbery or even Donald Trump. This is about years of abuse. This is about not being allowed to truly live in America. Our work is not valued, our bodies are not valued and our lives are not valued. This runs deeper than most of us can even begin to imagine. What started in my hometown is spreading. The outrage that we feel here in Minneapolis is not new, nor is it unique. These are feelings that have been growing in marginalized communities all throughout the country. Do you see us yet?

Do you hear us yet?