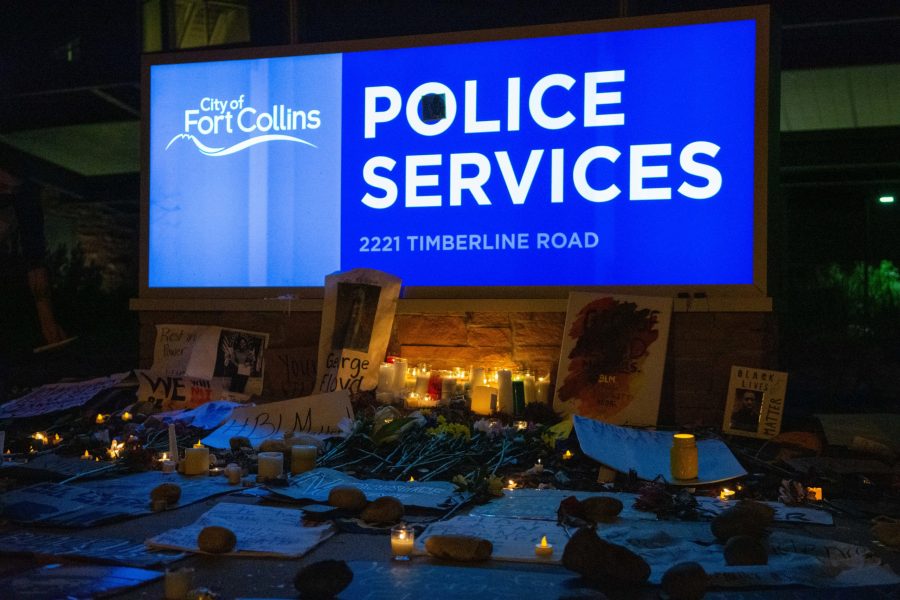 Fort Collins community members gather outside of the Fort Collins Police Department on Timberline Road to protest police brutality in solidarity with the protestors in Minneapolis, Minnesota and around the country, May 29. (Matt Tackett | The Collegian)

Editor’s Note: All opinion section content reflects the views of the individual author only and does not represent a stance taken by The Collegian or its editorial board. Names have been changed in this article to protect the identity of our source.

A few weeks ago, a Colorado State University student, who we are referring to as Marie, went outside the Fort Collins Police Services building to light candles for a vigil honoring George Floyd. She made a sign that said, “All lives will matter when Black lives matter,” and she was holding it as she peacefully stood outside. At around 10:30 p.m., a man identified as Travis Eastburn approached Marie and her boyfriend to express frustration with them, using vulgar language and calling the police.

Marie posted a TikTok on June 1 of her interaction with Eastburn, and NowThis shared it, where it has received 5 million views. Marie has made follow up videos on her TikTok reacting to the comments and responses she has received on the video.

Based on the video Marie posted, the interaction seemed like nothing more than a frustrated man that was woken up by cars honking as they passed Marie and her boyfriend. Really, the video scratches the surface of a more deeply rooted issue in the Fort Collins community, and it brings the accountability of Fort Collins Police Services into question.

The City of Fort Collins 2019-2020 biennial budget shows an expenditure of $48,029,710 on all police-related services in Fort Collins. The amount the city spends on cultural services and social sustainability programs doesn’t even reach half of that. There needs to be a serious reallocation of the budget in order to provide programs and services that better represent and are catered towards communities of color in Fort Collins. Marie’s situation shows why.

“You think you’re actually making a difference; you’re making people pissed off in this f****** neighborhood,” Eastburn said in the video. “There’s two people standing here holding a sign, and they’re having people honk as they’re going by,” Eastburn said in an initial phone call to the police.

“I was standing there silently,” Marie said. “My sign didn’t say anything about honking, nothing. We were there because we were trying to light candles for his vigil (and) we see this man frantically walking towards us. When he got there, he told us, ‘It’s 11 p.m., you’re waking this whole neighborhood up.'”

Marie recounts that when police arrived at the location where they were protesting that night, she stopped recording because she was “afraid of the fact that I’m not white.” CSU students have experienced a lot of racist incidents in the last year alone that have been tolerated and placed on the back burner by the CSU administration. It is no surprise that any non-white resident in Fort Collins would be on edge.

“I think the biggest concern for me was that he called the officers, and they wanted to bring five,” Marie said. “And when they did come, only one of them did the talking, and the other four surrounded my boyfriend and I as if we were gonna do something, but we weren’t.”

Fort Collins Police Services should be striving to go above and beyond in regards to representing all identities in Fort Collins. It is important to have police officers that represent communities of color, and Marie’s situation shows why.

“If an officer is wearing a badge, they are representing their department, meaning how the officer treated Marie represents how they were trained by the Fort Collins police to act in those situations.”

Marie said that when the police officers arrived, they didn’t want to see the video she recorded of what happened before they got there and only spoke to Eastburn.

“He basically ignored my boyfriend and I. Travis (Eastburn) gave the officer a fist bump and he left,” Marie said.

When Eastburn left, the officer told Marie and her boyfriend to understand his frustrations and that it was probably too late for them to be protesting.

Later on, Chief Swoboda was asked about Marie’s video during a listening session. Swoboda said, “I didn’t see the video, but did you hear of the gentleman and the police officer fist bumping?” Not only was Marie completely overlooked by police officers regarding their intentions to respectfully and peacefully protest, Swoboda did not seem to be completely aware of the situation or what really happened.

On the subject of disrespect and racial insensitivity in Fort Collins, Swoboda said, “From the police standpoint, there’s only so much we can do, but residents being nicer to each other is a human thing. I don’t have good answers as to why people don’t respect each other more.”

I think there is a good answer, and it is shown in how the police treated Marie while making friends with Eastburn. It is shown in the fact that the only person that was respected in the situation was the white male, despite him unnecessarily approaching Marie for peacefully protesting.

Police are supposed to set examples for how to treat people, and that is the example they set. The incident shows a complete disregard for people of color by the police department. If Swoboda really believes he “doesn’t have good answers as to why people don’t respect each other more,” maybe he should take a look at his own police department.

Many might be thinking that this is one incident with one police officer, and it is not representative of Fort Collins Police Services as a whole. That might be true, but if an officer is wearing a badge, they are representing their department, meaning how the officer treated Marie represents how they were trained by the Fort Collins police to act in those situations. The fact of the matter is people of color in Fort Collins are rightfully afraid of the police, and it is time to invest in better programs and resources for people of color and divest in Fort Collins Police Services.