The Rocky Mountain Collegian • May 31, 2020 • https://collegian.com/articles/opinion/2020/05/category-opinion-cooke-george-floyd-protests-demonstrate-deep-rooted-frustrations/ 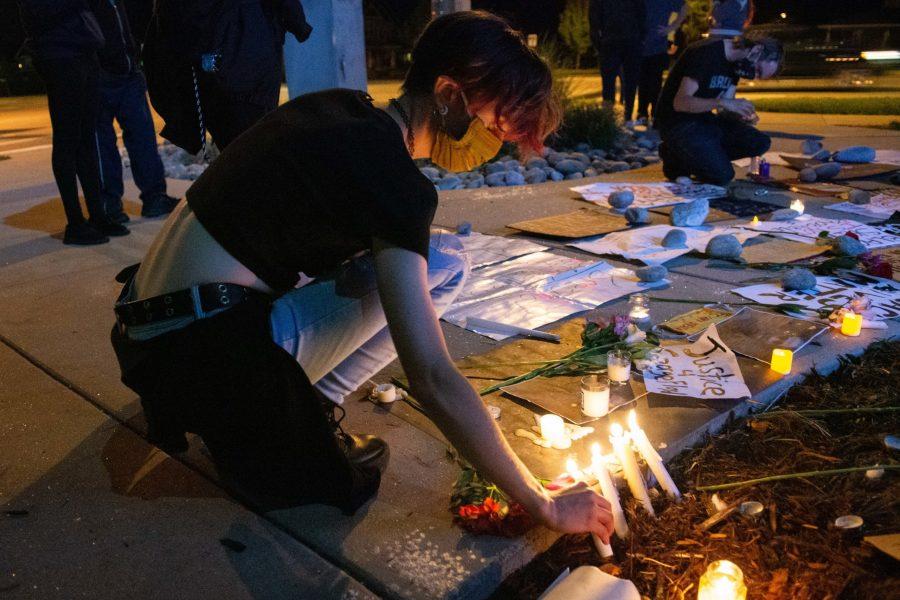 Emily Arnett lights a candle outside of the Fort Collins Police Services building on Timberline Road to protest police brutality in solidarity with the protesters in Minneapolis and around the country, May 29. (Matt Tackett | The Collegian)

“If you want a vision of the future, imagine a boot stamping on a human face — forever,” George Orwell wrote, describing a future of tyranny only a couple of years after World War II. Since then, the United States has witnessed almost a century of intense societal, technological and cultural changes.

“It’s too easy to denounce these extreme reactions as counterproductive and wrong. It seems that today, genuine change cannot happen without some sort of dramatic upheaval.”

These changes were supposed to be products of our victory over tyranny. But on Monday, May 25, America saw Orwell’s boot as clearly as ever on George Floyd’s neck.

I’m not saying that nothing has changed since 1949, only that something critical has not changed. This is the understanding at the heart of the ongoing, increasingly violent protests across the country. It’s too easy to denounce these extreme reactions as counterproductive and wrong. It seems that today, genuine change cannot happen without some sort of dramatic upheaval.

Race and racism is central to this discussion, but I think we are missing an opportunity to address deeper, foundational problems in America if we restrict our perspectives strictly to police brutality toward people of color. The structures of our society value human life less than economic viability, and Americans should be willing to do anything to uproot that structure.

Of course, this is not an endorsement of violence. If police brutality is the central issue here, then it would be hypocritical to endorse violence as a response. But the fact is that peaceful, nonviolent protests against this issue have not worked as they should. Colin Kaepernick’s expulsion from the National Football League in 2017 is a prime example of this.

Kaepernick’s kneeling protests contrast sharply with those of Americans earlier this year in Michigan, where armed protesters entered the state capitol building to demand an end to COVID-19 lockdown measures.

When an NFL player simply kneels in protest of social injustice, he is removed from his platform. When citizens with assault rifles enter government buildings to protest public health measures, President Trump calls them “very good people.” The hypocrisy here is evident, and it highlights something critically misguided about American society.

This past week’s protests have demonstrated that our society is not based on a common good consensus. If the common good was our country’s goal, then crowd control police would be unnecessary. What would there be to protest about if our systems of justice and opportunity actually worked?

Instead, the economy (an unjust, top-heavy superstructure) is our administration’s top priority. Getting it up and running again, despite the fact that it could mean a greater loss of life, has been the President’s number one concern since the COVID-19 pandemic came full force to America in early March. The continued growth of the nation’s wealth supersedes the health of the nation itself.

When Kaepernick found himself unwelcome to the NFL, it was because his message was controversial and “bad for business.” Making a stand on social justice, in his case, became a financial liability for NFL team owners.

“When an NFL player simply kneels in protest of social injustice, he is removed from his platform. When citizens with assault rifles enter government buildings to protest public health measures, President Trump calls them ‘very good people.'”

Our country’s preoccupation with economic matters at the expense of humanitarian ones reaches back before the Second World War, and it is responsible for generations of racism and systemic discrimination. This wrongful preoccupation has been more fiercely and openly criticized in the past 75 years, and the result is a history of less-than-successful, piecemeal reforms and social movements.

Meanwhile, our police have become a military of their own. This development of excessively armored police would be easier to digest if it weren’t for the fact that extreme cases of crowd unrest (Los Angeles in 1992, Ferguson in 2014 and now Minneapolis) were triggered in the first place by incidents of police brutality.

Here, a vicious cycle emerges. Citizens protest in the face of social injustice. Police meet them with force that is meant to suppress their protests. In turn, the protests intensify and so does the police response. Pretty soon, an American city is turned into something resembling a war zone.

This cycle is not conducive to a common good consensus. The common good, in this system, becomes indistinguishable from crowd control.

It is this cycle that rioters across the country today are reacting against. The systems in place today do not value human life; they value economic prosperity for sake of “getting back to normal.”

But normal does not mean improvement. Normal, today, means maintaining an unjust socioeconomic structure, with occasional and superficial changes made in response to criticisms. When it concerns American people of color, an entire history of protest and reform has led to the events of May 25.

It’s not hard to understand why some Americans may see extreme reactions as their only viable option. In the words of Atlanta’s mayor Keisha Lance Bottoms, “We are beyond a tipping point in this country.”

The systems in place today do not value human life; they value economic prosperity for sake of “getting back to normal.'”

I share the opinion of my director, Katrina Leibee, when she says, “There is no Republican and Democrat divide in an issue like this ⁠— there is just what is right and what is wrong.” Yes, Americans today must agree on what will be right and what will be wrong. We seem to be in unanimous agreement that excessive police force is wrong.

But when she says that “it is the natural, human thing to forgive,” I have to disagree. Forgiveness is learned over time, and it is much harder to practice than immediate retaliation. Forgiveness hasn’t exactly characterized this past week.

However, Leibee is right when she says that what happened is unforgivable. Americans are no longer willing to forgive a system whose interests do not put the common human welfare above all else. It is unforgivable that just one symptom of such a diseased system is the persistent and unjust treatment of a particular group of people.

I’m not advocating for violent unrest, but I do advocate for understanding the motives behind these protests. Americans can no longer forgive that everlasting boot in their face.