The Rocky Mountain Collegian • May 10, 2020 • https://collegian.com/articles/opinion/2020/05/category-opinion-bailey-the-collegian-allowed-me-to-grow-and-take-bigger-risks/

Bailey: The Collegian allowed me to grow, take bigger risks 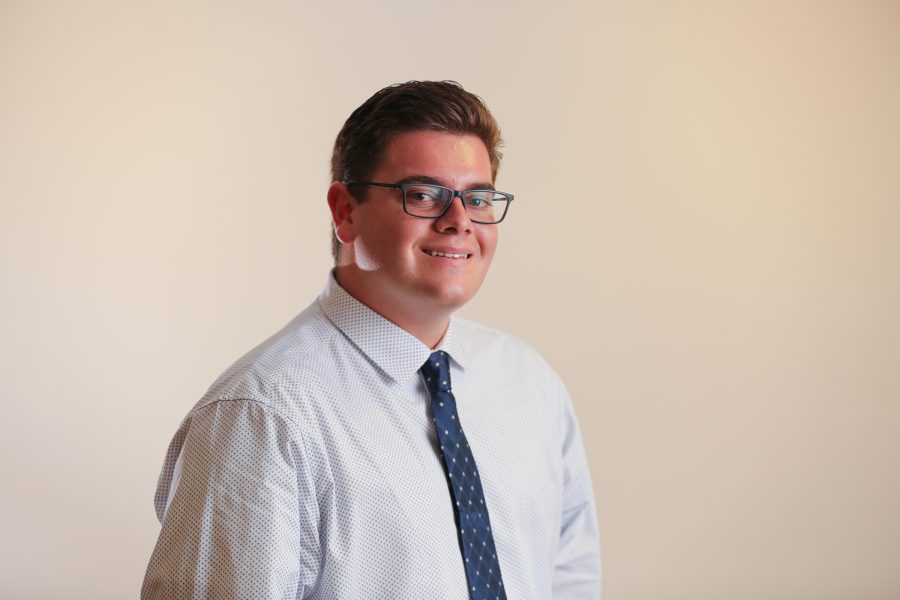 As I sit and type out this farewell article, struggling to piece together a proper lede for the 89th and final time now, I think back over the many experiences I wouldn’t have had throughout my time at Colorado State University if it wasn’t for The Rocky Mountain Collegian and the family I found there, and I realize that journalism — and probably life itself for that matter — is all about taking risks and working past the limitations we inadvertently set for ourselves.

A little over a year ago, I was sitting in a cramped, stuffy room with a group of about 20 students past midnight on a ship heading up the Gulf of Guinea, talking over the phone with Peter Arnett, a war correspondent most widely known for his work on the Vietnam War and his live coverage of the Gulf War for CNN, which made him a household name beginning in the early ‘90s. As my peers continued asking him questions about his life and career, I sat there frozen in silence with the same feeling I faced many times while writing for The Collegian: fear.

I began writing for The Collegian at the start of my freshman year at CSU in 2017. Before that, my heart was pretty much set on going to Boston University after I attended an investigative journalism workshop there, but after touring CSU for the first time and learning more about the student media opportunities on campus, I was convinced CSU was where the next chapter of my life needed to begin. I never would’ve imagined my time at CSU would ultimately revolve around my work at The Collegian.

Before attending CSU and writing for The Collegian, I wrote for my high school’s newspaper beginning my sophomore year, eventually becoming the public relations manager of the paper and, later, the news editor.

I heard a multitude of stories from people that forced me to — for better lack of words — break out of my shell. From interviewing a woman whose firefighter father was killed during the September 11th attacks, to talking with an alumna of my high school whose mother was killed by a bullet from gang crossfire in a nearby town, to memorializing a student and friend on the year anniversary of his death, I wanted to write articles that meant something to at least someone, and I fell more in love with journalism the more I wrote.

The first article I wrote for The Collegian was a preview of that year’s diversity symposium. The article I ended up with approached 2,000 words, but I didn’t realize I was only supposed to write a minimum of 500 words.

As my editor at the time sat next to me, backspacing line after line and graf after graf, I remember feeling so inexperienced, insecure and embarrassed; it felt as though I committed some deadly sin that absolutely obliterated any promise of a solid career as a journalist. In reality, it obviously wasn’t that deep at all; it was a learning experience from which I was able to improve on my subsequent articles.

Throughout the first 1 1/2 years I reported for The Collegian, I covered everything from Fort Collins City Council meetings, to on-campus events and the occasional crime brief, to in-depth profiles of people and groups, to larger events and issues related to the current political climate, to race and bias incidents.

I wrote articles about the community’s response to a Fossil Ridge High School teacher’s drowning off the coast of Oregon; a duo raising funds to help orphans in Uganda; CSU Chancellor Tony Frank’s final Fall Address as University president; an on-campus gubernatorial debate in 2018 between then-Democratic candidate Jared Polis and Republican candidate Walker Stapleton; Latinx students’ responses to the migrant caravan; a joint article detailing claims of sexism and racism within CSU’s College of Business; and a GoFundMe campaign for a CSU student who was recovering from a hit-and-run incident.

If it seems like I’ve used the word “I” many times in this article up to this point, I want to acknowledge that none of the aforementioned work I did would’ve been possible without the phenomenal group of reporters and editors at The Collegian who I came to know and love and who supported me every step of the way.

In covering such heavy and deep topics at times, I did often feel afraid, anxious and nervous when interviewing people or piecing together stories because I always wanted to ask the right questions and report stories in the most fair and accurate way possible.

After working with so many exceptional professionals at The Collegian, I learned how to become more courageous and selfless; I learned how to take bigger risks, and because of that, I took what was perhaps the biggest risk of my life last year: traveling abroad on Semester at Sea. Which brings me back to the Arnett story from the beginning.

My class of peers and I were almost an hour into our conversation with Arnett when my professor asked if anyone else had any other questions for him. We studied Arnett throughout the course of the semester, and I already came up with the infamous “bomb” question prior to the phone conversation based on our studies.

It’s been a real privilege and honor working for The Collegian as a reporter and editor. I’ll greatly miss working here, but I’m just as thrilled to see all the remarkable things the editorial board does next year, and I’m all the more excited for where The Collegian is headed.” Matthew Bailey, 2019-20 news editor, The Rocky Mountain Collegian

But it was something I was mortified to ask him given his stature as such a well-established and experienced correspondent. And in that moment, I thought about everything I did at The Collegian and all the people I got to know and work with along the way. I understood that I was only on Semester at Sea and in that exact circumstance that night because of The Collegian. So, I walked over to the phone and dropped the bomb, which went something like:

“In October of 1963, in a crowd of people, you watched a Buddhist monk set himself on fire in protest of President Ngô Đình Diệm and his suppression of Buddhists in Vietnam, and you said that as a person, you knew you needed to step in and help him, but as a journalist, you couldn’t do that. Do you agree with your decision today?”

Before delivering his response, Arnett said it was a good question. Just that one small compliment by such a huge role model in the field of journalism was one of the single greatest highlights of my experience as a journalist thus far.

Throughout my time at Semester at Sea, I was also part of a conversation with Ghanaian investigative journalist Anas Aremeyaw Anas, and I comprehensively studied the media environments of various countries, including Japan, China, Vietnam and Myanmar in relation to the Rohingya crisis. I gained invaluable skills and insight from these experiences that I brought back to The Collegian and to my new position as news editor during my final year.

Now that I’m at the conclusion of my role as news editor, I can honestly say I’m content with everything I’ve done this year, and I’m all the more grateful and privileged to have been able to work with such a highly driven and professional editorial board, as well as an incredibly talented staff of reporters on the news desk who astounded and inspired me with their work time and again.

As a mentor for Key Plus within Key Communities at CSU, I remember seeing and hearing how strained, exhausted and devastated my students were after the blackface photo circulated at the beginning of the year.

I remember feeling like I failed every person in the Black and African American community at CSU by not doing as much as I possibly could for various reasons. These are all things I continue and will continue to consider and dissect as I learn how to better advocate for my personal ideals and beliefs in the workplace.

But my feelings and frustrations were always heard and validated by the friends I made within The Collegian, and those friendships will be among the things I’ll remember most prominently about this year.

From filming a TikTok video at Arc Thrift Store and having a SpongeBob-themed photo shoot with Maddie, to laughing uncontrollably about so many things with Leta and Elena in the conference room of The Collegian newsroom during production nights, to eating chips and salsa and watching the Super Bowl with Amy, to having Lauryn nearby as life support when I was pretty positive my appendix was about to burst, to getting a ribbon and candy from Laura for my work for Best of CSU, I’ll never forget all these fun memories and all the fun times I’ve had with everyone at The Collegian.

I would never take credit for your stories or share them for any personal reason aside from gaining more experience as a storyteller, and I want to thank you for sharing your stories with the world.

I dedicate my farewell to you, the reader. You keep my passion alive; you consistently support and promote my work, as well as the work from everyone at The Collegian just by reading our content, and we wouldn’t be able to do the things we do without you.

Lastly, I dedicate my farewell to my parents. I wouldn’t even be here writing this right now if you hadn’t initially encouraged me to join my high school’s newspaper all those years ago. I wouldn’t have had all the incredible experiences and moments I detailed here if it wasn’t for your continuous love and support. I’ll never forget how you collected and saved every single print copy of the newspaper that included my articles. I love you both infinitely, and I wouldn’t have gotten to this point in my studies without you.

With that, it’s been a real privilege and honor working for The Collegian as a reporter and editor. I’ll greatly miss working here, but I’m just as thrilled to see all the remarkable things the editorial board does next year, and I’m all the more excited for where The Collegian is headed.

As always, thank you very much for reading.

Matthew Bailey was formerly the news editor of The Rocky Mountain Collegian. He can no longer be reached at news@collegian.com but can be reached on Twitter @mattbailey760.