Cooke: Instrumental music is just as valuable as lyrical music 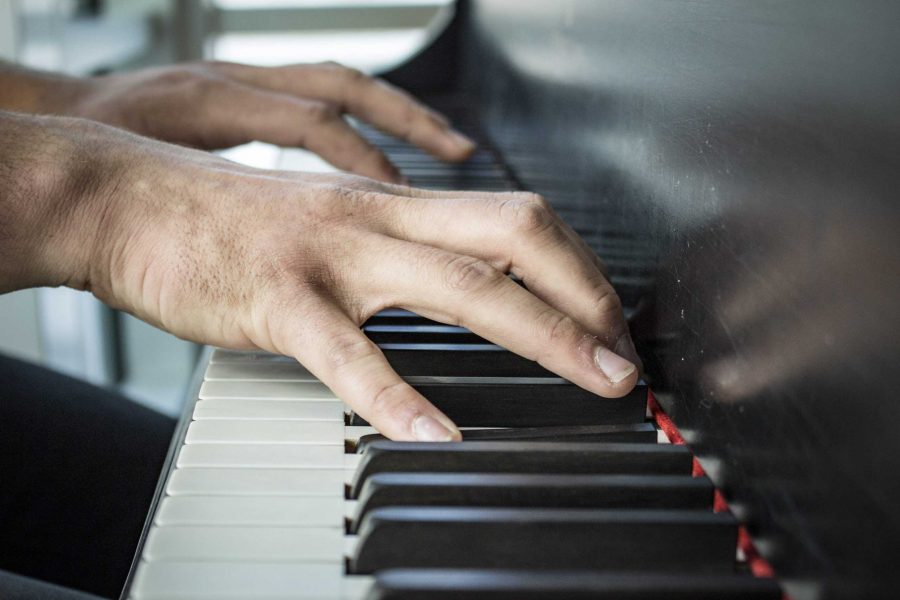 Thomas Re, a member of the marching band at Colorado State University, serenades those listening in the LSC as he practices the instrument he has been playing for 15 years.

Popular music is dominated by lyrics. Today’s most popular songs are works of lyricism just as much as they are pieces of musical instrumentation; radio stations favor lyrical music as well.

When was the last time you heard a song with no words on the pop music radio? It’s almost as if in popular American music, songs are incomplete without lyrics.

But music is more than the words written to go on top of it. The Merriam-Webster Dictionary defines the word music as “the science or art of ordering tones or sounds in succession, in combination and in temporal relationships to produce a composition having unity and continuity.” For some reason, we’ve forgotten that music can be purely instrumental, without spoken words to accompany the sounds and melodies we hear.

There are probably good reasons why Americans tend to favor music with words over music without words. For one, the meanings behind lyrics are more readily shared than the feelings that come from music.

The words to Journey’s “Don’t Stop Believin’,” for example, are easier to talk about and bond over than is the guitar solo at the end of Lynyrd Skynyrd’s “Free Bird.” In talking about both songs, the explicit words that are sung are much easier to deal with and discuss between listeners than the abstract sounds of musical instruments.

Another reason lyrical music is more popular than instrumental music could be the influence of hip-hop/rap as a genre in the wider music industry since the 1990s. An article published by The Atlantic explains how no other genre of music has had the same lasting influence on popular music that rap has. While this article points out the structural changes in pop music since rap blew up in 1991, I would argue that the heavy stress of words and lyrical delivery in music is also a part of that genre’s influence on the rest of pop music.

Whatever reasons Americans may have for liking lyrical songs over instrumental ones, the value of instrumental music shouldn’t be ignored. Not only is music without words entirely capable of expressing potent emotions, but it’s a more honest and direct way of doing just that.

While lyrics are concrete, and everyone usually understands the same words in the same order, true emotional experience is rarely so uniform. This isn’t saying that individual interpretations of lyrics are unilateral; on the contrary, listeners can have vastly different understandings of what words in a song mean. But the words, nonetheless, can’t change. In this way, lyrics are not as dynamic, and they’re more two-dimensional than instrumental music.

The music itself, however, is much deeper. Our first hearing of a song is usually just a scratch on the surface. Everyone has probably had the experience of listening to a song for the umpteenth time and suddenly hearing something (a bass riff, a guitar scratch, a drum fill) that they hadn’t heard before.

In this way, the music is multi-layered: a dynamic living thing with a heartbeat that can change whenever we focus on different parts of it. Quite literally, there are more layers of instruments in the recording of a song than the vocal track. Where adding more words can complicate the song, adding more instruments has better potential to enrich the music.

There’s also something more visceral and poignant about sounds that aren’t words. For example, hearing an actual cry of anguish evokes a sharper response than simply hearing the word “anguish.” In the same way, Van Halen’s guitar instrumental “Eruption” communicates something loud and epic, something important about the power of music, that words never could.

While this feeling can be harder to talk about than lyrics, that doesn’t take away from its emotional power. If anything, the fact that it’s indescribable only adds to its ability to affect its listener on a personal level.

Another shortcoming of lyrical music is the language barrier. The true depth of what a song or piece of music means can never be fully understood by someone who doesn’t speak the language in which the lyrics for that piece are delivered. We can infer general shifts in the emotional state based on fluctuations in pitch and rhythm, but the full poetry of the words is unattainable.

The instrumental music behind that piece, however, remains open to ears worldwide. In other words, anyone could listen to a playlist of German orchestra music (purely instrumental) and get the same experience from that music that a German speaker would.

Whatever reasons Americans may have for liking lyrical songs over instrumental ones, the value of instrumental music shouldn’t be ignored.”

Instrumental music is also a great option for students. Vaughn College published an article that lists the best types of music that enhance studying performance or help reduce stress, and their suggestions are all devoid of lyrics. Now more than ever, students could benefit from studying methods that reduce stress and optimize performance, and instrumental music can offer exactly that.

Music both with and without words deserves listeners no matter what. But the trend today seems to unfairly favor music that emphasizes lyrics, leaving instrumental pieces to the fringes of obscurity. Hopefully we can start to appreciate pieces like (but not necessarily as long as) Dave Grohl’s “Play” and understand that there is just as much popular appeal in music that doesn’t use words.