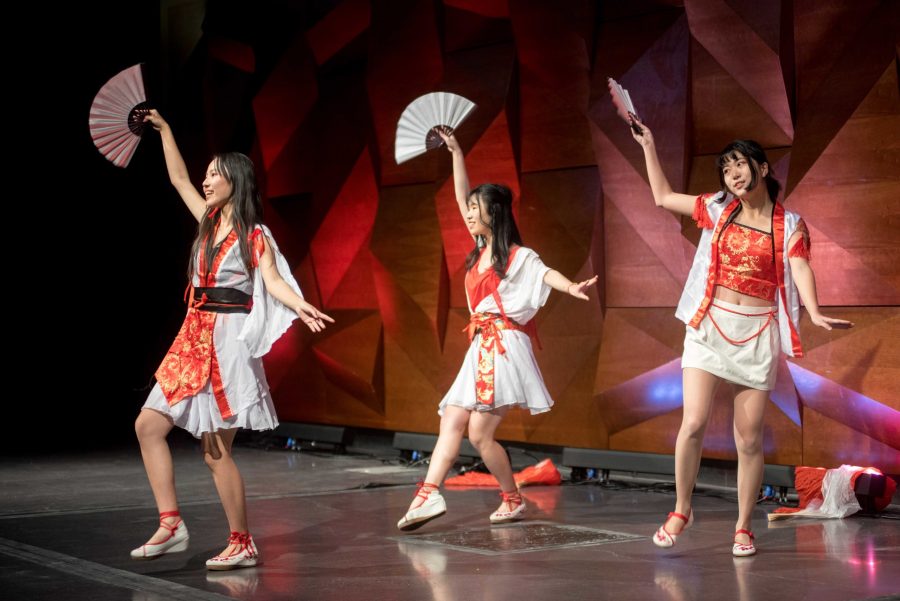 Students from the Chinese Student and Scholar Association perform a traditional dance at the World Talent Show in the LSC Theatre held during the 66th world Unity Fair on March 01, 2020. (Pratyoosh Kashyap | The Collegian)

Colorado State University’s Office of International Programs hosted its annual World Unity Fair on March 1. A day of booths, food and activities, the World Unity Fair was the finale of a week of international symposiums. It ended with a bang — a talent show where international students and those associated are given the chance to showcase dances, outfits and other aspects that contribute to the uniqueness of their cultures.

With the huge amount of representation from various countries around the world, the World Unity Fair had a large turnout, with most of the booths getting tons of engagement from those who attended. Not to mention it’s a fun and exciting chance for students and community members to participate in something new.

The World Unity Fair is an amazing experience. I appreciate the work that those involved put into making a memorable event for the community every year. Personally, I want to know the kind of impact it’s leaving on our campus and community as a whole. In other words, does it have the influence to leave a lasting impression on the student body?

A great tradition for CSU, the World Unity Fair establishes that our campus is quite involved with exchange and international students and rightfully so, as this is a day given to them to share and exchange their cultures.

On the question of influence, it’s no surprise that the World Unity Fair encourages a large turnout every year. Families and students alike come out to support those who participate. The talent showcase afterward is completely packed. People buy tickets to taste the warm spiced cider that Germany offers or to get their name written in Arabic by those manning the Kuwait booth.

The World Unity Fair is only one example of what students are able to achieve when enough of them show their support for an event.”

This type of event is not the largest that has been hosted on our campus, but it definitely brings in large attendance. It has a good reputation in being thorough in its representation of countries and is a great highlight for the semester.

Since the World Unity Fair is able to accomplish this level of appreciation among not only students and faculty, but Fort Collins residents, that must mean that a better sense of community is manifesting among CSU’s student body. And after the past instances of bias on our campus, we definitely need it.

This student body is not perfect, but events such as the World Unity Fair signify that we are in the process of developing greater relating skills with each other: skills like asking one about their traditions instead of assuming and wanting to get a better understanding of where another person comes from.

This, I believe, is the purpose of the World Unity Fair. I also believe that it’s a step in the right direction to continue to take after everything that happened last semester. Sure, it’s an annual, well-established tradition with the Office of International Programs, but it also shows that there is a lot of effort being put into this event.

Although it was missing some representation for South American and African countries, the intent aligns with the impact: the impact that’s involved with sharing various cultures with the intent to educate those around you. Also, as this is a learning experience, some countries were not given the chance to set up a booth this year. Hopefully they can get that experience the next time around.

As students, there are many ways that we can take advantage of opportunities in order to further our academic, social and personal goals. Now understand that I am not referring to mob rule, but rather mob influence. The World Unity Fair is only one example of what students are able to achieve when enough of them show their support for an event.

Joslyn Orji can be reached at letters@collegian.com or on Twitter @lazy_svndae_.