Bailey: Amy Klobuchar is a bad choice for students 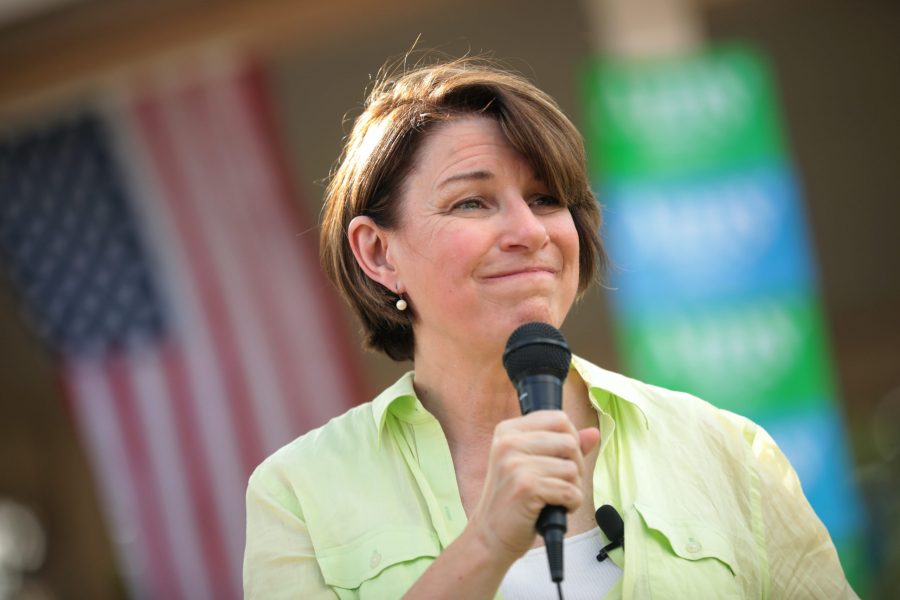 U.S. Senator Amy Klobuchar speaking with supporters at a meet and greet at the Adel Pavilion in Adel, Iowa. (Photo courtesy of Gage Skidmore via Flickr)

In the weeks leading up to Colorado’s primary, the opinion desk will be going head to head on individual candidates’ policy choices. We’ll be focusing on some of the issues we think will affect student lives and whether or not we think that individual candidate’s plan has what it takes. This week, two columnists are discussing Amy Klobuchar’s policies on the environment, education and immigration.
Environment:

Amy Klobuchar published her climate change plan on Medium. That choice doesn’t build my confidence, as it seems odd for a presidential candidate to post their policy plans on a blogging site. Her own campaign website sends you to Medium, where you are greeted by a long list of complicated ideas stated by bullet point, but I digress.

To her credit, Sen. Klobuchar’s plan covers many facets of climate change, with varied and different ways to tackle this complex issue. The plan’s failings come in how vague it is. For example, one bullet point is “Support research to improve negative emissions technologies,” and the text underneath that bullet point restates that idea in more words with no more direction.

Other points do the same, with bits of history on the topic but without details on the actual plan itself. It all just rings of a politician’s speech too much. She has some strong ideas with clear paths forward hidden throughout the plan, but she seems to be going for quantity of concepts rather than quality of execution.

Looking at her work with climate change, Klobuchar has a history of voting well on environmental issues. She also set aggressive environmental goals in Minnesota and clearly thought through how to reach those goals. She has the potential to be a great environmental president, but right now her plans are too vague. Because of this, Klobuchar is not the best choice for students when it comes to the environment.

Sen. Klobuchar isn’t erasing student debt, and it seems like she’s not going to change how the system works for debt much. Quite honestly, her plan seems to be a whole bunch of Band-Aids on a gaping wound.

Sen. Klobuchar also wants to increase Pell Grants and make financial aid more available. She wants to let borrowers refinance and give students increased financial literacy. She wants to make getting into school and staying in school a lot easier for many disadvantaged groups.

All of these things are great and should be done, but they don’t do a lot to alleviate the sea of debt drowning many young Americans. The plan also doesn’t change the system that allows schools to charge so much, and it doesn’t stop loan companies from being predatory. All it’s doing is telling students how to maybe dodge the predatory ones if they can.

I really like some parts of this plan, such as how she talks about increasing the minimum wage and having companies provide child care and paid family leave so that a full work week can have a chance of erasing debt over time. However, it’s not enough and doesn’t help where it needs to the most. Overall, Klobuchar is definitely not a student’s best choice for education.

Klobuchar doesn’t support open borders or decriminalizing illegal entry; she wants to reform, not abolish, Immigration and Customs Enforcement. She voted yes on making English the United States government’s official language — making all English versions of forms the sole, legal authority — which will hurt a lot of immigrants whose first language isn’t English. Sen. Klobuchar would back some border wall funding as “part of a broader bill that provides a path to citizenship for some undocumented immigrants,” according to Politico.

At the very least, Sen. Klobuchar wants to give a path to citizenship to Dreamers, undocumented immigrants brought to the U.S. as children, and has a history of being willing to help Syrian refugees. But, no, Klobuchar is not the best choice for students when it comes to immigration.

Overall, I went into this feeling very neutral about Sen. Klobuchar and left feeling disappointed.