Ortiz: Bernie Sanders is a good choice for students 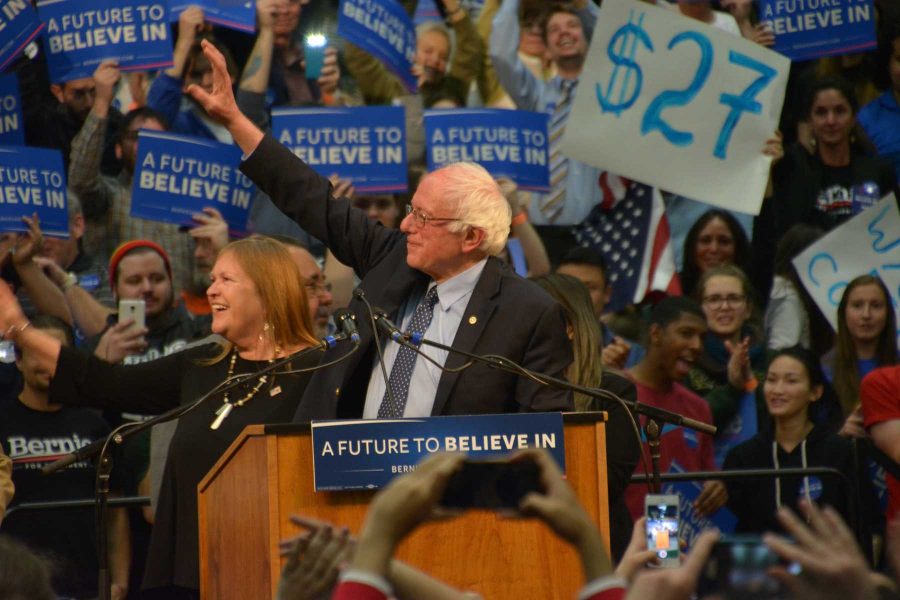 In the weeks leading up to Colorado’s primary, the opinion desk will be going head to head on individual candidates’ policy choices. We’ll be focusing on some of the issues we think will affect student lives and whether or not we think that individual candidate’s plan has what it takes. This week, two columnists are discussing Bernie Sanders’ policies on the environment, education and immigration.

According to Sen. Sanders’ website, “Climate change is a global emergency.” Current students are part of the generation that knows this all too well. When it comes to climate change, Bernie wants to stop building nuclear power reactors, ban fracking and impose government regulations to reduce all dangerous greenhouse gases.

As a student who cares about the environment, I agree with banning fracking everywhere because, even though it has its benefits, fracking has a negative effect on the surrounding environment and on one’s health. This is especially important to students at Colorado State University, considering surrounding cities and northern Fort Collins have active wells.

One of the main chemicals released from fracking is methane. It’s estimated that 4% of it goes into the atmosphere during the extraction process. Fracking increases air pollution, which increases the “production and long-term lingering of smog, which decreases the availability of clean air for workers and local residents.”

While there are many more beneficial points to Bernie’s environmental policies, such as the support of the Green New Deal, his stance on fracking is enough to be a benefit to students.

While many of Sen. Sanders’ educational policies are important to look at, I will focus on Bernie’s policy that public college should be free, and student debt should be canceled. This is a great policy for students to get behind because college was not originally made for everyone — college was made only for upper-class, white men.

The first university was Harvard University, where the graduating class was made up of “young men of good hope.” Early colleges in America were established by various religious denominations, and their central purpose was training men for the ministry. Now, universities are made up of all demographics.

Perhaps the most well-known candidate, Bernie Sanders is a self-proclaimed Democratic socialist who is running on changing the structure of government entirely. he is currently in his third term and previously served for 16 years in the House of Representatives, both positions in the state of Vermont.

Universities weren’t made with marginalized communities in mind. According to Sen. Sanders’ website, “We are going to end the racial and class disparities that persist throughout higher education. We will close these gaps and ensure all Americans, no matter their race, income, zip code or immigration status, receive a high quality education.”

Marginalized communities face systematic obstacles when applying to, thriving in and graduating from college. For example, Black first-gen students take out more student loans than other college graduates. The price for a college education is extremely high, despite it being a “necessity” in our country.

If college is a necessity, then it should be accessible. If this country really cares about education and making sure future generations are more educated than the last, making college accessible should be a priority.

Overall, I believe Bernie’s education policies are in the interest of students.

When it comes to immigration, Bernie believes that there should be an easy path to citizenship for Dreamers, young undocumented immigrants whose parents brought them to the U.S., and he wants to repeal the “improper entry by alien” section from U.S. Code.

Bernie’s belief that Dreamers should have citizenship is a great thing for students because Dreamers are individuals who often want — and are working hard — to get an education. They’re people who have been raised in America and likely want to contribute to their communities.

Immigrants and their children are sometimes stereotyped to be lazy and living off the government while not contributing anything in return. In reality, that’s a false and racist assumption made to look down on marginalized communities.

Republican Rep. Steve King states that he watched “as these packs of marijuana are on the backs of young men that are walking across the border. They’re hauling an average of about 65 pounds, and some of them, every day they take another load. They would qualify (for DACA), too.”

Sen. Sanders has the opposite of this mindset.

The first issue listed on his website is “a welcoming and safe America for all.” In this section, it states, “As president, Bernie will reverse the actions President Trump has taken to harm our immigrant communities. … And he will reject the hate and divisiveness spewed by some and ensure America is a welcoming and safe nation for all. Bernie believes that love will conquer hate.”

For students that care about immigration, Sen. Sanders’ policy is a good choice.