Huber: Elizabeth Warren is a bad choice for students 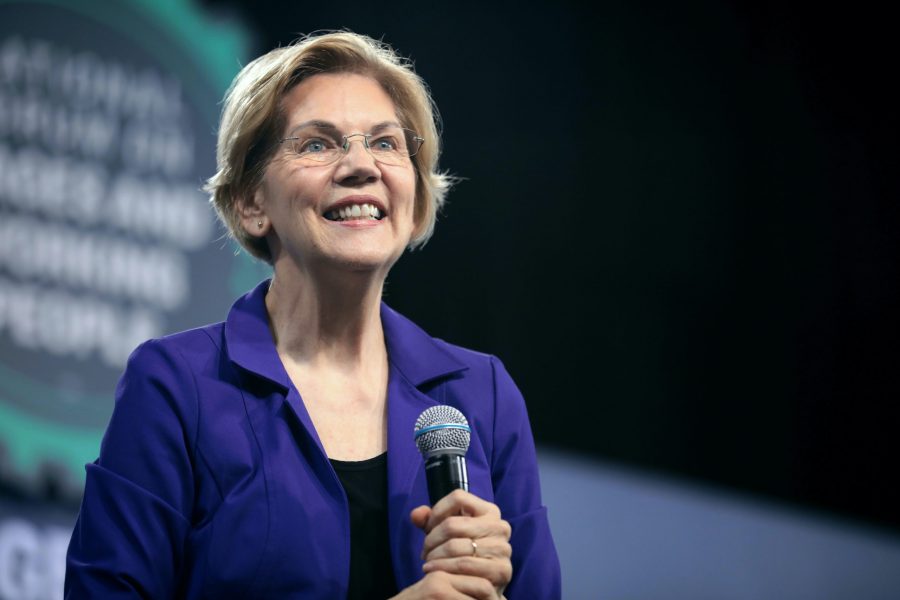 U.S. Senator Elizabeth Warren speaking with attendees at the 2019 National Forum on Wages and Working People hosted by the Center for the American Progress Action Fund and the SEIU at the Enclave in Las Vegas, Nevada. (Photo courtesy of Gage Skidmore)

In the weeks leading up to Colorado’s primary, the opinion desk will be going head to head on individual candidates’ policy choices. We’ll be focusing on some of the issues we think will affect student lives and whether or not we think that individual candidate’s plan has what it takes. This week, two columnists are discussing Elizabeth Warren’s policies on the environment, education and immigration.

Warren is a strong advocate for the environment — her policy incorporates ideas from the Green New Deal, an ambitious proposal to combat climate change. Warren’s policy plans on America running on 100% clean energy, vehicles and buildings by 2030.

For students who are concerned about climate change, Warren’s environmental policy is beneficial on the surface. However, according to Politico, it comes at a cost of $3 trillion with “an additional $1 trillion over 10 years.” This leaves us with the question of where she will find that money.

According to CNBC, there was no specification of where the $1 trillion would come from, “though Warren’s original climate plan details reversing tax cuts for the country’s most wealthy through the Tax Cuts and Jobs Act.” Warren’s website does claim that $1 trillion will come from “reversing (Donald) Trump’s tax cuts for billionaires and giant corporations.”

Another concern regarding Warren’s environmental policy is its longevity — if it’s going to succeed, it must continue after her term ends. President Trump has been successful at rolling back environmental regulations put in place by his predecessors, meaning a similar risk exists for any candidate’s long-term policies.

For these reasons, Warren’s environmental policies aren’t the best for students.

Warren’s education policy is a key aspect of her campaign. She focuses largely on two areas: increased funding for public education and making college more affordable.

Warren’s plans for public schools focus on providing additional funds to public schools and their employees, creating a more inclusive atmosphere and stopping the privatization of the U.S. school system. According to her website, Warren will spend “hundreds of billions of dollars (on) our public schools.”

Warren also advocates for affordable higher education through student debt relief and free tuition at public universities. She calls for the cancellation of up to $50,000 in student debt for 42 million Americans. Her plan provides student loan relief depending on annual household income.

According to Warren’s website, debt cancellation in combination with Warren’s Universal Free College program will cost the government approximately $1.25 trillion in the next decade. Warren plans to fund all of her education programs with her “Ultra-Millionaire Tax.”

The Ultra-Millionaire Tax claims to provide an additional $3.75 trillion by taxing the top 0.1% of American families. This value has been disputed by economics and finance professors Lawrence Summers, a professor at Harvard, and Natasha Sarin, a professor at the University of Pennsylvania, who only expect to see around 40% of Warren’s original estimate generated. So where is the rest of the money coming from?

Lack of success of such taxes in the past calls into question whether Warren’s education policy would be sustainable or even possible to implement. While on the surface a program like this would be very beneficial for students, the feasibility of funding her education policy is uncertain.

Warren’s immigration policy is a sharp contrast from Trump’s — she plans on decriminalizing immigration and reworking the system as a whole. Warren will make it easier to become a U.S. citizen by raising the refugee cap and streamlining the citizenship process.

Part of Warren’s plan also involves remaking Customs and Border Protections and Immigration and Customs Enforcement “in a way that reflects our values.”

Much of Warren’s focus within her immigration plan is on humanizing immigrants and reversing Trump’s actions. This policy is beneficial for students in terms of increasing global and cultural understanding and creating a kinder environment overall. According to Warren’s website, she will “insist on transparency and strengthen the authorities of independent internal watchdogs to prevent future abuses.”

If elected, Warren’s policies will increase federal spending by about half and cost the nation more than $30 trillion over the next decade. She plans to increase revenue by increasing taxes on employers and the wealthy, changing corporate tax policy, cutting military spending and increasing income from existing taxes. But for students who care about these issues, it’s unclear whether this will work in practice.

Allie Huber can be reached at letters@collegian.com or on Twitter @a11iehuber.