Ortiz: We need to stop protecting acts of hate 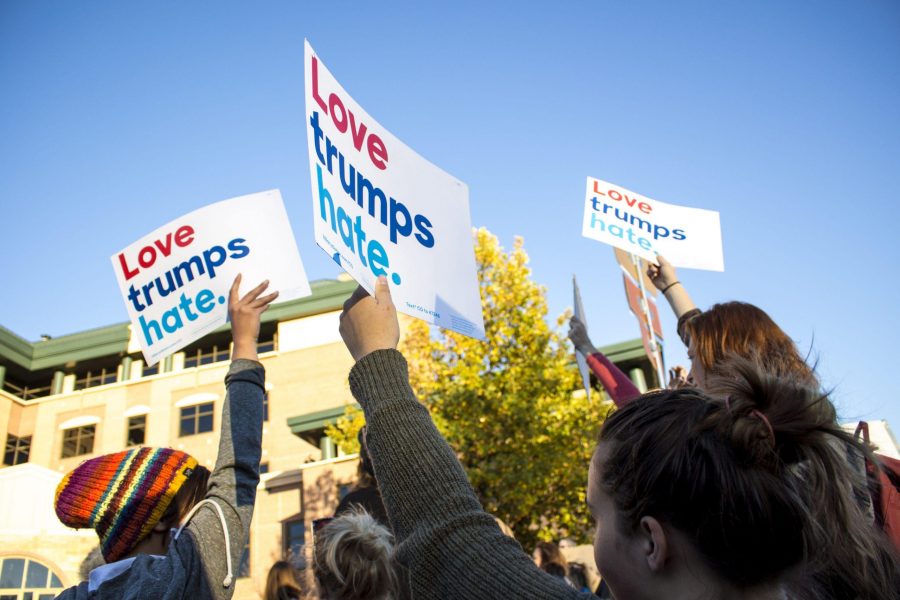 Fort Collins residents gathered for peaceful protest in light of the recent presidential election at Civic Center Park for the Peace and Solidarity Rally hosted by Fort Collins for Progress.

A picture of the West Virginia Division of Corrections and Rehabilitation training class No. 18 shows the 30 trainees, in uniform, doing the Nazi salute under a sign that read “HAIL BYRD!” which was a reference to their instructor.

The employees were suspended on Wednesday, and the state’s Division of Corrections and Rehabilitation called the image “distasteful, hurtful, disturbing, highly insensitive and completely inappropriate.” Secretary of the Department of Military Affairs and Public Safety Jeff Sandy did not say how many employees were suspended or how the picture was brought out in the first place.

The picture shows the officers doing the Nazi salute, but their faces are blurred — why? Why should their faces be blurred? For their privacy and protection?

Many of us at Colorado State University know how quickly retaliation and anger can spread from a picture being put online. Now, I want you to imagine how much worse the response would’ve been if The Collegian or the University had censored or withheld the blackface picture and the message those organizations would’ve been sending by doing so.

These officers knew exactly what they were doing. They knew what the Nazi salute was, and they know what Nazis did and stood for — and they thought it was OK to do it for a picture.

If the purpose of blurring their faces was to protect them from any type of retaliation, then it is made even clearer that this country stands next to and protects Nazis.

The officers in the photo deserve all the hate coming their way and don’t deserve to be protected. Yes, they have families, but they should have thought about that before choosing to take a picture doing the Nazi salute — a salute that only represents hatred.

If the purpose of blurring their faces was to protect them from any type of retaliation, then it is made even clearer that this country stands next to and protects Nazis.”

The officers probably thought that they would not suffer any consequences because they are protected by the badge — which only highlights the privilege and contribution of oppression that is imbedded and kept alive by police departments.

According to a letter from West Virginia Division of Corrections and Rehabilitation Commissioner Betsy Jividen, she ordered that copies of the image should be destroyed, sent to her office or be kept from circulating “to keep its harm from spreading.”

Unfortunately, it’s unlikely that the officers will be terminated, but I hope Justice does not stop fighting for their termination. We have seen our government and policies defend corrupt, hateful and racist officers countless times — whether that’s through the killing of unarmed Black men/boys, the physical abuse toward people of color or minimal sentences to cops raping women.

And for those of you who are going to come for my throat saying, “Not all cops are bad,” or “Let’s see who you call when you’re in danger,” think about your privilege. Chances are, if you do not feel discomfort or anger toward cops, it is because you do not have to worry about them using their power against you.