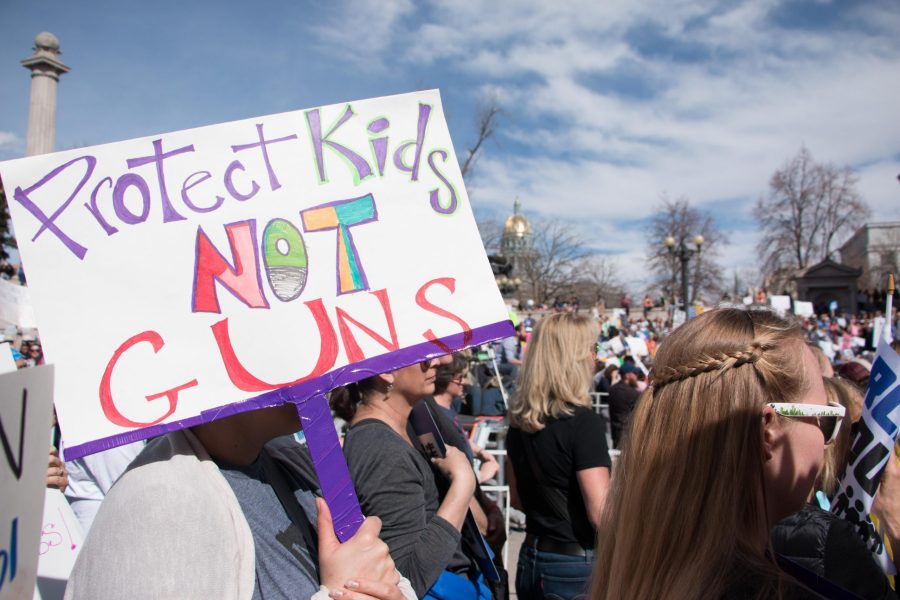 The March For Our Lives event was coordinated by students with the intention to eliminate gun violence in schools (Erica Giesenhagen | Collegian).

With the Poudre School District taking part in lockdown drills in an effort to increase security and emergency preparedness, the argument over how we should be protecting our children ignites once again.

Encouraging children in K-12 schools to be aware of what to do when danger arises, like an armed intruder or an attack from within the school itself, is certainly a step forward — but that isn’t enough for some parents.

Mary Aversa, a mother of a child who was attending high school at the same time as the Parkland shooting on Feb. 14, 2018, thinks we should begin with gun control.

“You shouldn’t be able to just take out a gun without extensive background checks,” Aversa said. “Not every gun retail or third-party seller (takes) the steps to do that.”

That fact is unfortunately true. A columnist of The Philadelphia Inquirer purchased an AR-15 in seven minutes. With just showing her ID, Helen Ubinas only needed to spend a few minutes to fill out some paperwork to pick out her rifle.

But it obviously doesn’t happen all over the United States, and it doesn’t happen in every single gun store, but it still does happen. That fact is the thread that’s slowly unraveling the sweater that all of our safety depends on. We can all agree that frequent mass murders by people with guns are a problem.

Sheltering our kids from the issue only hurts them in the long run. they shouldn’t be terrified to come to school, but prepared and aware instead.”

The solution isn’t a simple fix. With our right to bear arms protected by the Second Amendment, we can’t just infringe on that right and attempt to remove firearms from people’s homes without violently starting a second civil war.

Despite how easily candidates, such as Democratic presidential candidate Beto O’Rourke of Texas, promise to get rid of this issue, it could take a lot more work than one administration can deliver, even if it is supported by the majority of American citizens.

People are beginning to realize how truly dangerous guns are. They want bulletproof backpacks, pepper spray and, like PSD, more lockdown drills. It makes sense.

Just earlier this month, a high school student killed two people and injured more in Santa Clarita with a .45-caliber handgun. We can’t put down the tragedy of one shooting long before we hear the terrible news of another one.

As much as we need to recognize preventative measures to stop these terrible events from happening before they do, we should also teach reactionary efforts. It’s not an ideal situation to tell our kids that they may have to be survivors in an event like this, but we want them to survive.

As negative as that sounds, we want them to be survivors instead of victims, and that’s the reason why these lockdown drills need to happen.

If anything, more of these efforts should be made in teaching children to defend themselves. Our ignorance of the issue shouldn’t be costing students their lives. Sheltering our kids from the issue only hurts them in the long run. They shouldn’t be terrified to come to school, but prepared and aware instead.

PSD recognizes this problem, and they’re implementing the measures first. Yes, you can rage about how children shouldn’t be taught this at such a young age, and it could be shocking to them to realize that our gun control isn’t as protective as it should be, but the real world is harsh, and we can’t hide that.