Leibee: You have a responsibility to stand up to your family 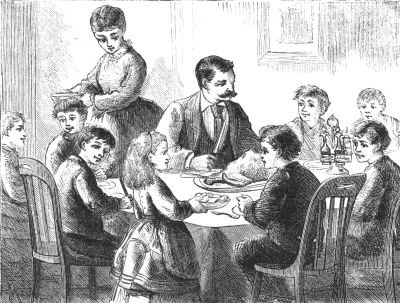 There is a generational difference between us, our parents and our grandparents. The holidays might be a time when we notice these differences because of things our family members say. As my colleague Kenia Ortiz said in January in her column “It’s okay to not want to go home in college,” many students feel their values and beliefs drifting from those of their family members after they have entered college.

While it’s extremely uncomfortable, if you have a spouse or friend that you bring home and your family says something racist, sexist, homophobic or offensive at all, you have a responsibility to stand up to them, especially if that spouse or friend is a person of color or identifies as LGBTQ+. It’s your responsibility to call out your family members.

you should never let anyone, no matter your relationship to them, get away with saying something insensitive or offensive.”

We often get the question: “What would you do if you were in a group setting and someone said something highly offensive, such as the R-word or the N-word?” Thinking about the situation, most of us say we would call the person out, but in the actual situation, we might feel uncomfortable or awkward. We might actually feel as though we don’t want to anger or argue with someone, especially if they are someone older who we respect.

However, feelings aside, you should never let anyone, no matter your relationship to them, get away with saying something insensitive or offensive. This may seem obvious, but standing up to family members can be really difficult, even in group settings.

Many older family members will use the excuse that it’s just their sense of humor or the typical excuse that millennials are snowflakes. It doesn’t matter what the excuse is or what argument it will cause — telling family members and friends where their thought patterns are flawed and where they might be offending others is important.

As I said in a previous column titled “What ‘OK, boomer’ really means,” many people simply brush off offensive remarks from older generations because some people don’t seem to be open-minded about changing. While the phrase “OK, boomer” is humorous and can be used to end uncomfortable conversations, it should not be a replacement for trying to educate people on the nature of their comments.

when everyone is arguing politics over thanksgiving dinner and you’re trying to find the drink with the highest alcohol content pic.twitter.com/IdL6SVKxR0

You should attempt to educate your family members and friends simply because offensive remarks are inexcusable. Also, you don’t want someone you care about to feel uncomfortable around your family and friends. Not standing up for your friends of marginalized identities might make them feel as though you agree with, or are okay with, the comments being made.

Standing up to family and friends is never easy, but it’s necessary to not only educate them, but to make people of marginalized identities comfortable around you and your family.

Katrina Leibee can be reached at letters@collegian.com or on Twitter @KatrinaLeibee.