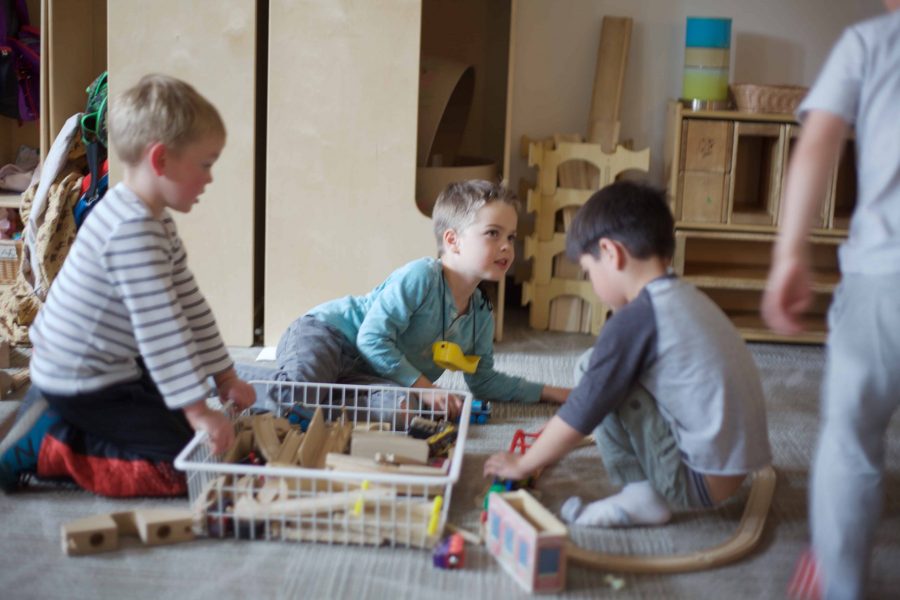 Kids play with a train set in CSU’s Early Childhood Center April 16. Karen Rattenborg, the executive director of the center, stated that the first five years of life “is a critical time for the development of human beings, so, I know what I do here, training CSU students and providing childcare services, really is foundational for their well-being.” (Ryan Schmidt | Collegian)

Children are our future, but they aren’t everyone’s thing.

More and more people are choosing not to have kids, which is, overall, a good thing. If someone doesn’t want a kid, they probably shouldn’t have one — not wanting a kid and having one isn’t the greatest setup for being a good parent.

A side effect of this decline of new parents, though, is that there is a rise in people who think it’s okay to put down or hate kids. You know those friends who go on rants about how loud or annoying they find all children to be.

Those people need to get over themselves.

All adult humans are children or babies at some point. It’s a phase of our life, and, just like it would be insane for a butterfly to hold ill will toward all caterpillars, it’s odd for an adult human to dislike all people in a certain phase of life.

It’s not like kids have the chance to defend themselves from people like this anyway. Almost no child has the confidence to stand up to an adult they barely know to defend all people of their age group, not to mention that children have some of the lowest amounts of given rights of any group in America. They have very little control over their lives and generally make very few meaningful choices to society at large. It’s a weird power tactic to hate such a weak group of people.

Everyone should have the bare minimum of patience and understanding to tolerate a child’s presence without complaining, and the decency not to bad mouth this giant swath of humanity.”

Children are loud, they are messy and they don’t know that many things. Overall, your shared life experience with any given 7-year-old is limited, but that may be because they are one-third your age and don’t have fully-developed brains. They are trying their best, and they need lots of help as we all did when we were younger.

I’m not saying everyone should sign up to be an elementary school teacher. Working with kids can be frustrating and tiring, and it takes an immense amount of patience. But everyone should have the bare minimum of patience and understanding to tolerate a child’s presence without complaining and the decency not to bad-mouth this giant swath of humanity.

kids are annoying … thats it

This also extends to the things that kids love. If you’re 23 and complaining about how dumb Fortnite dances are or whatever the next phase of things kids love is, then you are a petty person and a forgetful one; the things we loved as kids were just as pointless and just as stupid. I for one, as a member the generation who loved Silly Bandz, have no room to judge.

Next time you’re on a plane and a kid or baby is fussing or getting upset about something, take a moment and remember that they are trying their best, and they still have a lot to learn. It’s a big world, and they’ve just started their journey. What will it cost you to have some empathy instead of anger toward this group with such little power?