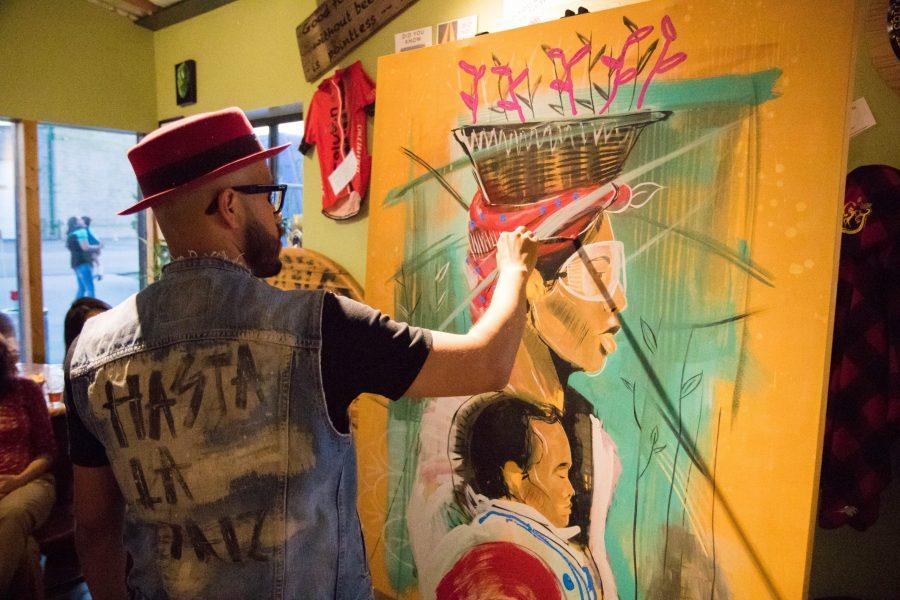 Armando Silva, a Greeley based Latino artist, live paints a portrait of what he hears from the five Latina women's stories at FoCo Speaks Ciencia! All of the money raised at the event went to CienciaPR, a Puerto Rican non-profit that encourages young women to pursue science (Julia Trowbridge | Collegian)

Latinx cultures are recognized for their beauty in food, music, art and history. However, the true art — pride and power — comes from the women in the community. In a culture where machismo is deeply rooted, there have been women who push back and inspire their community.

As a teenager, Menchú was prominent in the women’s rights movement and later joined the Committee of the Peasant Union (CUC). She taught herself Spanish, her native language being K’iche’, as well as other Mayan languages to help educate the Indigenous peasant population about resistance to military oppression.

Because of this, Menchú went into hiding and proceeded to flee to Mexico. Menchú continued to fight against the military oppression in Guatemala by being part of the founding of the United Representation of the Guatemalan Opposition (RUOG). In 1992, Menchú was awarded the Nobel Peace Prize.

Dandara of Palmares was married to Brazil’s greatest Black leader, Zumbi dos Palmares. The two of them fought for racial equality and to end slavery in Brazil, and after Zumbi died, Dandara continued to fight.

In Brazil, November is the Month of Black Consciousness. Zumbi is learned about and praised, yet Dandara is not, due to not only sexism, but racist sexism. It’s hard for a woman’s efforts to be recognized, but Dandara was also a Black woman — contributing to why she goes uncelebrated.

“Dandara is the most representative of female leadership in the Republic of Palmares,” said anthropologist Maria de Lourdes Siqueira, a retired professor from the Federal University of Bahia. “She participated in all the battles, all the fights, in everything that was created, organized, experienced and suffered there. There is no known image of Dandara, but because of her demonstrated talent, she is a strong beautiful woman: a warrior, persuasive leader and obstinate for freedom.”

While all of these Latin women are inspiring, it’s our aunts, cousins, mothers, sisters and grandmothers that should inspire us too.

María Eva Duarte de Perón, also known as Evita, was the wife of the Argentine President Juan Perón during the 1940s and 1950s. Evita was an actress and radio star, and as Perón’s wife, she advertised his campaign on her radio show and accompanied him to campaign events.

Perón and Evita put their political weight to use to pass Argentine law 13,010, which granted women the right to vote. Evita established the Eva Perón Foundation, which “provided an unprecedented amount of relief for Argentina’s poor: By 1950, it was giving away annually hundreds of thousands of pairs of shoes, cooking pots and sewing machines. It provided pensions for the elderly, homes for the poor, any number of schools and libraries and even an entire neighborhood in Buenos Aires, Evita City.”

Evita died in 1952 at 33 years old of uterine cancer. Evita was so adored that her legacy continues through books and paintings. In 1978, Andrew Lloyd Webber and Tim Rice wrote the musical “Evita.” It won several Tony Awards, and in 1996, it was made into a movie with Madonna in the lead role.

Known for being a Mexican writer and feminist, Hermila Galindo focused on advocating for women’s rights, politically and socially. Through her involvement in the Mexican Revolution, Galindo found that there was discrimination against women in the Civil Code of 1884.

Married women were referred to as “imbecillitas sexus,” which meant an imbecile by reason of her sex. Galindo spoke up about this and said that a wife “has no rights whatsoever in her home. (She is) excluded from participating in any public matter (and) she lacks legal personality to draw up any contract.”

In January 1916, Mexican women held their first feminist conference. Galindo was unable to attend but sent a paper to be read by her friend which was called “Women in the Future.”

In it, “Galindo proposed not just legal equality for women, but a wholesale rethinking of woman’s place in the world and an end to the culture of machismo. The Catholic Church, she claimed, supported the culture of male domination and feminine subordination, thus maintaining an unhealthy status quo. She suggested that all girls in school receive sex education — instruction in anatomy, physiology and hygiene — in order to be fully informed and in control of their bodies.”

While all of these Latin women are inspiring, it’s our aunts, cousins, mothers, sisters and grandmothers that should inspire us too. They inspire us in their own way, whether that is through resilience, selflessness or dedication.

Despite the machismo and strict gender roles, Latin women are fighters and will continue show their strength in education and resistance.