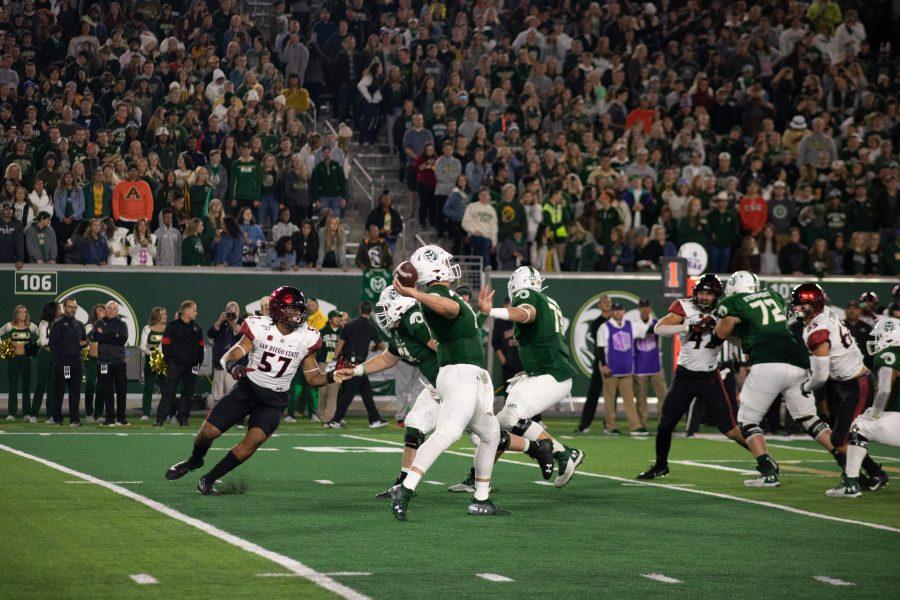 Patrick O'Brien prepares to pass the ball down the field, during the homecoming game against San Diego State. CSU fall to SDSU 24-10. (Devin Cornelius | Collegian)

It’s no secret that Colorado State University’s football team has hit another low.

With only one win this season, Head Coach Mike Bobo’s record is now 25-29 in his time at CSU. The University continues to struggle on the field and is enduring one of its worst seasons yet. Despite this, millions of dollars are poured into CSU’s athletic program, which, as one economics professor noted, continues to lose money.

Last year, $6 million in student fees was used to pay for athletics.

Bobo is the highest paid coach in the Mountain West conference, with one of the worst records, at an annual salary of $1.8 million. Boise State’s coach, the most comparable at $1.5 million, is considered one of the best coaches in the conference.

The sheer amount of money spent on CSU’s disappointing football team illustrates an alarming trend in investments. By dumping money into football, CSU is failing to support all of its students and, by doing so, is degrading its academic integrity. So why is CSU continually pouring money into a floundering football team and continuing to lose money?

Some classroom spaces on campus still contain asbestos, yet students pay thousands just to study here. Halfhearted renovations are in the works, but they will not benefit students for years to come.

By dumping money into football, CSU is failing to support students and, by doing so, is degrading its academic integrity.

Meanwhile, students must contend with the soaring price of a college education. From 2000-2016, the state of Colorado’s higher education funding dropped 33%. Tuition has continued to increase and students are on the hook for paying more.

It is now more expensive than ever to go to college, which is seen as a necessity in today’s job market — however, the average student loan debt is $26,000, which can severely impact job prospects after graduation.

While the Board of Governors recently endorsed Proposition CC, which could increase higher education spending through investing state tax revenue into education and transportation, there is no guarantee that it will pass or that it will freeze tuition rates.

With the money shoveled into Bobo’s bank account, CSU could help fund thousands in student scholarships or experiential learning programs.

The $6 million in student fees allocated for athletics could go toward freezing tuition rates or reinvestment in student programs, which would significantly benefit the student population.

By investing in student programs, CSU could increase their retention and graduation rates, which would go a long way for recruiting students.

CSU’s sheer unwillingness to change, and their continual re-allocation of academic money into football, hints at a dangerous trend. How will CSU continue to entice students in the future? Will Canvas Stadium be enough to draw students onto campus?

The football team’s lowest point shouldn’t be its worst season. Students should be outraged until the team hits the lowest balance in its bank account.