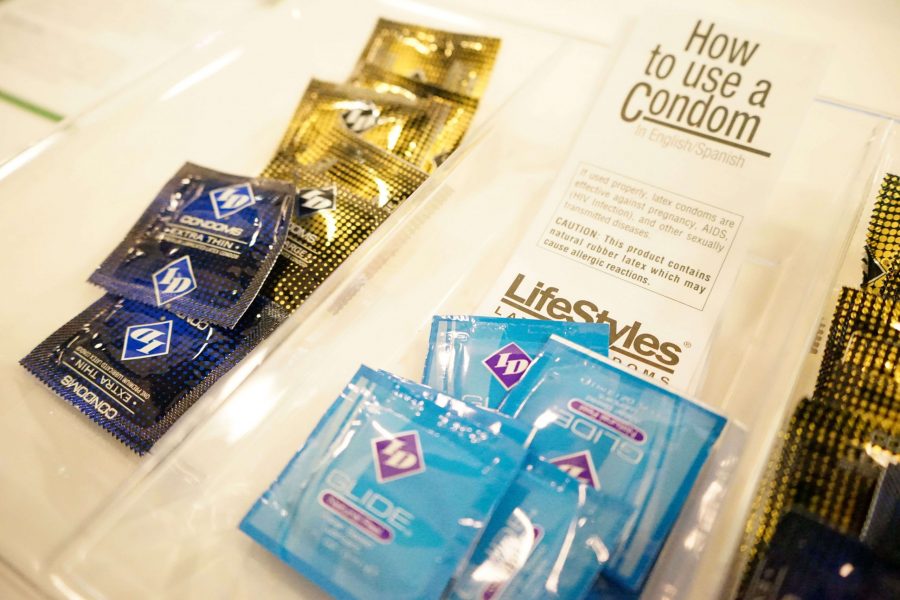 A tray of free condoms at the Colorado State University Health Center. The Health Network at CSU provides a variety of sexual health resources to students. (Skyler Pradhan | Collegian)

I remember being surprised during my first year at Colorado State University about how openly people talked about sex. My resident assistant talked about it, posters on campus touched on it and I remembered seeing a student walk around campus dressed as a giant condom.

Now, as a third year resident assistant, I have access to free condoms to provide for my residents through CREWS. I remember my first year as an RA, I had a basket of condoms outside my door for my residents to take.

At CSU, many students come from backgrounds where sex is shamed or never spoken of. Further, it’s not just sex that isn’t spoken of, but also important topics such as STDs, birth control, getting tested, pregnancy, abortion, Plan B and consent.

Current first year residents of mine shared their points of view with me regarding sex being discussed openly on campus.

“It was such a surprise to me that you put out condoms for us,” Summer Lovato, animal science major, said. “In high school we were told that nobody should be having sex and they never went into further explanation.”

Openly talking about sex doesn’t jusT cover sex education, but also the importance of communication and self-esteem when it comes to sex.

“Growing up, my family didn’t really talk about sex until I started (at) CSU,” Mollie Metts, family and consumer science major, said. “My mom would (ask) me every time I asked for birth control, which was for health reasons, why did I need it. She kind of just shut me down and never talked about it and continues to do so. It’s like it’s taboo to even talk about in my family.”

A lot of students come to college thinking that sex is something to be ashamed of or come to college ready to experiment. Either way, students need to be provided with the information on not just what sex is, but the dangers of having sex without making smart decisions such as using contraceptives, getting tested and knowing that non-consensual sex is not sex — it’s rape.

At my first floor meeting, I let my residents know that I expect them to be adults when it comes to free condoms in the hall. We also covered how not everyone is sexually active in college, contrary to popular belief. I assured them I wasn’t assuming they were all having sex or that they will be. But for those who do choose to be sexually active, they should not be ashamed in doing so and look for resources regarding protection and further sexual education.

According to psychologist Lisa Firestone, an expert on relationships, “Closeness, self-esteem and open communication are essential to lasting, healthy sexuality. They are also the biggest factors in sexual satisfaction.”

“Coming to college and having the comfortability to talk (about sex) and listen and not be judged or scolded is very nice and comforting,” said Grayson Narlinger, business administration major.

Openly talking about sex doesn’t just cover sex education, but also the importance of communication and self-esteem when it comes to sex.

Being open and being able to have these conversations allows students to be comfortable asking questions — whether that is going through sex-ed for the first time or looking for next steps. Talking about sex lets students know that it shouldn’t be rushed.

Sex will happen at its own time and when people are comfortable. And when it happens, there are resources to help them and their partner(s) plan and make the decision that is safest.