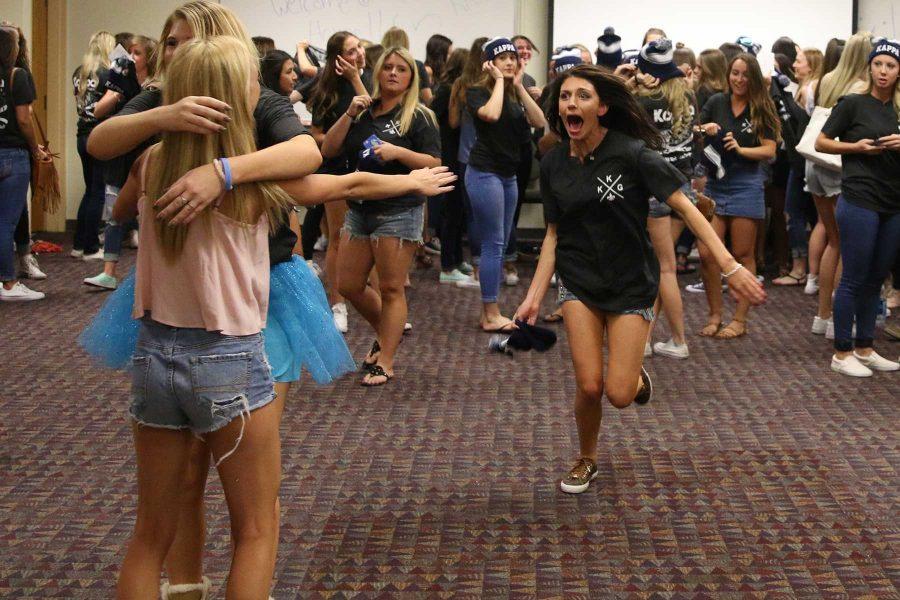 Kappa Kappa Gamma Sorority Recruits bombard each other after receiving their bid election accepting them to the sorority. (Elliott Jerge | Collegian)

“Empower women” and other related phrases are among the top favorite neoliberal phrases of today, which have especially gained momentum within the last year thanks to women-fronted movements regarding sexual misconduct, reclaiming agency from victimhood and advocating for intersectionality.

Of course, everything that starts off as a sincere gesture of advocacy in America is subsequently capitalized on and used to sell books, shirts, laptop stickers, pins and whatever else a catchy slogan can fit neatly onto. Neoliberals, or individuals characterized by their use of progressive politics for capitalistic gain, come by the thousands to pick up their Girlboss handbooks and “The future is female” T-shirts at the nearest Urban Outfitters, failing to regard the absurdity of multi-million dollar corporations actually caring about the lives and voices of women.

The truth, though cynical, is that corporate America has more sinister intentions by profiting off of and exploiting social movements.

Neoliberals, while well-intentioned, are the first to be fooled by these progressive marketing strategies employed by the likes of Nike, Apple, Gillette and dozens of other corporate giants in the last year. In “The End of Progressive Neoliberalism,” Nancy Fraser discusses the issues with “woke” capitalism.

“In its U.S. form, progressive neoliberalism is an alliance of mainstream currents of new social movements … joined with the forces of cognitive capitalism. … These liberal-individualist understandings of ‘progress’ gradually replaced the … anti-capitalist understandings of emancipation that had flourished in the 1960s and 1970s.”

In other words, social liberalism is the new route in which capitalist and class discrimination prevail.

Corporate pandering has its own implications when applied on a larger societal scale, but it also has its place on Colorado State University’s campus.

If this idea was coming from any other organization than the one that aims to create divisions based on physical appearance, class and social status, it might mean something – but it doesn’t.

Sorority members around campus have been passing around “Empowered women empower women” paraphernalia this past week as part of their Panhellenic Sorority Recruitment. The sentiment of togetherness evoked by “Empower women” is uplifting, especially given how long women have endured being pitted against each other for the sake of dismantling power through unity.

If this idea was coming from any other organization than the one that aims to create divisions based on physical appearance, class and social status, it might mean something — but it doesn’t.

The purported goal of the “Empowered women empower women” campaign is to give women an opportunity to join forces with one another, help them challenge adversity and perhaps create a stronger support system, but if this were the case, Greek life would be accessible to all women.

The process of choosing sorority members based on superficial standards combined with the considerable membership fees constructs a system that is entirely based on exclusivity and distinctions of status.

In 2013, an analyst with the Office of Institutional Research at the University of Minnesota Twin Cities, Krista M. Soria, released a comprehensive analysis of the wealth gap in Greek life, noting that not only do they lack racial and cultural diversity, but they are also largely composed of upper-middle-class individuals.

Herein lies the problem of the “Empowered women empower women” campaign: neoliberal feminism is seemingly meaningful, but at its core, it doesn’t hold any importance.

Greek life, which is essentially an elitist networking hellscape privy to the upper-middle classes, isn’t inherently empowering. You can say it’s empowering, and you can even invoke topical feminist tropes, but a movement can only be empowering if it is inclusive — and yes, that extends to people of working-class means or status.

A campaign as precarious as “Empowered women empower women” is, at best, a cliché. But at its worst, it’s damaging to women who don’t have the means to join this community that gives others access to important connections and possible career opportunities.

When an organization that maintains elitist principles claims empowerment in an effort to gain members, it’s worthy of skepticism. “Empower” should be a word reserved for building a platform for the disenfranchised — not for sticking on a piece of merch.