The Rocky Mountain Collegian • May 8, 2019 • https://collegian.com/articles/opinion/2019/05/category-opinion-leibee-morality-should-be-one-of-ascsus-priorities/

Leibee: Morality should be one of ASCSU’s priorities 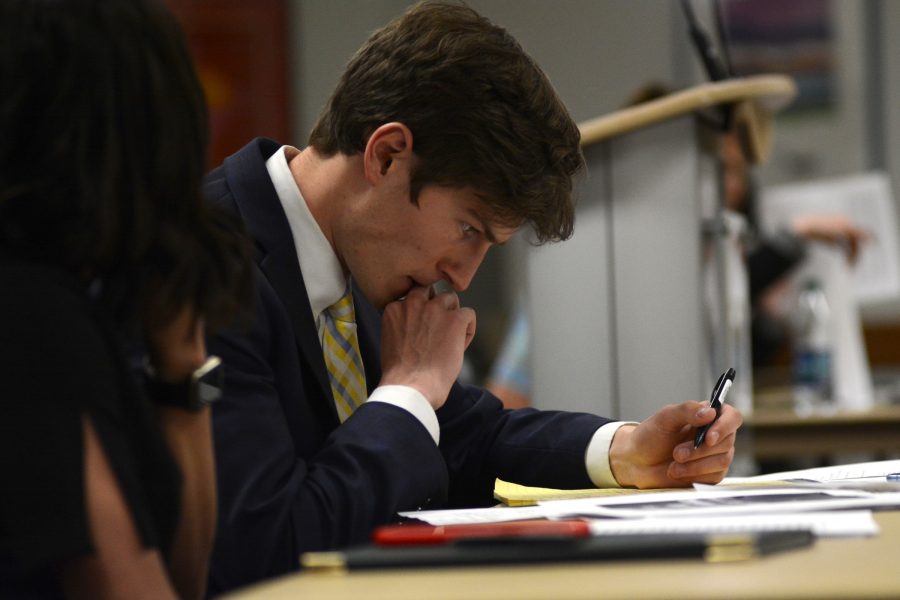 Associated Students of Colorado State University President-Elect Ben Amundson reacts to a statement made by the complainants during the ASCSU hearing May 7. (Forrest Czarnecki | Collegian)

Editor’s Note: All opinion section content reflects the views of the individual author only and does not represent a stance taken by The Collegian or its editorial board. Jayla Hodge is the opinion editor of The Rocky Mountain Collegian.

Tuesday night’s appeal of the Associated Students of Colorado State University election left President-elect Ben Amundson grasping to the fact that, while his actions may have been immoral, they were not technically illegal.

“The court is not about morality,” Amundson said in response to claims that he used his freedom of speech to silence others.

No matter the legality of the situation at hand or what witnesses, defendants or complainants say, the president of ASCSU should care about morality and the ethics of the situation.

The president-elect, of all people, should not only care about the image of ASCSU and what he has done to it already, but how he has damaged the respect that his administration will get from students.

In a witness statement to the court, Jayla Hodge said Amundson admitted to stealing and throwing away newspapers, which is completely illegal. What is worse is that — if this is true — he lied about it and continues to lie about it. Further, Amundson has yet to apologize.

Rather than apologizing for his campaign allegedly verbally harassing others, even if that is not the truth, he countered by saying he was disrespected by other campaigns. In a childish manner, he ultimately implied he can disrespect others because they disrespected him.

The bottom line is that the president-elect is lacking morality and professionalism. It’s not about the situation itself, but his reaction and what he said in response.

Amundson reminded everyone on Tuesday that he didn’t do anything illegal. He failed to report campaign finances, engaged in shady acts and disrespected other campaigns. Even if he does not believe he ran an illegal campaign, he still ran an immoral and dirty one.

Amundson said that despite all of this, it’s not relevant to the outcome of the election, referring to his win by a large margin.

First year business student Cat Blouch said, “I tried to change my vote,” after hearing about the misreporting of campaign finances, and especially after learning about the destruction of newspapers. Having voted on the first day, it was too late.

Blouch might not be the only one who fell victim to a misinformed vote. The reprinted copies of the story that was thrown away came out on a snow day, a day where students were sparingly on campus. Due to the actions of Amundson and his campaign, many students likely voted without all of the information.

The bottom line is that the president elect is lacking morality and professionalism. It’s not about the situation itself, but his reaction to it and what he has said in response.

It must be noted that the complainants may not be entirely in the right, either. It should be questioned whether the students accusing the campaign are doing it because they care or because they are unhappy with the results of the election and want to see Amundson impeached.

Amundson noted verbal harassment toward him personally, and those accusing him come from the Braun-Taylor campaign, who came second in the election. Despite this, the complainants are not the ones failing to professionally represent ASCSU.

As the only representative from CSU in Fort Collins that sits on the Board of Governors and holds a voting position, Amundson will be the voice for the thousands of students that go here.

Ultimately, the job of the president is to represent students, not to hold an office for personal gain. Amundson should face the consequences of everything that has happened because he was directly involved and he ran an immoral campaign.

Amundson claims that students voted for him because they believed in him, but really students voted on misinformation and a false, fabricated sense of trust.