Seriously: Many Coloradans to get married on 4/20 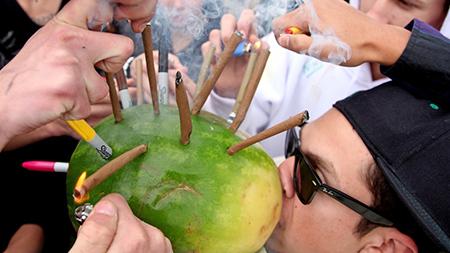 Alex Foster, from Colorado Springs, takes a toke on a hollowed-out watermelon loaded with marijuana blunts on 420 in Boulder as friends and complete strangers provide combustion. Amendment 64, passed yesterday, legalizes the individual possession of an ounce of marijuana.

FORT COLLINS –  Not only is weed smoke in the air this 4/20, but love is as well. Fort Collins, Boulder, and Denver area city officials are expecting a massive turnout of couples looking to apply for marriage licenses Saturday.

The Larimer county clerk’s office has called in all hands on deck in order to assist the massive amount of Colorado couples wanting to get married. They expect over 100 couples to be coming into their offices to either get a marriage license or make their marriage official.

Why the surge of couples looking to tie the knot? CSU grad student Mary Jane Parker explains why she and her boyfriend Kyle, along with hundreds of other couples, want to get married on 4/20.

“I realized that if we get married on Saturday, our 50 year wedding anniversary will be on April 20th, 2069,” Parker said.

With such a sweet date to celebrate 50 years of marriage on, many others are making similar plans. The couple told all their stoner friends, who in turn told all of their friends, and the idea spread like wildfire from friends couch to friends couch.

“Instead of ‘tie the knot’ we’re referring to getting married as ‘rolling the blunt’,” CU student Tana Hannah Caraway said. “It’s super romantic!”

The romance will certain be in the air at the annual 4/20 Rally in Denver. With sponsors like Red Bull and Uber, the rally is the biggest marijuana related event in the country. A free event, the official rally draws people from all across the nation in celebration of the Devil’s lettuce.

For the first time the church, in the form of some ordained priests, will be at the rally. They will attend the rally to marry any couple who wishes to have their eventual 50 year anniversary be on 2069 (nice) with thousands of witnesses to make it legal.

“It is great that all these people are coming together in holy matrimony, even if it is in celebration of Satan’s spinach,” one Denver area priest said. He and several other clergymen will have their own booth set up complete with communion bread and wafers for those with the munchies at Civic Park.

This marks a huge step forward in the relationship between the stoner community and church. The church may finally stop referring to weed as “the fallen angel’s flora.”

With all the proposals, marriages, and church participation this will be a 4/20 to remember.