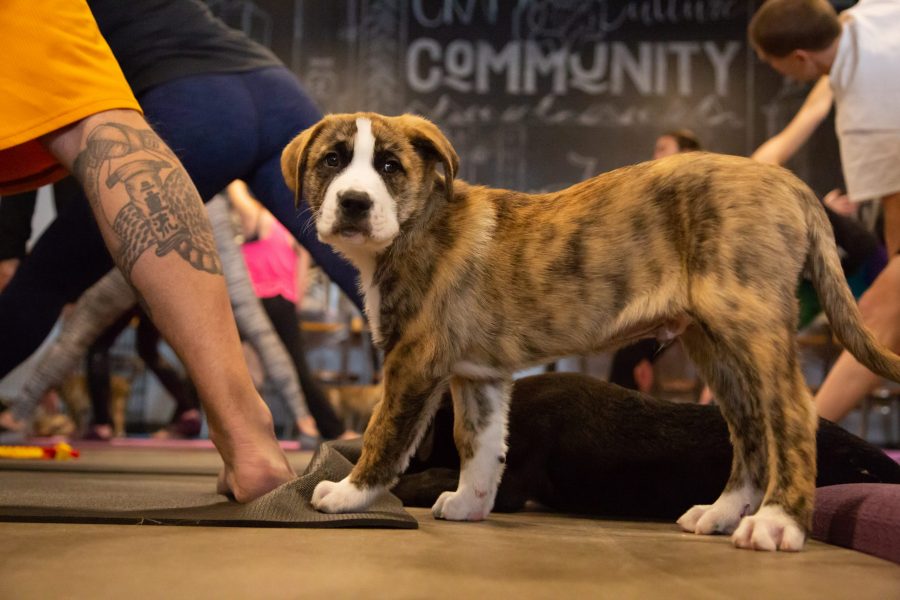 Puppy Yoga is instructed by Kaitlin Mueller at Maxline Brewing Feb. 10, 2019. The puppies run around so much, they start to tire out towards the end of the session. (Clara Scholtz | Collegian)

With The Associated Students of Colorado State University presidential and vice presidential elections on the horizon, the presence of cute dogs on the Plaza has gone up drastically. Candidates believe that puppies make them appear friendlier, but the dogs may not be entirely on board with the campaigns.

ASCSU dogs announced their boycott against campaigns this past Monday. The dogs officially asked to no longer be associated with the candidates.

“We want students to vote on the merit of the candidates, not just on who has the most dogs. We felt uncomfortable being blatantly used as advertising tactics.” Hercules, ASCSU dog

In an exclusive interview with The Collegian, Samuel Braun and Madison Taylor’s most well-known campaign dog Hercules barked, “I am honestly tired of being used as a campaign tool. They are not even providing the treats they promised me.”

Braun and Taylor’s dogs alongside Ben Amundson and Alexandra Faria’s dogs came together in a meeting Sunday night to discuss their separation from the campaigns as well as to discuss possibly running independently.

Hercules mentioned in the meeting that he was “uncomfortable being associated with Samuel Braun, a member of the Student Fees Review Board, when the use of student fees are currently questionable and unclear.”

Amundson and Farias’ campaign dogs Gizzmo and Bodhi said the conversation with Amundson regarding their official leave from the campaign was difficult, but they knew it was the right decision for them.

“Gizzmo and I have nothing but respect for Ben and Alex,” Bodhi said. “But we feel it is in Colorado State University’s best interest for us to run independently.”

Gizzmo and Bodhi will now be running for president and vice president of ASCSU on the platforms of allowing anybody and everybody to chase campus squirrels, using student fees to provide unlimited access to treats and providing free parking to students in exchange for pets. Bodhi borked that they want to “honor the intentions of Ben and Alex.”

As part of his efforts towards inclusion at ASCSU, Amundson said that he wants to show kindness and friendship, something ASCSU is not currently known for. Gizzmo revealed that this was what made him originally want to join Amundson and Farias’  campaign, but he now believes that dogs are the friendliest and kindest beings that could be elected to the position.

Hercules discussed possibly acting as a campaign manager for Gizzmo and Bodhi.

“We want students to vote on the merit of the candidates, not just on who has the most dogs,” Hercules said. “We felt uncomfortable being blatantly used as advertising tactics.”

There was even talk of making their own governing body, The Associated Dogs of Colorado State University, but Hercules said that they will all wait for the election results.

Katrina Leibee can be reached at letters@collegian.com or Twitter at @KatrinaLeibee.