Thompson: Trump’s border wall will be a disaster for the environment 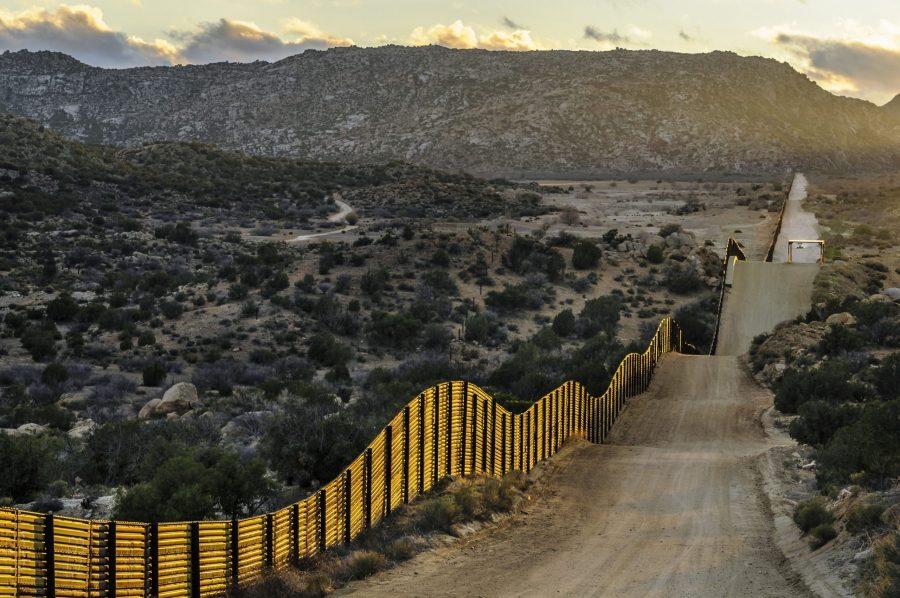 April 7, 2018 - Jacumba, California, U.S. - Image shows US border fence looking southwest on the Mexico border with mountainous terrain. This type of barrier is generally called "landing mat," a reference to the use of steel panels from the Vietnam War era which helped helicopters land in jungle areas. Landing mats are an early approach to creating a barrier on the US border with Mexico, to prevent illegal crossings. The structure is made of steel panels welded together and attached to vertical steel columns that follow the contours of the land. The structure varies in height from 5 to 10 feet, so it is effective against vehicles, but easily climbed by people on foot. Later versions of the border fence use superior construction designs to prevent illegal border crossers. The fence is not a contiguous structure across the US boundary with Mexico, but is found in segments where relatively higher frequency of attempted border crossings occur. (Credit Image: © Gary Moon via ZUMA Wire)

With the threat of climate change constantly looming, we don’t need anything else working against the environment. President Donald Trump’s border wall would do just that.

Securing funding and erecting a border wall is not a national emergency, and it is an unquestionably wasteful use of taxpayer money.

Even though the Rio Grande river is geographically distant from the state of Colorado, climate change permeates borders, real and perceived. This demands our attention and action as global citizens. We must say “this is something we won’t stand for.”

A border wall will not only be a financial disaster, it will also cut off water access and migration patterns for a multitude of species. The construction would also emit millions of tons of carbon, even potentially raising gas prices.

Trump’s goal is to build a new stretch of 1,000 miles of border wall, as well as reinforcing 634 miles of existing wall. A study by MIT Technology Review found that the proposed wall construction would emit nearly 7.8 million metric tons of carbon dioxide.

Without uninhibited access to these resources, there could very well be several local extinctions, with bigger implications for the ecosystem.

That’s the same as the emissions of 823,654 homes over the course of one year, and that’s the low estimate. According to the MIT study, the “ongoing maintenance, re-routing of traffic, and other unforeseen consequences could all push the figure far higher.”

The Trump Administration’s proposed border wall would also cut off access for a multitude of species to the Rio Grande. According to the Rio Grande International Study Center, the river “serves as a critical wildlife corridor, and is home to a wide diversity of plants and vegetation.”

A Stanford study found that almost 350 species would lose access to half of their habitat if the border wall proceeds as planned, including the endangered jaguar and ocelot. With climate change on the horizon, species will also be impacted by shifting migration patterns.

The National Butterfly Center is one such sanctuary that will be impacted by construction. The center is home to over 300 species of butterflies and several endangered plant and animal species, such as the Texas tortoise and horned lizard.

According to a paper written by concerned scientists, the border wall would eliminate, degrade and fragment wildlife habitats via land clearing, disrupting seasonal migration and blocking access to food and water. More than 2,700 scientists signed on in support.

Without uninhibited access to these resources, there could very well be several local extinctions, with bigger implications for the ecosystem.

The Endangered Species Act, the Migratory Bird Conservation Act, the Clean Air Act and the Safe Drinking Water Act were all waived as a means to move forward with construction.

But the fight isn’t over yet. In response, several environmental and animal rights groups, such as the Animal Legal Defense Fund and Defenders of Wildlife, are suing the Department of Homeland Security on the grounds that they do not have the authority to waive such laws.

While the threat is spatially distant, the consequences are immediate. There are no benefits, and it is nothing more than an asinine display of power.

It would be wrong to characterize these consequences as unintended. While we might not be able to predict exactly what the impacts will be, knowing what we know, the perceived short term gain is not worth the long term consequences.