Stanfield: The problem with #BelieveWomen 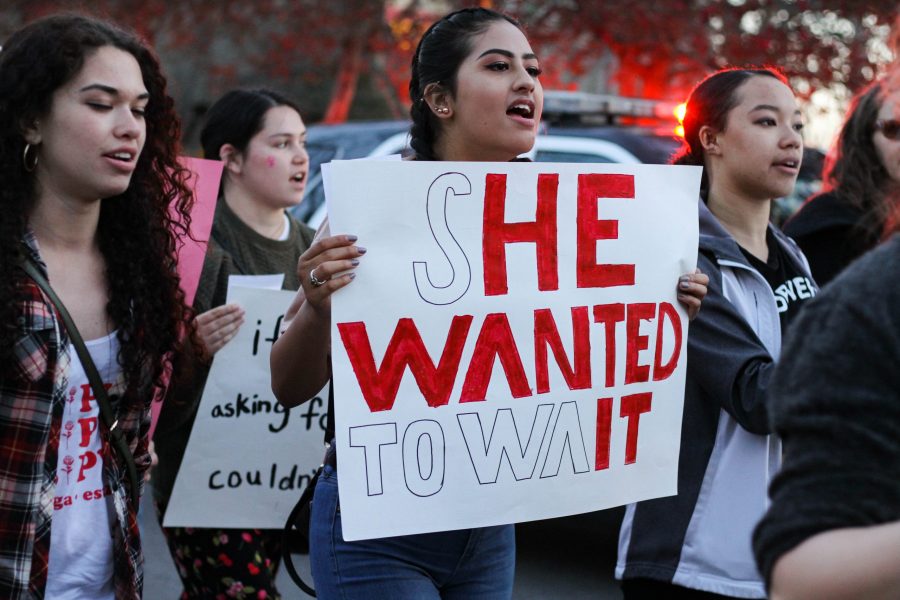 Participants of Take Back the Night march through the streets of Old Town with signs expressing messages of solidarity with survivors of sexual assault and domestic violence. (Ashley Potts | Collegian)

Many are looking for ways to shift our society towards being more trusting and less condemning to those who have been victimized. #BelieveWomen is a well-meaning but unfinished idea that we as a culture must continue thinking through.

A watershed moment in American culture, the Me Too Movement is characterized by a nationwide outpouring of accounts of sexual assault and a demand for consequences for the assailants.

This push to take survivors of assault seriously is necessary and noble but the move by some to encourage society to believe women, in particular, is not the same as pushing the populace to believe survivors.

#BelieveWomen is problematic because it perverts a movement designed to legitimize the survivors and equates women with victims by definition.

Using women as a term that is interchangeable with survivors obscures the plight of men who are victimized as well. Therefore, #BelieveWomen does not serve survivors as a rallying cry for their pain to be heard. Instead, it further politicizes a ‘social evil’ and creates a hierarchy of victimhood in which women are ranked higher than men.

This also perpetuates the myth that women are the world’s victims. If history has made anything clear, it is that women are much more than that. While they have often been denied the same rights as men they have also played an active role in shaping history and society.

Ignoring this and framing women as victims also ignores their potential to be perpetrators of human evil.

The National Sexual Violence Resource Center reports that false claims amount to between 2 and 10 percent of reports. While this rate is not particularly higher than rates of false reporting found in other types of crime, it does demonstrate that there is a problem with claiming that people should believe an entire gender.

Women are people and people lie.

Women are people and people lie. Thus anyone who argues that people should simply believe women is not taking the humanity of the fairer sex seriously. It should be our mission to find a way to recognize both the valid claims of survivors and the social anxiety regarding unfounded accusations.

Opting to create dangerous slogans that eliminate any potential opportunity for nuance is not the answer.

The idea that people should #BelieveWomen is dangerous because it ignores the fact that throughout American history women’s, almost exclusively White, claims of sexual assault have been used as a tool to demonize and incarcerate men of color.

Take for instance Carolyn Bryant Donham, the woman who accused a 14 year old Emmett Till of aggressive sexual impropriety. This was an accusation that led to the young boy being tortured and tied to a cotton-gin before being thrown into a river. She admitted that this report was fabricated in 2017.

Fallacious claims like this hardly remain a purely historical phenomenon. The National Registry for Exonerations has stated that a Black prisoner convicted of sexual assault is “three-and-a-half  times more likely to be innocent than a White sexual assault convict.” Additionally, African-Americans make up only 13 percent of the population but “constitute 47 percent” of exonerations prior to 2016.

What this demonstrates is that the movement to #BelieveWomen is simply not dealing with the facts of the matter.

It ignores the fact that a significant amount of accusations made by women are false, dangerously false. This can be true even if claims of sexual assault are not false a majority of the time.

We should believe survivors and not simply believe women. Not all women are victims and not all victims are women and without a doubt, at least some women are mistaken and some are willing to lie about the worst of crimes. That is an uncomfortable fact but it is one we have to deal with.